Abbi and Ilana set a new standard for best friendship. Here are the top 10 times they've had each other's backs 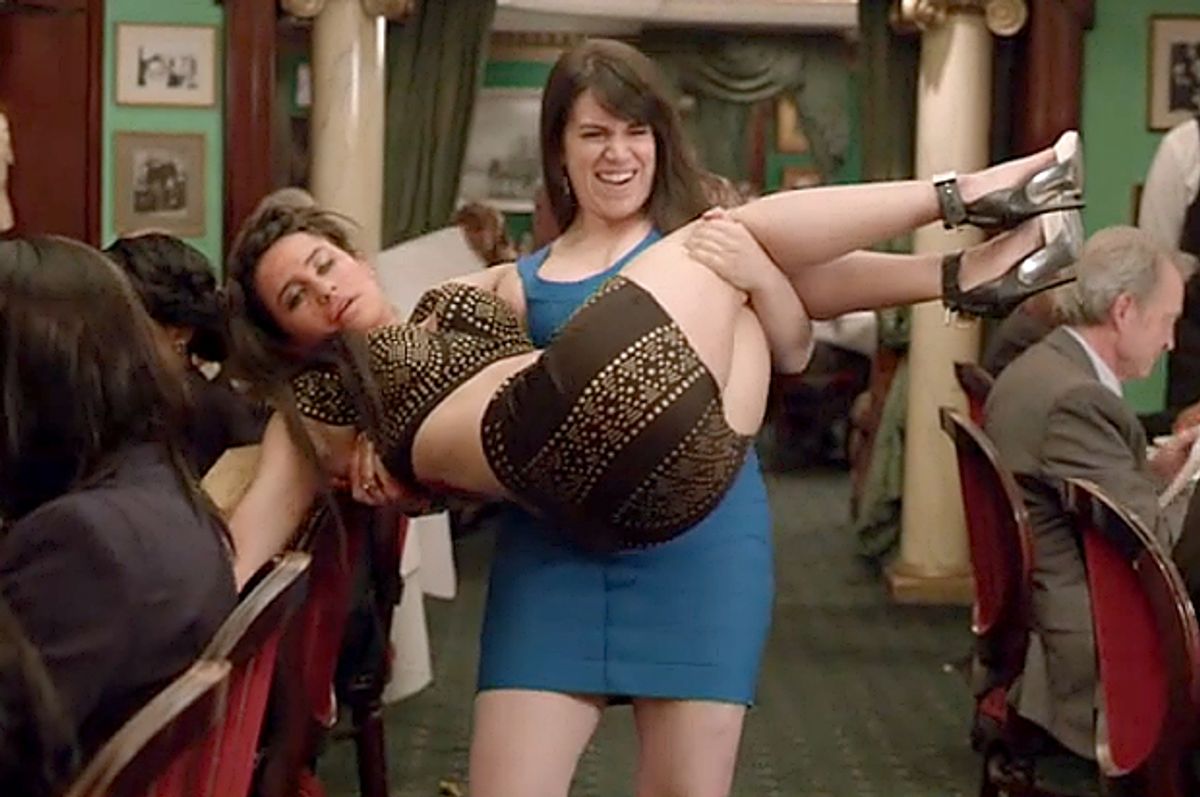 One Sunday evening the summer before my senior year of college, my best friend Brianna and I were walking into the grocery store together when she dropped a bomb in the parking lot. "You know," she began, "if we were in a relationship, I'd probably be thinking about proposing to you soon."

I've been waiting to see the same thing happen on "Broad City," but I guess I don't really need to: Abbi and Ilana have proven time and again that they have the same sort of wholly dedicated, genuinely pure, romantic-without-actually-being-romantic best friendship that countless viewers aspire to have, or have had in real life. It's a beautiful thing -- and it's been affirmed over and over through the duo's many odd adventures and the numerous times they've had each other's backs. Here (in no particular order) are 10 of Abbi and Ilana's best best friend moments:

1. They both have BFF Skype sex.
The opening scene of the "Broad City" pilot perfectly sets us up for Abbi and Ilana's entire dynamic: The two are close enough to have Skype sex, which for them means video-chatting with one another while simultaneously getting it on with a dude. Ilana, as always, is a little more open, calling Abbi while she's in the act with Lincoln; in a later episode, we learn that Abbi waits to call her BFF until her boring sex partner is asleep next to her.

2. Ilana acts as Abbi's "doo doo ninja" when she can't flush her toilet.
How many people would wrap their best friends' poop up in duct tape and discreetly sneak it to the garbage chute under their shirts? How many people would do that with their own poop? Ilana's readiness to help Abbi with her toilet troubles set a new gold standard for being a pal.

3. They stick together, even when they get maced in the face.
After Abbi bug bombs her apartment and Ilana gets the pair locked out of her apartment, both end up getting pepper sprayed before being sent back out into the city, homeless and tear-stained. But do they ever leave each other's side? Nope -- and Ilana even buys Abbi's artwork later that same day.

4. Abbi accompanies Ilana to her new beau's cringe-worthy improv show.
When Ilana meets her sexual soul mate, Tyler, Abbi willingly joins her at his "show." Turns out, it's some of the worst improv they've ever seen -- and not only does Abbi sit through the whole painful performance, she watches more of it than Ilana.

5. Ilana goes with Abbi to Trey's awful party -- and then she meets Val.
When Ilana agrees to trek to Hell's Kitchen with Abbi for Trey's weird, sad little "party," she also manages to help her find a way out of it so their night isn't totally ruined. And, as payback, Abbi gets blackout drunk and introduces her best friend to her alter ego, Val.

6. They chase a "street kid" down St. Mark's to retrieve Abbi's (great) birthday present for Ilana.
Things get uncomfortable when Abbi and Ilana chase a thief into a fancy East Village townhouse, where they encounter one of the most awkward mother-son moments ever in order to take back Ilana's stolen birthday present. Of course, it's all worth it in the end: The spooning Tupac comforter Abbi gets her is the best gift Ilana never could've asked for.

7. Ilana uses her "nature skills" to help Abbi out of a literal hole.
If it weren't for Ilana's outdoor preparedness, Abbi might've been stuck forever at the bottom of a giant ditch in Prospect Park. But her best friend offers up everything she needs to get comfortable (a joint, a joint and another joint), then goes off on a treacherous search for the dog wedding gazebo so she can find help.

8. They brave the Beacon's Closet selling counter together.
Sure, maybe Ilana inadvertently got Abbi into the mess that resulted in her needing hundreds of dollars to replace a broken mirror at Soulstice, but she does what she can to help her bestie out. The pair goes together -- twice! -- to see the mean Beacon's Closet buyer, and the second time it's with fancy shmancy clothes Ilana acquired just for Abbi's sake.

9. Ilana does her best to take care of Abbi when she gets her wisdom teeth removed (and makes up for failing).
When Abbi's mom can't take care of her following her wisdom teeth removal, Ilana steps in as her caretaker. She does a pretty good job of feeding Abbi too many painkillers, dressing her up in terrifying makeup and making her an insane weed smoothie, but Ilana shows her true dedication by tracking down her best friend at the Gowanus Whole Foods after failing miserably to watch after her.

10. Abbi carries Ilana out of a restaurant when she goes into anaphylactic shock.
OK, while these best friend moments were meant to be in no particular order, this one still might be the one that takes the prize: When Ilana has a debilitating allergic reaction to shellfish on Abbi's birthday, Abbi harnesses her strength (and the excess adrenaline she got from an inadvertent epinephrine shot) and carries her best friend to safety. It's a beautiful moment in the final "Broad City" edit -- as well as in a less glamorous, but equally hilarious outtake.