Trevor Noah and "The Daily Show" problem: Why do we insist on holding a TV host to a politician's standards? (Updated)

We think of Jon Stewart as a progressive leader of sorts, not a TV comedian -- and who can live up to that? 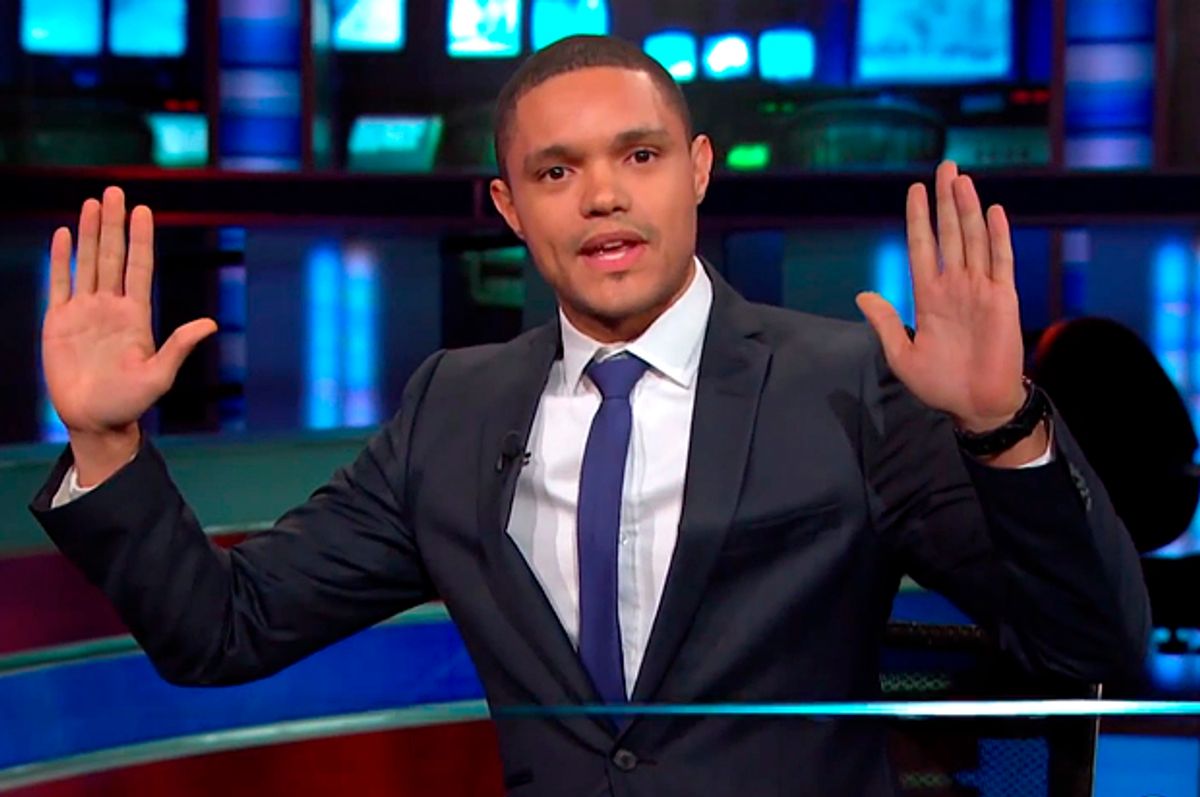 Let us now engage in an act that I’d like to call “restoring our collective sanity,” or instead: Restoring Context to Trevor Noah’s Dumb Tweets. Oh yes, context. That thing that has been so conveniently cut away from this frenzy of accusation over, literally, 140-character long brain farts.

In terms of pure comedy, Trevor Noah’s jokes are mean-spirited largely because they are bad. A joke about “fat chicks” or “the Jews” falls very flat when the delivery and punch line are purely, “[identity category], amirite??” It’s a form of humor that relies entirely on positioning some other category of people as “Other” in order to get a laugh, and any comedian would tell you, that’s a weak, tired approach.

That being said, a lot of comedians do it, all the time. Who makes fun of fat chicks? Stand-ups as varied as Joan Rivers, Kevin Hart and Louis C.K.; sitcoms ranging from “Louie” to “New Girl” and “Friends.” And who makes fun of Jews? Well, here’s a whole list, and that’s just a list of people who don’t identify as Jewish. Comedy is built for mockery and skirting the line of offensiveness; that is what it is for.

Because, oh yeah: Trevor Noah is part-Jewish (specifically, according to his own words, his Xhosa mother is half-Jewish). So here’s this part-black, part-Jewish guy, telling jokes in South Africa, a country with a long, storied history of anti-Semitism that continues in some capacity today. Is that good? Absolutely not—it’s really fucked up, to be honest. Are his tweets in poor taste? Oh, sure. But does he get to do it? Yeah, I think so. We process a history of hatred by joking about it, and Noah’s got a right to.

It would be great if people, in general, didn’t say dumb things, Trevor Noah emphatically included. But clearly, these are all sentiments that a ton of comedians have, and they all make sense for Noah’s until recently entirely South African audience. (South Africans, like the rest of the world, also skew far more pro-Palestinian than pro-Israeli).

So what is the problem, really? That Noah typed out the jokes on Twitter, a medium where anything and everything can be taken out of context? That neither he nor Comedy Central had the wherewithal to delete those tweets? It’s true that of the many comedians I’ve discussed above, their jokes about “fat chicks” or “Jews” weren’t on Twitter, because Twitter is literally the worst possible place to make sensitive jokes. But then what are we doing, accusing Trevor Noah of not using Twitter right? Of not being sensitive enough? We're describing a political gaffe. But while "The Daily Show" is politically significant, it is comedy. Noah is a comedian; it’s his job to be provocative. As the host of “The Daily Show,” he’s going to have to be a bit more middle-of-the-road, yeah, if he wants to retain Stewart's base. But he wasn’t the host of “The Daily Show” in 2011, so he really didn’t have to be anything at all.

It seems like what’s happening is that fans of “The Daily Show” are sad that Jon Stewart is being replaced with someone who might not be worthy of his chair. Why not [insert your fave]? They would never [insert chosen offense]! As such, the choice of a comedian for a humorous news show has become an extraordinarily political decision, with about as much scrutiny as a presidential appointee. It's a lovely testament to the power of "The Daily Show," but this is television, guys, not politics! Comedy Central isn't vetting this guy for possible political vulnerabilities, they're trying to find a good investment. Maybe he's an anti-Semite fat-woman-hater, and maybe he's not. But it sounds like a whole bunch of us will be watching "The Daily Show With Trevor Noah" to find out. And that is all that he, or Comedy Central, is trying to do. These tweets? Not great. But worse happens online on a regular basis.

Which leads me to the white elephant in the room, one that I predicted would happen just yesterday. Is this level of backlash a little outsize? Is this level of hand-wringing outrage warranted? How many people who are complaining about Trevor Noah know the current status of their favorite white comedians’ anti-Semitism or pro-Zionism or fat-chick-enthusiasm? There is baked-in hypocrisy here, just as much as there are some terrible, idiotic jokes.

The thing is, if anyone is anti-Semitic, they should be judged for that, and if anyone actually hates fat women, they should be held to account for that, too. But we’re not taking this torch-and-pitchfork party to people who actually are anti-Semitic and hate on overweight women. We appear to be taking it to this one guy who sticks out literally just because he sticks out. Because he took a job that was held by a white guy with acceptable viewpoints toward Israel? What's the context to that?

UPDATE: I've learned since posting (thanks to Maha Rafi Atal) that South Africa's population is quite polarized around the Israel/Palestine conflict, using it as a proxy for decades-long racial tensions. If anything, that further indicates that that Noah's stance on Israel is part of a context specific to that nation.