Trevor Noah is more than his worst joke: Yes, it's possible to talk about those tweets without losing perspective

The future host of "The Daily Show" has said some awful things. He's also been a hilarious voice for justice 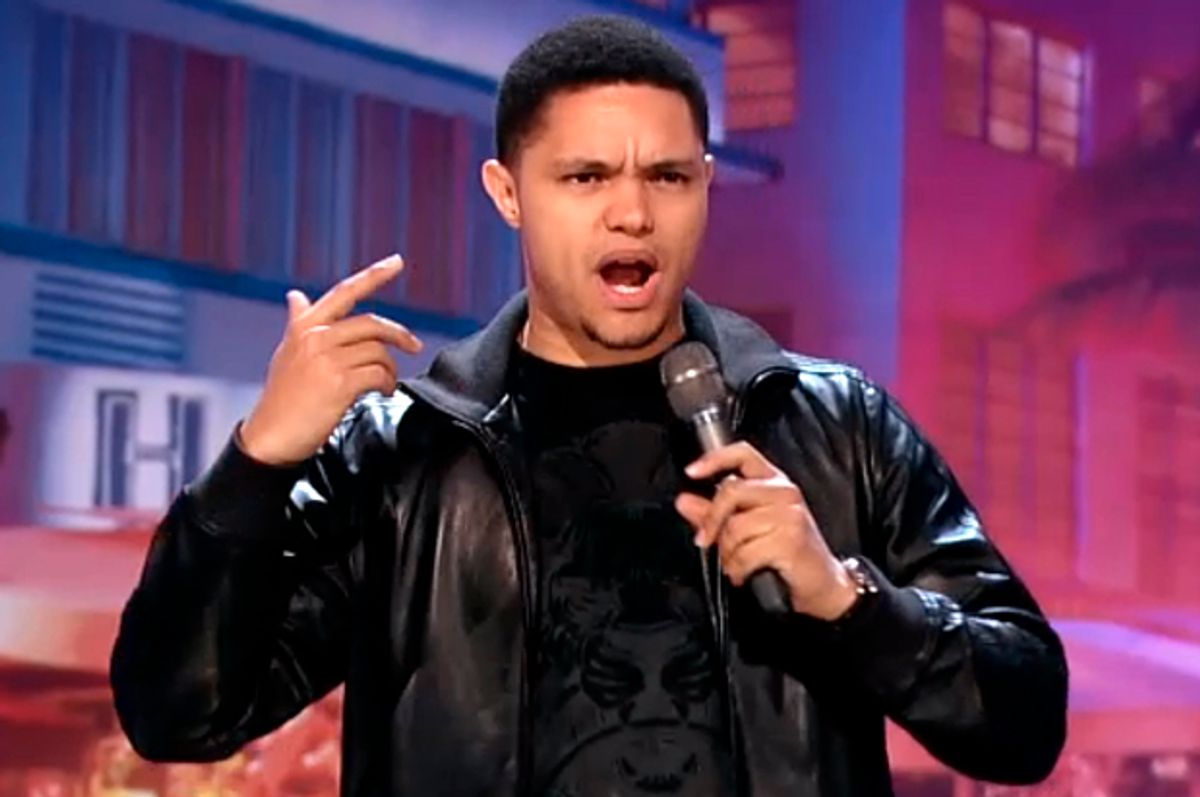 TREVOR NOAH IS THE FUTURE OF COMEDY AND THE DEATH OF THE LEFT AND SOMETHING ELSE THAT WILL DEFINITELY NEVER EVER CHANGE SO STRAP IN, AMERICA.

Just kidding, you guys. Let’s all visualize a peaceful clearing and look at my colleague Lindsay Abrams' slideshow of baby animals and breathe deep for a second.

Trevor Noah, who was recently tapped to host the “The Daily Show” after Jon Stewart's departure, is having his moment in the news cycle. After a few rounds of Who Is Trevor Noah posts, the story has now become his Twitter feed. Turns out, he's made some pretty awful jokes.

Noah has tweeted about 9,000 times in the last six years, and a handful of those tweets are vile. I don’t know what, if anything, six or so tweets of fat-phobic, sexist and anti-Semitic jokes say about the future direction of "The Daily Show," but I do know they are lazy and gross. It's not being overly sensitive or censorious to call that out and say, Do better.

His comments matter, but they are also not the final word on the guy. Because people are complicated, and using someone's shittiest moment as a barometer of who they really are is a pretty terrible way to move through the world. (I know I have done this before, and it generally feels terrible in retrospect.)

But that also doesn’t mean that the people critiquing Noah right now are just fueling the outrage machine. Those who rail hardest against “outrage” culture are often people who felt very comfortable for a long time not listening to anyone who didn’t look or sound like them. The Internet, slowly and often clumsily, is making such comfort hard to come by. Plenty of pieces out there right now about Noah’s bits about black Americans or his fat-phobic jokes are worth reading.

Like these tweets from young adult author Rainbow Rowell, which nicely explains why she no longer shrugs off fat jokes:

As a fat person, I've listened to fat jokes my whole life. From people I liked. On shows I liked.

And there was always this feeling of "This is life. This is what you have to put up with to be alive and fat. It's pointless to get angry."

Only recently have I allowed myself to think that might not be true. That it might be *reasonable* to be alive fat & not feel constant hate.

She also said this:

(Am now thinking of my own past ignorance and cruelty and trying not feel so judgmental.) (Still trying.) (Will continue to try.)

Or this, a piece from Wendy Todd at the Washington Post on Noah's jokes about black Americans:

Then Noah joked that black people are misidentified as African Americans. “They’re not African, but we’ll play along,” he said, adding, “Many of them really try to connect with Africa, you know? Some of them have these African names. They’ll be like, ‘Yeah, yeah, that’s my girl Wanda, yeah, yeah. Yeah that’s right, that’s Dashiqua, or dat’s Taniqua.” Noah emphasized all this “hilarity” by using stereotypical B-Boy hand gestures to drive it home — because this is how all black people communicate, obviously. Leno’s predominantly white audience ate it up.

This isn’t empty outrage. This isn’t spoiling someone else's fun. It isn't fair to caricature Noah based on a few tweets, but it's equally unfair to be reductive and cartoonish about the people saying that they had a problem with his jokes.

I don’t think the success of a joke rests on whether it punches up or punches down. (Though I do prefer jokes that punch up because comedy is a powerful tool to fight oppression and the world is terrible enough already so geez just ease up everyone.) But there’s some kind of rule about comedy that most people can probably agree on, and it’s that if you’re going to be offensive for the sake of being offensive, then you're taking a risk that could inspire backlash. And if you're taking that risk and want to get people to understand why, you’d better be really fucking funny while you’re doing it.

Noah’s jokes, though, failed to do that. They were lazy. I am not a comedian or a joke doctor, but I think it’s pretty obvious that "edgy" jokes usually provoke other people into thinking about something in a new way or maybe bringing a critical eye to their own bullshit. These jokes don’t do that. At all.

And the string of remarks that people are talking about right now weren’t unearthed from his 8th grade diary, either. They’re things he’s written as recently as last year. They are fair game, but they also don’t tell you much about the kind of host he’ll be or the kinds of progressive politics he holds, which he's demonstrated in plenty of other tweets and bits.

None of this means that Noah can’t address what he’s said. If we can each get a little better at acknowledging that humans are flawed and complex and sometimes good and shitty in equal measure, then maybe Noah can say, “I understand why people are upset, and it’s not out of line to call bullshit on rotten jokes. I can’t say I won’t upset people again, but those tweets were lazy and I’m not going to pretend they are some sterling example of comedy that pushes taboo.”

There’s something of a detente going on right now between a cartoon idea of what a comedian is and an equally ridiculous idea of a progressive on the Internet. Making a lazy joke that hurts people doesn't mean you are a fundamentally awful person, but there's no reason that bad jokes need to be defended as comedy speaking truth to power when they are more like a wet fart, discourse-wise.

Acknowledging as much may not bring world peace, but it may mean there is one less hot take in the world. And that's probably something we can all get behind.