Science wouldn't lie: You can bring a corpse to orgasm

The bizarre but true science, and other strange facts about sex 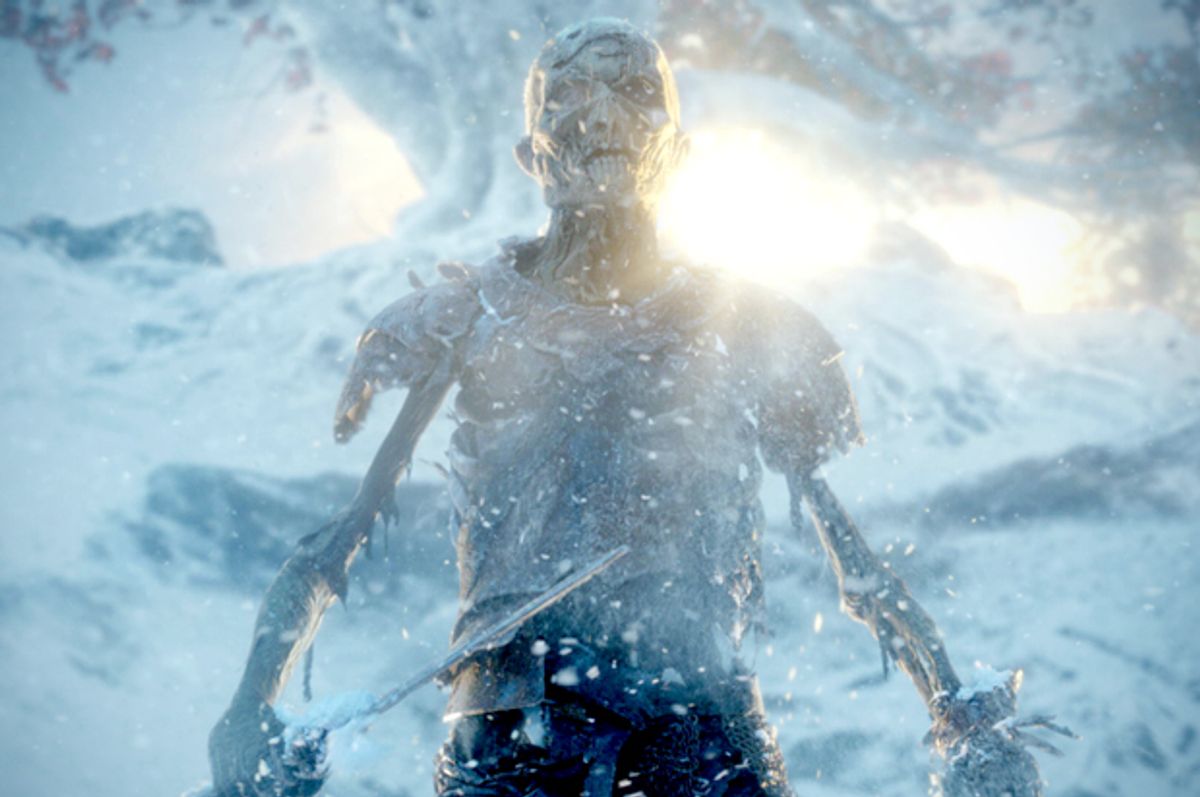 Science has made many groundbreaking discoveries through research and experimentation (and sometimes guessing and getting lucky). But sometimes we wonder how certain experiments came to be in the first place. For instance, the study that found the smell of Good ‘n’ Plenty candy increases vaginal blood flow, or the one that asked “What might be the minimal stimulus required to excite a turkey?” With that in mind, we found some of the most bizarre sex and relationship studies to share in the collective what-the-f*ckery. Enjoy.

1. Turkeys will mate with a head on a stick.

Let’s start with the excitable turkeys. In the far-out 1960s, researchers Martin Schein and Edgar Hale of the University of Pennsylvania determined that male turkeys would try to mate with female turkeys who, well, were half the gals they used to be. Researchers started by removing from the female a wing, a tail, etc., part by part, until all that was left was a head on a stick, which the male turkey determined was still good enough to have sex with. And you thought men were unfussy when it came to sex partners! The male turkey would not, however, try to mate with the opposite setup — a turkey body with no head attached. Good to see male turkeys have at least one standard. Researchers theorized that male turkeys were neither leg nor breast men, but that they mostly cared about female turkey faces, which is kind of sweet if you forget about the rest of this barbaric study.

One of the amazing tidbits from Mary Roach’s excellent book Bonk, is a study from the Smell and Taste Treatment and Research Foundation in Chicago, which determined that men should step away from the Drakkar Noir immediately, as it repels women. Specifically: “Men’s colognes actually reduced vaginal blood flow.” To come to this groundbreaking conclusion, foundation director Al Hirsch had women wear surgical masks scented with 10 different aromas, and then hooked them up to a vaginal photoplethysmograph to figure out what scents turned them on, if any. Hirsch also supplied unscented masks as a control just to be sure women weren’t getting aroused by the surgical masks themselves. Hirsch figured out that women aren’t so keen on cologne, and they were also turned off by the scent of cherry and “charcoal barbeque meat.” What did turn the women on was a mixture of cucumber and Good ‘n’ Plenty candy. Hirsch thought this might be because women associated the candy with “fond memories of Grandma’s back yard,” which we can all agree is the most arousing image in existence. But now we know we should all be dousing ourselves in cucumber and granny candy to attract women. Thanks, science.

3. How often does sex kill people?

Sex is great and all, but should we worry about getting killed while doing the deed? Sex researcher Leonard Derogatis’ aimed to find out in his 1999 study on coitus and fatal heart attacks, aptly titled “The Coital Coronary.” A team of German researchers reviewed more than 21,000 autopsy reports to conclude that sex very rarely leads to death in men. Phew! Sex caused a fatal heart attack a mere 39 times in all those reports, and “in most cases sudden death occurred during the sexual act with a prostitute.” Lest you think Leonard was prejudiced against sex workers, he also said those stats were misleading because when men die boning their spouse, they’re much less likely to get an autopsy, as opposed to when they die having sex with a stranger. He estimates 11,250 sex-related sudden deaths in the US each year, which is on par with death by food poisoning, though the latter arguably makes for a much less interesting cocktail party story.

Perhaps the weirdest (and squickiest) study involved a dolphin-cohabitation experiment in the 1960s by neuroscientist John C. Lilly. Lilly thought he could teach dolphins to talk if they were around humans enough, and given the proper time and training. So he had his associate Margaret Howe live with a dolphin named Peter in a house that was partly flooded, so that Peter could swim around but Margaret wouldn’t drown. Soon, however, Peter began to “woo” Margaret, and when she didn’t respond, he became violent. Eventually they had to ship Peter off to the dolphin brothel so he would leave poor Margaret alone, but Lilly worried he would lose his training if he spent too much time with his own species, so back to Margaret he went. When Peter again tried to woo her, Margaret, fed up, gave Peter a happy ending. While “discovering” that a human could sexually satisfy a dolphin is a certain kind of uh, groundbreaking, Lilly’s study did not lead to any dolphins learning the alphabet. So he tried another approach — giving the dolphins LSD. It was around this time, unsurprisingly, that Lilly’s work began to be discredited, and he lost his funding.

5. Was Shakira onto something with her “Hips Don’t Lie” song?

Researchers at the University of Pittsburgh and University of California-Santa Barbara conducted a study on more than 16,000 women that looked at their waist-to-hip ratios, educations and intelligence scores on various cognitive tests. Why? Because they were trying to determine if there was a correlation between curves and intelligence, obviously. They found that women who were curvier (specifically, waists that were 70 percent of the diameter of their hips) were slightly smarter. Scientists were intrigued by the findings but said the results were too slight to warrant any little-in-the-middle-but-she-got-much-back-and-brains parades (to paraphrase their skepticism). To play devil’s advocate for a moment, Shakira is literally a genius — she has an IQ of 140, according to Mensa International Reports. So perhaps her hips don’t lie, actually.

Researchers at the University of Rochester NY conducted the pressing study on how much a man would be willing to spend on a woman based on the color she was wearing. In one experiment, researchers asked: “Imagine that you are going on a date with this woman and have $100 in your wallet. How much would you be willing to spend on your date?” Men were then shown pictures of the exact same women wearing different colors. The woman in red was more likely to get a fancier date, it turned out (you win again, Jessica Rabbit!). Not only were the red-strewn ladies not going to dates at the Sizzler, men also rated women “framed by red” as significantly more attractive and desirable than those in other prudey colors. Scientists postulated that the color trigger had something to do with a throwback to our primate ancestors’ mating habits, and how female posteriors turned red when they were in heat. But we think maybe the men were fondly recalling memories of Grandma’s backyard red lawn furniture.

7. You can bring a corpse to orgasm.

Another Mary Roach gem, found in her book Stiff on human cadavers (and in her TED talk), is the study that found out if you stimulate the sacral nerve root of a beating-heart cadaver with an electrode, it triggers the Lazarus reflex, which is a movement in which the legally dead person will cross its arms across its chest. “Very unsettling for people working in pathology labs,” as Roach put it. Roach surmised that if a corpse can be stimulated to do the Lazarus, it could also be stimulated to orgasm. So she asked brain death expert Stephanie Mann:  “Could you conceivably trigger an orgasm in a dead person?" She said, ‘Yes, if the sacral nerve is being oxygenated, you conceivably could.’ Obviously it wouldn't be as much fun for the person. But it would be an orgasm — nonetheless.” So not only can researchers make corpses do part of the macarena, they can also give dead people the time of their lives (deaths?).