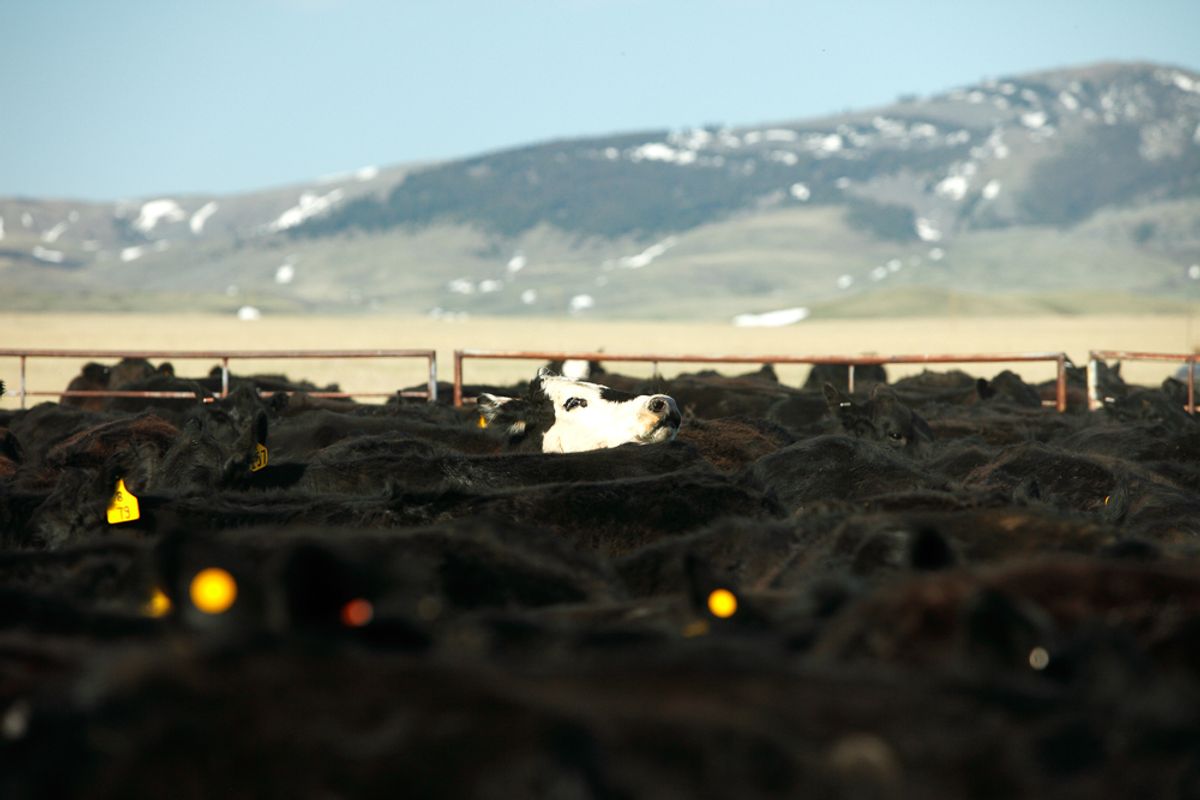 How do antibiotic-resistant superbugs spread from factory farms to the human community, where they contribute to our escalating public health crisis? They can hitch a ride on meat, according to the CDC, or enter the environment through contaminated water or fertilizer.

Or, a new study demonstrates, they can travel through the air, carried by dust in the wind.

Texas Tech researchers collected and measured particulate matter blown from ten commercial feedlots in Lubbock, Texas, and found that when the wind is blowing in the right (or, wrong) direction, the air is rife with fecal bacteria, antibiotics and the DNA of antibiotic-resistant bacteria.

"The 'aha' moment came when we saw how much more prevalent resistant sequences were downwind than upwind," Greg Mayer, a molecular biologist and one of the study's authors, told the Texas Tribune. "It was not just higher in some of them – it was 4,000 percent more."

He added: "It made me not want to breathe."

Like the superbug DNA, this study has been circulating since late January, when it was first published online. It's slated to be published next month in the journal Environmental Health Perspectives. And it's worth paying attention to because its findings, while preliminary, provide yet another reason why we should be taking factory farm abuse of antibiotics a lot more seriously than we are.

The authors say their research is proof that bacteria can indeed travel by air: another mechanism by which resistance travels beyond factory farms. “What we have demonstrated is that this mechanism of transport is completely viable," study co-author Phil Smith, an environmental toxicologist, explained. “We believe that this bacteria could remain active for a long period of time and, given the wind that we have around Lubbock, it could be traveling for long distances."

Still unanswered is the question of what this might mean for the superbug crisis. The authors are concerned that bacteria laden dust may spread resistance to the places it settles -- while many of the antibiotics used on factory farms aren't important to human medicine, they note that once they're floating around out there, resistant genes can be transferred to bacteria that does threaten human health.

An estimated 80 percent of all antibiotics sold in the United States are used in agriculture, and researchers say the drugs' exploitation by the meat industry is expected to surge, globally, over the next 15 years. Antibiotic-resistant bacteria, meanwhile, kill about 23,000 Americans each year; infectious disease specialists warn that the rise of resistance is as grave a threat as that of climate change. And yet while the White House, last week, announced an ambitious new plan to tackle resistance, it failed to address this component of the problem.