“We need to stop counting the bruises”: On the NFL, Indiana's RFRA & what violence really looks like

How bad does it have to get before we are compelled to act? We can look to the NFL and Indiana to find out 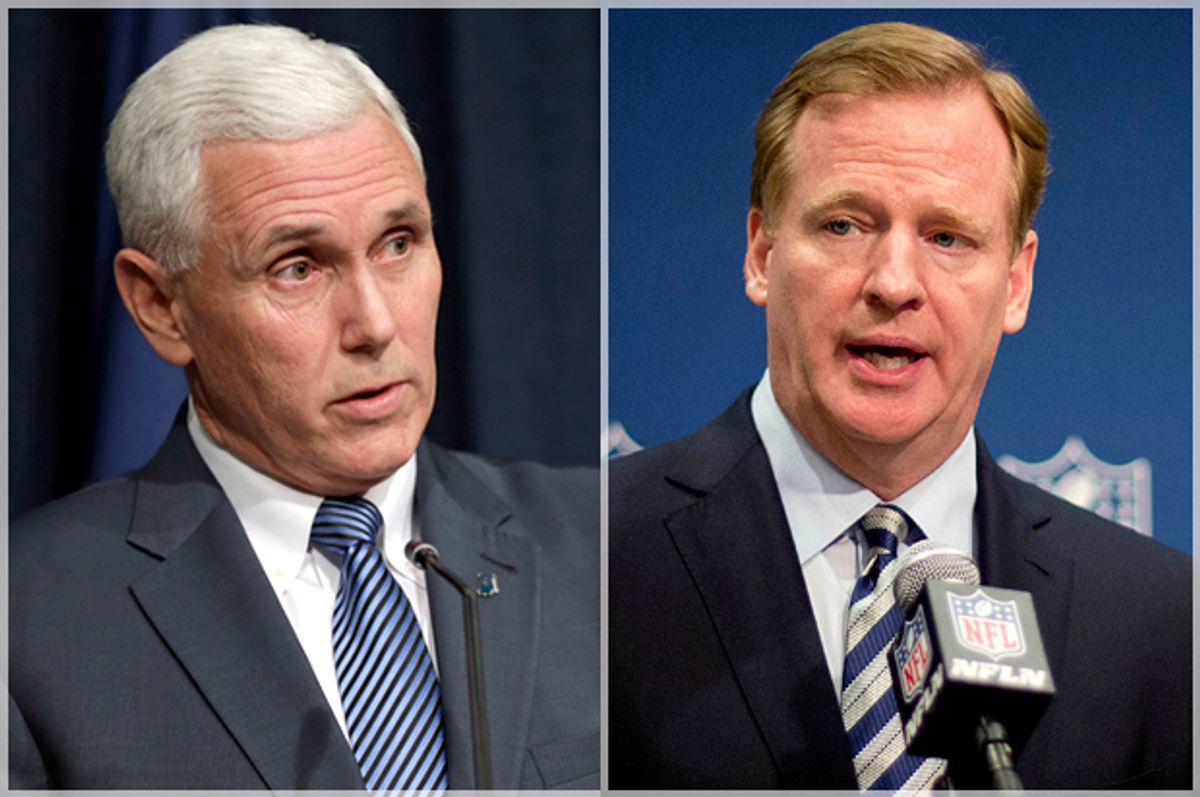 The NFL is still trying to figure out how it will discipline Cowboys defensive end Greg Hardy, who last year was found guilty of assault and communicating threats but had the charges dismissed on appeal. Hardy appealed the conviction and was assigned a jury trial, but it was called off after the alleged victim did not show up to testify, reportedly because she reached a civil settlement with Hardy.

Now the league has requested access to photos of the woman’s injuries to inform any disciplinary actions it might take. This shouldn’t surprise anyone who has been paying attention to the NFL’s record on abusive players.

The NFL is covering its ass. The league is asking, as Tom Ley argued at Deadspin, “How bad will we look if these pictures become public without us seeing them, and our punishment is deemed to have been too light?”

The league is figuring out how much it can minimize and overlook Hardy’s abuse without giving the appearance of being indifferent to it. How to keep him on the field while also reassuring critics that it cares about violence against women. Because the NFL isn’t sure if violence is really all that bad until they can see it in its gory detail. No other evidence will suffice.

That’s most of us, actually. We don’t like to acknowledge the prevalence of abuse (or the kind of abuse that doesn’t leave a mark), so we, as Ley also said, count bruises and calculate our condemnations accordingly. Did he just say he was going to kill her or did he really try? Did he shove her or did he hit her?

And even when we can see brutality, we still usually look away. This is also our tendency when it comes to the violence of our state and institutions. What else could explain the upheaval Indiana caused with its expanded version of the Religious Freedom Restoration Act. Discrimination against LGBTQ people in Indiana, and much of the rest of the country, is already legal. It's been legal.

In response to the Indiana law, corporations like Apple and politicians like Pence counted the bruises -- a restaurant owner who said he had turned away gay customers, a pizza place that said it wouldn’t cater a gay couple’s wedding, a public that quickly turned against such a blatant expression of bigotry -- and responded accordingly. Image control.

The NFL and commissioner Roger Goodell are doing the same thing. Like Ray Rice before him, there is no real question about what Greg Hardy did. The NFL has in its hands a guilty verdict in which a court stated that it was “entirely convinced” that Hardy had assaulted a woman. We also have the testimony of Nicole Holder, Hardy’s alleged victim.

Last year, she told a court that Hardy put his hands around her throat:

He looked me in my eyes and he told me he was going to kill me. I was so scared I wanted to die. When he loosened his grip slightly, I said just, “Do it. Kill me."

She recounted his history of threats:

He had told me in past if I took food out of his family's mouth he was going to kill me.

Another woman who was in Hardy’s apartment at the time of the alleged assault testified that she heard what sounded like a woman being slammed into a wall and dragged across the floor. She said she heard Holder say, “What are you going to do, break my arm?"

So what will the photos show the NFL? Is there a certain number of red marks that will translate into days on the bench or paychecks lost? Is that how the league makes violence “unacceptable”? And what will happen next in Indiana? If its RFRA is amended in the manner that has been proposed, does that really change much about the precariousness of LGBTQ people's rights in that state and across the country?

Anything that instigates action or a response from an otherwise indifferent public or system is a good thing, there's no doubting that. But the fact that any response is better than no response does not mean that it’s enough.

We know the statistics on intimate partner violence, we have the data on violence and daily discrimination against LGBTQ communities. We have heard the stories of people who have survived and mourned those who did not.

We know the numbers so well at this point that it feels rote to list them; 1 in 4 women will be assaulted by a partner at some point in their lives. Intimate partner violence is the most common cause of injury among women ages 18 to 44. It literally makes women sick. It is expensive. It costs women their jobs. It is psychologically damaging. It is related to other forms of violence, like mass shootings. It is lethal.

Transgender women accounted for more than 70 percent of the anti-LGBTQ homicides in 2013, and 89 percent of those victims were women of color. LGBTQ youth are disproportionately represented among the homeless population in this country. Anti-LGBTQ discrimination causes joblessness and poverty and the general miseries of being treated like you are less than by your neighbors and elected officials.

These are the daily and largely invisible marks of violence, and they are at this point familiar. It's time to stop counting the bruises.