America's "Menendez" problem: How big money poisons politics -- and how it can be fixed

While the senator is innocent until proven guilty, we can already draw some important lessons from his indictment 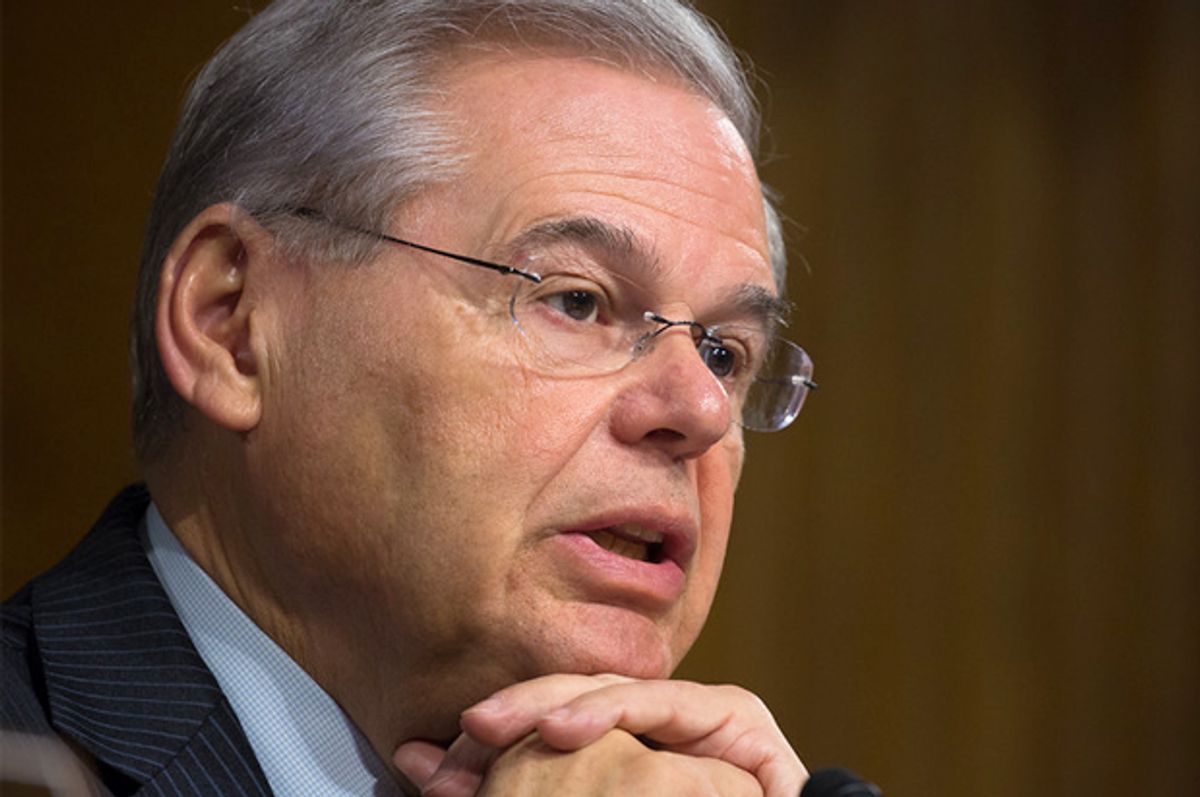 Call it senatorial serendipity. Senator Robert Menendez’s indictment yesterday, including allegations of official favors for political contributions, came down one day before the first anniversary of the Supreme Court’s decision in McCutcheon v. FEC. That case blew the lids off of overall “aggregate” contribution limits.

While Sen. Menendez is entitled to the presumption of innocence, the New Jersey Democrat's indictment paints a picture of how easy it is to appear corrupt in a system so awash in cash.

One year ago today, five justices declared unconstitutional the longstanding, overall limit any single donor could contribute to federal campaigns in a single election cycle. (The total did not count donations to Super PACs, which can accept unlimited contributions).

McCutcheon, decided four years after Citizens United, was another disastrous step toward a politics dominated by the very rich and the very connected. With no overall contribution limit, candidates could form “joint fundraising committees” with political parties and other office-seekers, soliciting checks well into the seven-figures and split among the participants. In some cases, the money could be funneled and spent to support the candidate who solicited it.

Chief Justice John Roberts dismissed this concern as “divorced from reality,” claiming that laws already on the books prevented any quid pro quo corruption. Besides, he wrote, the ingratiation and access that campaign donors expect in return for their support of political candidates are a “central feature of democracy.”

The Menendez indictment suggests the Department of Justice has a different view. But it didn’t take long for some in Congress to get the Chief’s message.

In late 2014, during the chaotic wheeling and dealing over the $1.1 trillion so-called “Cromnibus” government spending bill, Congress voted to vastly increase the amount of money that a single donor can donate to political party committees. Reportedlyat the behest of election lawyers, drafters slipped the contribution limit increase into the must-pass bill at the last minute, without any hearing or warning.

As the nonpartisan Congressional Research Service reported in March, the new provision allows donors to contribute over $1.6 million to political parties in a single two-year election cycle. That’s a 2,000% increase from the limit at this time last year, when the maximum a single donor could give to federal political party committees was $74,600.

But for McCutcheon, Congress couldn't have passed it. Shaun McCutcheon, the Alabama businessman who brought the case with the Republican National Committee, claimed he simply wanted to support more candidates without bumping up against the aggregate contribution limit.

Of course, Mr. McCutcheon was free to support as many candidates as he wished, although he could only vote for those in his home state. But the law put a cap on his total giving to guard against corruption and its appearance. It was grounded in the reality, now backed up by the Menendez allegations, that too much money in the system risks producing a government more responsive to donors than voters.

When does responsiveness become corruption? While there is no panacea for what the Court did in McCutcheon and earlier in Citizens United, there are proven solutions on the table. Repealing the Cromnibus provision would be just a start.

Congress could follow the lead of states like Connecticut and Maine and enact a public financing system that would allow candidates to run competitive elections with small donations from their constituents matched by public funds. Voluntary public financing shifts power to rank-and-file constituents and away from big donors and special interests. Two bills in Congress – the Government By the People Act and the Empowering Citizens Act – would install these sorts of systems.

Second, Congress could rein-in single-candidate Super PACs and others that exist as nothing more than vehicles for candidates to accept unlimited contributions from anyone (or any corporation) willing to cut a check. The Stop Super PAC-Candidate Coordination Act, introduced in the House, would shut these down because they’re not truly independent.

Third, Congress could enact better disclosure laws. Since Citizens United, the donors behind over $500 million spent influencing elections have been hidden from public view. Voters have a right to know who is speaking to them in political ads, and to whom their elected officials are beholden. The DISCLOSE Act would go a long way toward achieving this goal.

President Obama could use his independent authority to sign an executive order requiring government contractors to disclose their political spending. The Securities and Exchange Commission could heed the call of over one million commenters and promulgate rules requiring public companies to disclose political spending to their shareholders. The Internal Revenue Service could enforce the law against political consultants who set up sham “social welfare” non-profit organizations to disguise political spending and grant major donors anonymity. And the Federal Election Commission could enforce the law.

Americans have to vote in numbers large enough to make their power felt and their voices heard. We don’t have to accept a rigged game.

Stephen Spaulding is the policy counsel for Common Cause.