"Payback" against Bob Menendez? Why the right's theory doesn't hold up

These Chicago thugs will do anything! 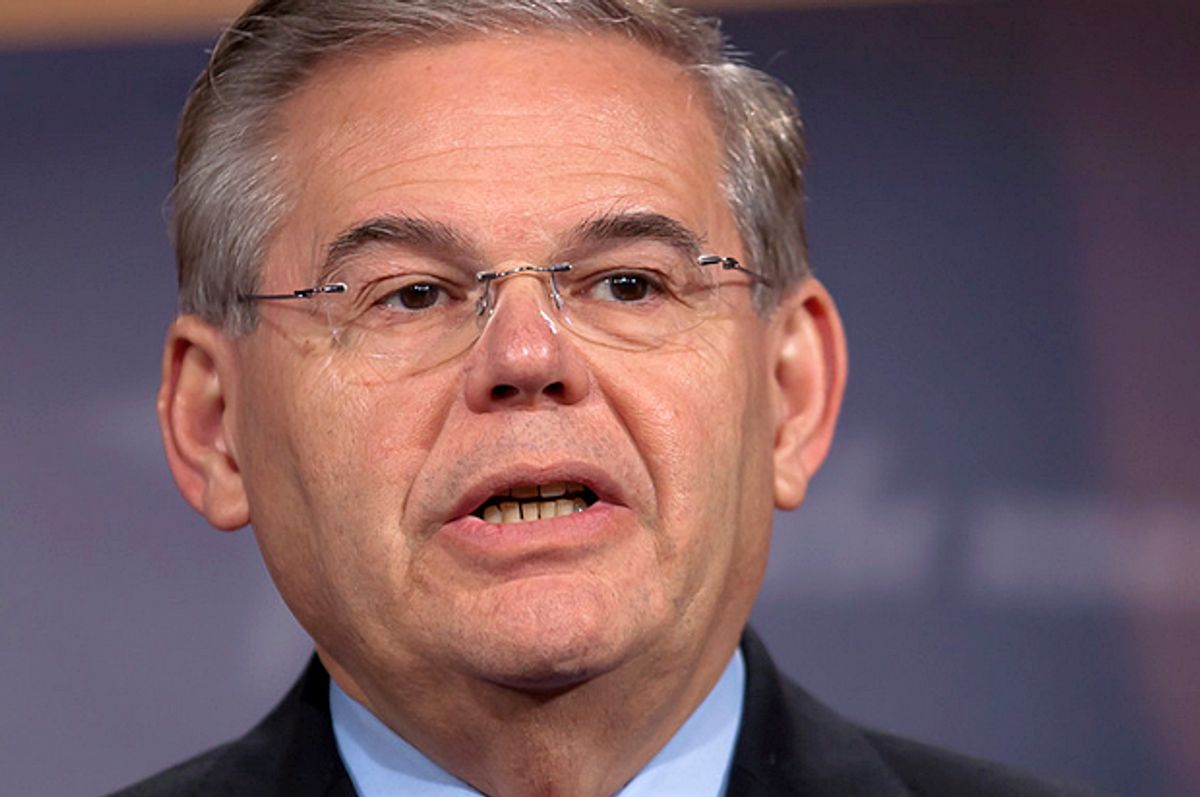 The Obama administration's most prominent foreign policy critic from within his own party, New Jersey Sen. Bob Menendez, was indicted on 14 corruption charges. This will encourage the chatter that began weeks ago, when Menendez's indictment was reported as imminent, that this is political payback from the Obama administration for Menendez taking a hard line against negotiations with Iran.

There is no way to definitively disprove this theory, which, as my colleague Simon Maloy has explained, will make it so appealing to the administration's critics. It's the sort of thing that Matt Drudge was born to spread through indiscreetly catty aggregation.

Let's consider a couple of reasons, however, for why this doesn't add up.

The most obvious is that the Justice Department has been building this case for several years. It did not launch an investigation into Menendez's improper relationship with a friend/donor a couple of months ago after Obama and Menendez traded sharp words at a Senate Democratic retreat. Moreover, the relationship between Menendez and his friend/donor was pushed by some (very imperfect) reporting in conservative media around the time of Menendez's 2012 reelection campaign. Had the Justice Department not pursued it, we might be hearing from the same people about how the politicized administration was protecting a Democrat who is allied with the administration on most non-Iran-or-Cuba issues. Bob Menendez's Senate career has been threatened by corruption allegations since the day Bob Menendez walked into the Senate.

But what about the timing? When the Senate gets back, the plan is to vote on two bills co-authored by Menendez that could derail negotiations with Iran. One, cosponsored with Senate Foreign Relations Committee chair Sen. Bob Corker, would require a congressional review period for any deal reached between Iran and P5+1 negotiators. The other, co-authored with the Sen. Mark Kirk, would dangle a new wave of sanctions over Iran's head. President Obama has pledged to veto both bills, as they come at a very delicate time. In both cases, though, Congress may have the two-thirds majority needed to override the president's veto.

Does Menendez's indictment, and him stepping down temporarily from his position as ranking member on the Senate Foreign Relations Committee, threaten both of those bills? The early word is "maybe."

The Hill has a piece about how the Menendez charges "put Iran legislation in doubt." It has some useful information about who'll succeed Menendez as the Dems' Foreign Relations ranking member. Next in line is Sen. Barbara Boxer (not an Iran hawk), but she's already a ranking member for another committee, so after her it would be Sen. Ben Cardin (Iran hawk, though not quite as outspokenly as Menendez). Beyond that, though, it doesn't explain how Bob Menendez facing federal corruption charges could cost a dozen or so Senate Democratic votes for either two bills.

"The Foreign Relations Committee is set to vote April 14 on the bill he co-authored with Corker calling for Senate review of an Iran deal," The Hill writes. "If Menendez is out of the picture long-term, it could sap Democratic support for legislation that the White House has already threatened to veto." The Senate Democrats whose votes are in play still haven't changed their minds after plenty of lobbying from the White House urging them to stand down. How is Bob Menendez facing charges going to change any of that, since these bills will still come up for a vote? If intense White House lobbying wasn't going to be enough, why would Bob Menendez's cooties get the job done?

The Senate is prepared to vote on these bills, and if Senate Democrats are going to back away from them, it won't be because they're scared of associating themselves with Bob Menendez. (Most Democratic senators have issued statements in the past 24 hours praising Menendez and saying that he should be treated as innocent until proven guilty.) If Democrats do back down on these bills, it's going to be because the Obama administration somehow gets through to them to let negotiations play out without congressional interference.

Bob Menendez will be prosecuted for corruption because there is solid corruption case against him that's been in the work for years, and there's no evidence that the chances of either of these two bills reaching a veto-proof majority are any worse than they were a couple of days ago.