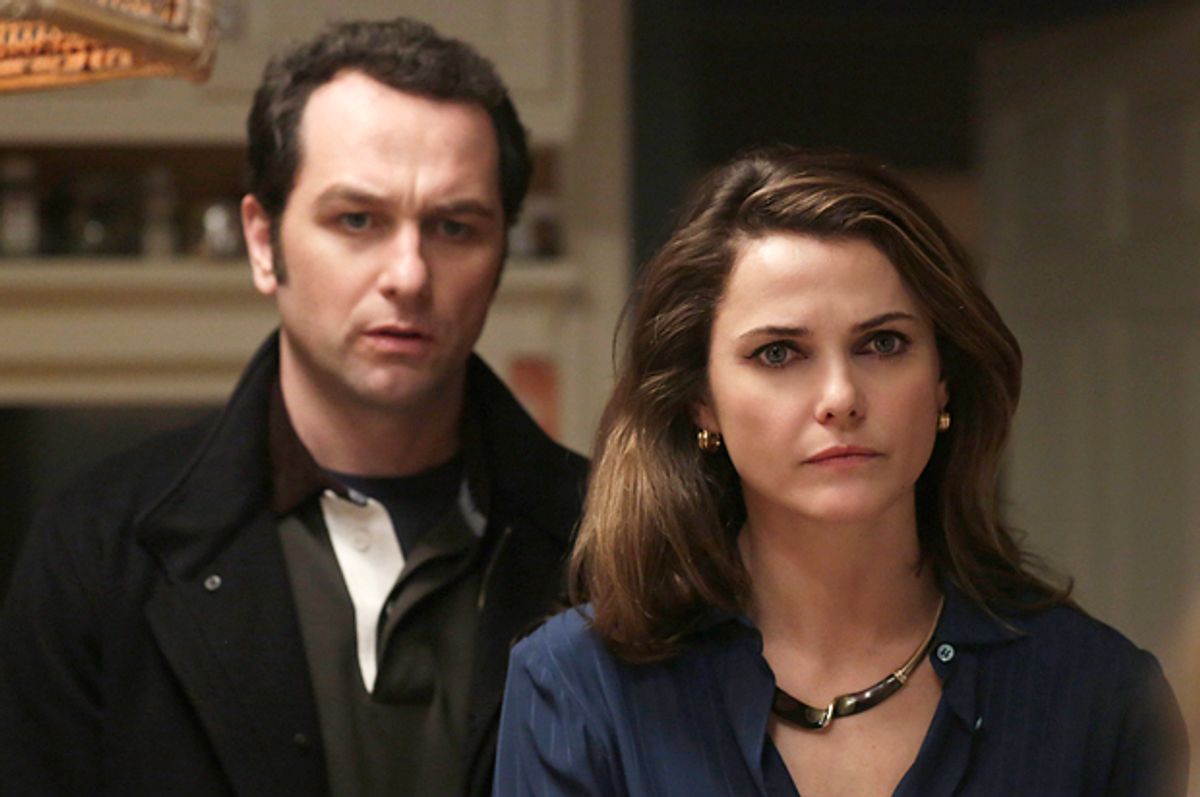 Matthew Rhys and Keri Russell in "The Americans" (FX/Patrick Harbon)
--

Last night on “The Americans,” Philip and Elizabeth Jennings finally came clean to their daughter Paige about their hidden life as Soviet spies. This is a show that has always tested viewers emotionally, and this long-awaited moment was exactly the gut-punch we were anticipating: From Paige’s discovery that her whole life has been a lie, to the heartbreaking realization about what will happen to her parents should she reveal their secret, and the terrible burden and isolation she faces going forward.

Here are some of the scenes that have tested our limits in other ways this season:

Physically (“Baggage” and “Open House”)
“The Americans” has always placed a lot of emphasis on the body, both in the use of wigs and disguises and the primacy on sexual manipulation and physical violence. But this season in particular has given us some of the more intense images of bodily pain in the show’s run: namely, Philip pulling Elizabeth’s tooth in "Open House," and the couple breaking down and folding up Annelise's corpse and putting it in a suitcase in "Baggage."

Both scenes were among the more graphic scenes of physical mutilation we’ve seen on TV (the Observer dubbed the suitcase scene “the grossest scene of 2015” while Slate called the tooth-pulling "one of the most harrowing scenes in television history"). Indeed, the soundtrack to the suitcase scene alone — with Philip and Elizabeth cracking and snapping Annelise's limbs like the wings off a chicken — is the sort punishing, visceral filmmaking that makes viewers’ bones throb in sympathetic anguish. In both cases, too, the scenes were intentionally laborious and slow — two-and-a-half minutes with the tooth and a minute breaking down Annelise's body — which made clear the grueling effort and labor our protagonists underwent.

Yet “The Americans” rarely engages in violence for its own sake, and both scenes served important roles in helping us understand our complex lead characters. The tooth-pulling scene was, at its, essence, a remarkable portrayal intimacy and trust — “our sex scene for this episode,” as Keri Russell put it — while the suitcase scene served to distance us from our protagonists and remind us of the fundamental brutality and stone-cold ruthlessness that underpins everything they do. The fact that two equally violent scenes can be used for such different emotional effect in back to back episodes is remarkable, and shows why the Americans is batting at a different average than most of its fellow shows.

Sexually (“Salang Pass”)
“The Americans” isn’t gratuitous with its sex scenes, but it often provides memorable moments — like season two’s famous 69-ing scene, or the scene where Elizabeth demands that Philip have sex with her “as Clark”— and this season's sexual narrative has tested viewers in other ways. “Salang Pass” was an episode that forced us to confront the ugly consequences of our characters’ weaponized sexuality; first, in Philip’s seduction of fifteen-year-old Kimmy, which is one of the most disturbing things we’ve seen our characters for Mother Russia, made especially agonizing by the character’s evident discomfort, and the parallels with the relationship between Philip and his daughter. The most we have been forced to endure so far between Kimmy and Philip was a kiss, but the show brought viewers to the limits of where we could tolerate, always threatening us with more (as the New York Times put it, summing up what we've all been thinking: "Is he going to be able to avoid sex with this child?")

Yet as with the Americans, there are always layers to things. At the end of the episode, we get a flashback to Philip’s KGB training, which shows him being trained to use sex for his operations, to offer himself to anonymous women and men in dreary rooms, and it is devastating. By juxtaposing these scenes and the Kimmy scenes, we understand Philip better than ever: the true rigors of life as a spy, the complete loss of personal and sexual autonomy and the intense psychological weight he is forced to bear. As James Poniewozik writes in Time, the whole experience has "utterly drained Philip, who walks through the episode like a zombie, aching at the faint memory of authentic life." What other show puts their main characters through this much?

Emotionally and morally (“Do Mail Robots Dream of Electric Sheep?”)
Every episode is an emotional journey, but perhaps none more so than Elizabeth's slow murder of Betty, an old lady unfortunate enough to cross her path while she was doing a job undisguised. There’s so much going on here on an emotional level here: Elizabeth’s pain over what she has to do; her vulnerability as she reveals her true name and origins; the wider context of two women caught in the endless cycle of 21st century war; and this familiar stranger comforting her and occupying a surrogate mother position, before, in her dying breaths, refusing to accept Elizabeth's justification for her atrocities. As Betty puts it, "That's what evil people tell themselves when they do evil things.” Perhaps more than any scene so far, it lays bare the lie of Elizabeth's cause, and the terrible emotional weight our heroine must suffer. It's one of this season's slowest scenes, and its most wrenching -- Keri Russell at her absolute best.

Throughout the season we, more than ever, have been forced to grapple with the shaky morality of our protagonists. The seduction of Kimmy, the cultivation of Paige, the murder of Betty, the betrayal of Martha — each week, we face a mounting tally of personal atrocities that Phillip and Elizabeth are forced to commit in the name of their cause. At the same time, as the wider political world intrudes — particularly this season's South African Apartheid narrative -- we sympathize with their aims and their commitment to justice in a world gone askew. There's no easy answers, and as Paige joins the fold — and our heroes are caught between protecting their daughter, serving their country and saving themselves -- it’s only going to get tougher. We cant wait.