14 and trying to get pregnant: "Shameless" paints a bleak portrait of the sex lives of girls 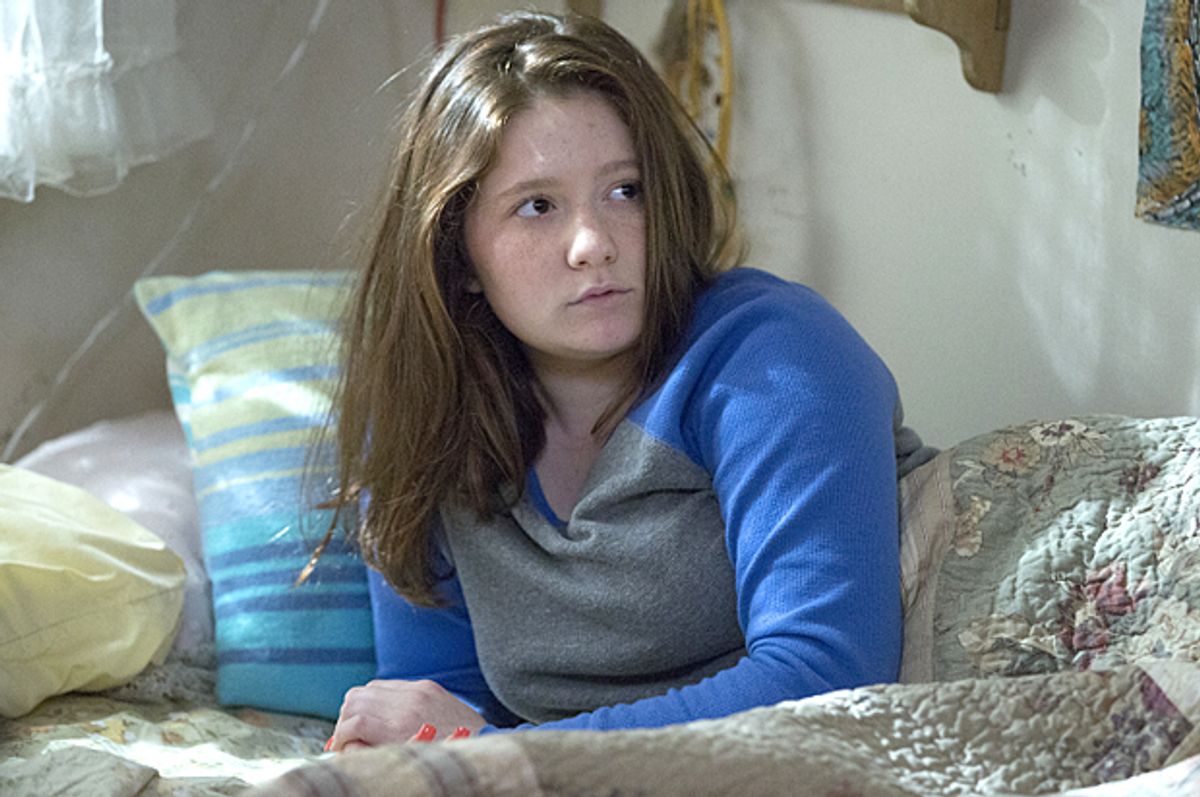 Two weeks ago, in the “Shameless” episode “South Side Rules,” 14-year-old Debbie Gallagher decides to have sex with her boyfriend for the first time. At first blush, her decision seems accelerated, but not unreasonable: “Shameless” follows a bunch of working-class kids who basically have to raise themselves, so Debbie’s both somewhat unsupervised and more mature than she ought to be. Plus, as the show has spent five seasons building up Debbie’s character ( played by the preternaturally talented Emma Kenney), we know that’s she’s smart and aware and has perspective well beyond her years.

Case in point: In “South Side Rules,” Debbie asks her older sister (and surrogate mother) Fiona to take her to a doctor so she can get a prescription for the pill. As Fiona stuffs condoms into her pockets, the doctor says to Debbie: If you’re going to have sex in the next 48 hours, use a condom, because the pill isn’t going to be effective yet. We see our girl Debs listen and nod. This is a character who has been responsible for babysitting bipolar relatives; she knows how to keep track of medication. She nods, very seriously.

Cut to: Debbie draws Derek onto her bed for what is going to be her second sexual experience of all time, the night of her appointment. And when he fumbles for a condom, she says: “Don’t worry, I’m on the pill.” It’s crystal clear to the viewer, even as Derek is blissfully ignorant: Debbie knows she’s at risk of getting pregnant, but she’s taking the risk anyway. Why she’s taking it, meanwhile, is left unclear.

“Shameless” is not a show that always explains its most bizarre plot twists, but that’s part of the show’s built-in mood: The Showtime drama follows a poverty-line family wracked by alcoholism, untreated mental illness and crumbling public institutions. Parents Monica and Frank more or less abandoned the children to fend for themselves well before the show even started, five years ago. The six Gallagher kids have each other and their close-knit community, but when the odds are stacked against them this hard, it’s no wonder that they get rash, angry, impulsive or desperate. The past five years of the show has seen the characters dig up a body, run over romantic rivals with a car, take a stand in an epic bar brawl, steal furniture out of foster parents’ houses, run a brothel, deal heroin, snort coke and run headlong into affairs with married people. By the end of the fifth season, three of the six Gallagher kids have been incarcerated—and that’s at least in part because Liam, the youngest, is still going to daycare. The titular shamelessness of the characters is writ in how little dignity they have left to save.

But despite her family’s dysfunction, Debbie, up until now, has been a responsible, rule-following kid. In the early seasons of the show, she was the family’s heart—where oldest kids Fiona and Lip had to be tough early on, middle kids Ian and Debbie had a chance to go through some kind of regular adolescence. Debbie—or as her family calls her, Debs—attends school regularly, cares about her family, and babysits in the neighborhood. She’s dependable and trustworthy. Or at least, she was.

The only hint to her reasoning, so far, is a little earlier in the episode, when one of Derek’s relatives is helping Debbie apply stick-on, dagger-point, pink-orange artificial fingernails. Both girls treat the act as a kind of rite of passage—maybe along the lines with shaving your legs for the first time, or piercing your ears. Debbie practices picking coins up off the table with her long nails. And meanwhile, Derek’s relative tells her about how much her son, who she had as a teenager, means to her now.

The “Shameless”’ finale this upcoming Sunday is one of its worst yet. The show has gained a reputation for stunning penultimate episodes followed by anticlimactic, muddled finales, but even by that standard, “Love Songs (In The Key Of Gallagher)” is frustratingly inconclusive—except when it comes to Debbie. She’s the only character who seems to have a coherent arc, and weirdly, it’s the arc of duplicitous sexual misadventure. The first half of the season portrayed Debbie’s first sexual experience—a situation where she raped her partner, although she genuinely believed he was into it because he had an erection. (Debbie, at 14, is a bit young to have gotten the “if they’re blackout drunk, they can’t consent” lecture that so many universities deliver nowadays.)

Indeed: Debbie Gallagher has become a young, earnest version of a parent’s worst nightmare—the woman who rapes men; the woman who seduces men in order to (attempt to) get pregnant. (This also describes a men’s-rights-activist’s worst nightmare.) It’s irresponsible, it’s selfish, and it’s flat dangerous—pregnancy is no picnic, and unprotected sex has more possible consequences than just babies.

But as I wrote before, the audience also knows Debbie. Debbie’s not malicious. She hasn’t been self-destructive up till now. And even when she’s making decisions that make the audience want to reach through the screen and shake her by the shoulders, the writers offer up bits and pieces of her perspective. You can sort of see her logic about motherhood. In her neighborhood, teens have babies all the time. Debbie herself has been raising babies since she was a baby—on little to no money, to boot.

One of the persistent tics of “Shameless”—borne out of either a very depressing realism or an unspoken agenda on the part of the show’s writers—is that its women have a lot of trouble making it out of the neighborhood. Fiona, a brilliant, charming human being, is said to be not book-smart enough for college; she throws herself into blue-collar work after a failed attempt at a desk job. Lip, her younger brother, ends up getting into MIT. Ian, after him, joins the military. Fiona hasn’t even managed to move out of the house she grew up in. Debbie’s always been portrayed as sensitive and domestic—such that the rest of the family is fiercely protective of her. But it’s also possible to imagine that Debbie ended up as sensitive and domestic because that might be all she could see herself being. Her unhinged younger brother Carl has banal adolescent dreams of rolling in money and banging bitches. Debbie doesn’t seem to dream of anything at all.

This bleakness comes out strongest in the story around Mandy Milkovich (Emma Greenwell), a girl in the neighborhood with an even more dire family situation than the Gallaghers. Her father sexually abused her as a kid, and still terrorizes her and her brother Mickey intermittently (he forced Mickey to marry a woman, even though Mickey is gay). Mandy fell in love with Lip, and was so dedicated to him that she both ran over her romantic rival with a car and filled out his college applications for him. Once he got into college, Mandy pushed him away, to the point that she wouldn’t even speak to him in front of his well-dressed college friends. She wanted him to get as far away from the hood as possible, and that meant getting as far away from her as possible.

It’s an awful, gut-wrenching self-loathing that came to a head this season, when Mandy said goodbye. She fell in with a guy named Kenyatta that wasn’t averse to roughing her up in an argument. And even though she didn’t really love him, when he asked her to move to Indiana with her, she did it. Lip tries to talk her out of it, but the hopelessness is writ large on her face. What else is there for me? And he doesn’t have a good answer for her, because maybe there isn’t a very good one.

Now Debbie is entering that same crucial age—her teen years, where she’s figuring out what she wants out of her sex life. Is it really a surprise that she’s alighted on pregnancy? Yes, there’s a rebellion she’s acting out, against Fiona, specifically. But she’s also got a pretty good handle on what she, as a 14-year-old girl in a poverty-stricken neighborhood, is worth to the world. Her sex life up until now has been defined by terror that no one finds her attractive. For her, ditching contraception in that crucial moment is a twisted expression of love—and an act borne of fear, too. Debbie is absolutely terrified of losing the one guy she’s ever met who has made her feel beautiful. So she took a terrible risk.

It’s not a cheerful story. But it is, unfortunately, recognizable.