Man reported missing at sea for 66 days reunites with family 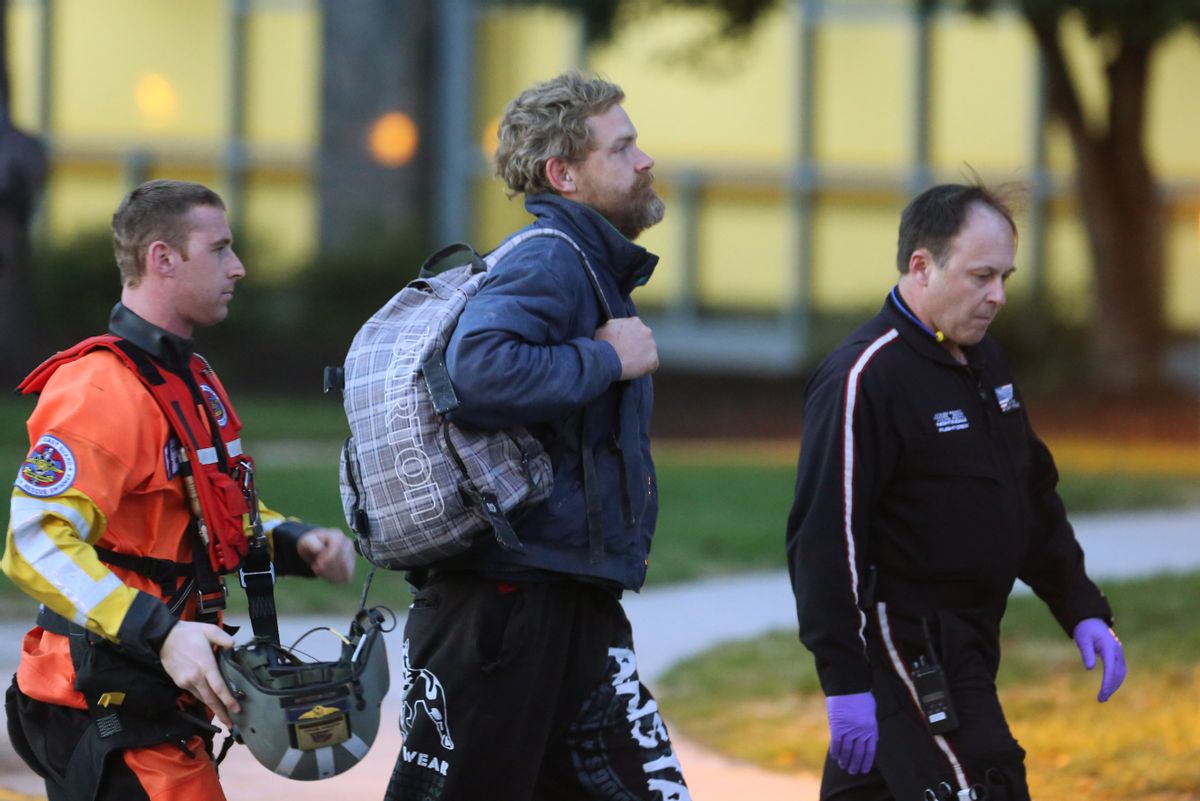 Louis Jordan, center, walks from the Coast Guard helicopter to the Sentara Norfolk General Hospital in Norfolk, Va., after being found off the North Carolina coast, Thursday, April 2, 2015. His family says he sailed out of a marina in Conway, S.C., on Jan. 23, and hadn't been heard from since. (AP Photo/The Virginian-Pilot, Steve Earley) (AP)
--

CHARLOTTE, N.C. (AP) — A man whose family says he was missing at sea for more than two months is back on dry land and reuniting with his family.

The crew of a German-flagged container ship found Louis Jordan floating Thursday afternoon on the overturned hull of his 35-foot sailboat, about 200 miles off the coast of Cape Hatteras.

A Coast Guard helicopter crew from North Carolina airlifted Jordan from the tanker to a hospital in Norfolk, Virginia, on Thursday night, where he was recovering from a shoulder injury and dehydration.

Jordan, 37, had been living on his sailboat at a marina in Conway, South Carolina, until January, when he told his family he was "going into the open water to sail and do some fishing," said his mother, Norma Davis. He sailed out of the marina on Jan. 23, Coast Guard officials said, and had not been heard from him since.

The details of Jordan's whereabouts since January and how he might have survived for more than two months at sea were still unclear, said Coast Guard Chief Petty Officer Ryan Doss.

"We don't know where he capsized," Doss said. "We really won't know what happened to him out there until we talk to him" at length.

Ross said Jordan did say that he had eaten fish that he caught.

Records show that Jordan sailed out of the marina in Conway, on Jan. 23, aboard the sailboat Angel, said Marilyn Fajardo, a spokeswoman for the Coast Guard's 7th District. Fajardo said the Coast Guard in Miami was notified by his father, Frank Jordan, on Jan. 29 that he hadn't seen or heard from his son in a week. One week later, Davis said their son was still missing.

Fajardo said alerts were issued from New Jersey to Miami to be on the lookout for Jordan and his sailboat. Officials also searched financial data to determine whether Jordan actually had come ashore without being noticed, but found no indication that he had, she said.

A search was begun on Feb. 8, but Fajardo said the Coast Guard abandoned its efforts after 10 days. Despite reports from other sailors claiming to have seen Jordan's sailboat, none of the sightings were confirmed and the case was suspended. The Coast Guard said Jordan didn't file a "float plan," the nautical equivalent of a flight plan, to determine his route or destination, and Fajardo said there wasn't enough information to narrow down his whereabouts.

"We're elated that he survived. We were never able to determine where he was headed," Doss said. "Without that as part of the equation, it was difficult to come up with a search area."