The Guardian's radical attack plan: How the newspaper is taking sides in the Climate Wars

The British newspaper isn't just ignoring climate deniers. Now it's hitting Big Oil where it hurts. But should it? 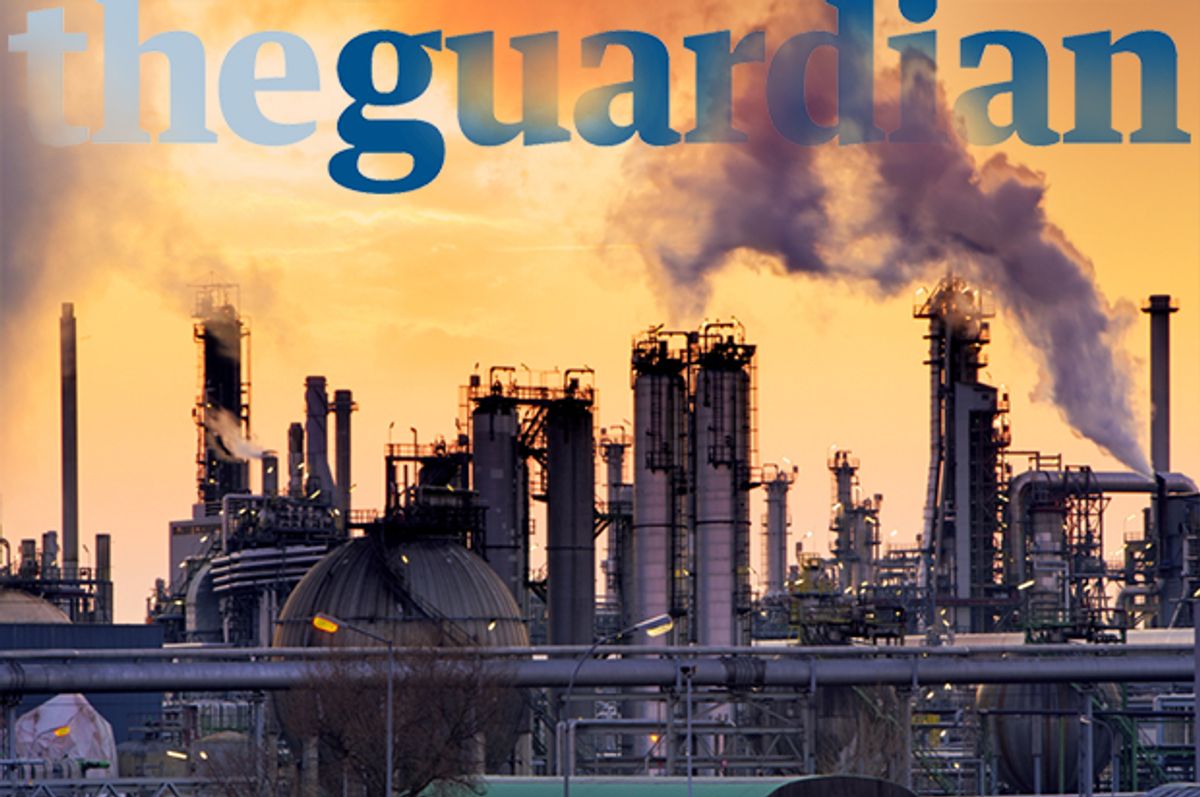 While much of the media spends its time wrangling over the proper amount of attention they should be paying to the arguments of climate deniers and the energy companies polluting our atmosphere, British newspaper the Guardian has gone ahead and embraced a policy of unapologetic climate activism.

Last March, departing editor Alan Rusbridger kicked off a six-month effort to enhance the British newspaper's climate change coverage and also to campaign for divestment, an editorial decision, he explained, that attempts to do "justice to this huge, overshadowing, overwhelming issue of how climate change will probably, within the lifetime of our children, cause untold havoc and stress to our species."

Here's what paying full heed to the climate change story at the Guardian will look like, as outlined by Rusbridger at the beginning of March:

For the purposes of our coming coverage, we will assume that the scientific consensus about man-made climate change and its likely effects is overwhelming. We will leave the skeptics and deniers to waste their time challenging the science. The mainstream argument has moved on to the politics and economics.

...We will look at who is getting the subsidies and who is doing the lobbying. We will name the worst polluters and find out who still funds them. We will urge enlightened trusts, investment specialists, universities, pension funds and businesses to take their money away from the companies posing the biggest risk to us. And, because people are rightly bound to ask, we will report on how the Guardian Media Group itself is getting to grips with the issues.

That last point it addressed this week, when the Guardian Media Group announced it would put its money where its mouth is and divest its £800 million ($1.18 billion) fund from all coal, oil and gas companies -- a "hard-nosed business decision," explained GMG chair Neil Berkett, that is "influenced by the values of our organization."

Such an unqualified approach to a topic as politically fraught as climate change was destined to attract backlash, which has reached even the Guardian's own pages: In an article describing the decade-long attempts of the Rockefeller family to persuade ExxonMobil to acknowledge the threats of climate change, the oil giant told reporter Suzanne Goldenberg that it refused to comment on that or any future stories, "because of its lack of objectivity on climate change reporting demonstrated by its campaign against companies that provide energy necessary for modern life, including newspapers.”

The Guardian definitely isn't denying that what it's engaging in is advocacy: It partnered with the activist group 350.org for its "Keep It in the Ground" campaign, which calls on the Bill and Melinda Gates Foundation and the Wellcome Trust, the world's two biggest charitable funds, to divest their endowments from fossil fuels. Bud Ward, the editor of Yale Climate Connections, told Mashable that such a partnership was "unprecedented," to his knowledge. The Guardian has always made it clear, though, that it views climate change as an essential topic worthy of dedicating time and resources to. (It has certainly been an important source of analysis and reporting for Salon.) And advocacy journalism, several media experts told Salon, is much more common, and accepted, in the U.K. than in the U.S. So, to a certain extent, this latest editorial push isn't all that exceptional.

But it certainly looks special from the perspective of the United States, where the Wall Street Journal regularly pushes climate denial and disinformation on its Op-Ed page, and where even the more progressive New York Times has been known to use language that falls well behind the established science:

(It's well past time, agreed Joe Romm at ThinkProgress -- after all, scientists are now as certain that greenhouse gas emissions are the main cause of global warming as they are that smoking causes cancer.)

The Guardian, in other words, has gone much further than any other newspaper in embracing the scientific consensus on man-made climate change -- too far according to corporations with an interest in that consensus remaining less clearly defined, like ExxonMobil, would naturally argue. Kevin Smith, a former president of the Society of Professional Journalists and a current member of its Ethics Committee, argues that the Guardian's critics have a point -- and that the media owes it to its readers to both acknowledge the existence of climate deniers and to present the evidence they're relying on, even if they then go ahead and refute that evidence.

"I understand that after 30 years or so of reporting on concerns of climate change, and seeing very little happen while the overwhelming evidence continues to mount -- I get their sense of frustration," Smith told Salon. "I get the sense that they're pointing the fingers at the people they find to be culpable in this. And that's fine. But I think those culpable people at least deserve some sense of opportunity to defend themselves with some kind of evidence to suggest that everything else that's been written or suggested is false."

The Guardian can probably pull off its "no deniers" policy, said Columbia journalism professor Todd Gitlin, because it's owned by a trust, and not, as is the case with most U.S. newspapers, a profit-driven corporation. And while its campaign is warranted, he said, it's likely also calculated: It's probably decided that becoming the face of the divestment movement will only serve to reinforce its brand. But he also argues that the Guardian's anti-fossil fuel stance isn't a major departure from the way other newspapers operate.

"We're not babies here," Gitlin told Salon. "Surely we don't think that a reporter from the New York Post -- a paper which ostensibly separates its editorial and news organizations -- is indifferent to the management's position on issue x, y or z when he contacts a source or when she decides what's a newsworthy question.

Most revolutionary in all this, perhaps, is simply the Guardian's acknowledgment that climate change is an important issue, and, for a six-month period, the defining issue. That's something we haven't seen from any other "traditional" media organizations, even though the science more than adequately justifies such a stance. Hundreds of the world's top climate scientists, after all, have come to the conclusion not only that human activity is the main driver of climate change, but that without drastic, immediate action, we're at risk of experiencing “severe, pervasive and irreversible” consequences. "Keep It in the Ground" is a campaign born from robust research showing that, in order to limit warming to 2 degrees Celsius, beyond which those negative outcomes become terrifyingly likely, we indeed must refrain from burning most of our remaining fossil fuels.

“To my mind, the science of climate change is without doubt," Rusbridger told Mashable. "The threat to the species is so severe that this is one of those rare subjects where you can move from reporting to campaigning."

Not only does accepting the reality of climate change lead to advocacy, it arguably impels it; if the Guardian's reporters have an overwhelming bias, it's that they're living on this planet, too, and the existential threat of climate change isn't one that, at this late hour, allows for much moderation. That's perhaps another reason why other media organizations have been less willing to fully embrace the science: The full implications of doing so are harrowing to even contemplate.

But it's also why more of them, at this point, really should.