It's the culture war, stupid: Why identity is at the heart of Indiana's "religious freedom" fight

Instead of getting swept up in talking points and legalisms, we should focus on the real reason Indiana matters 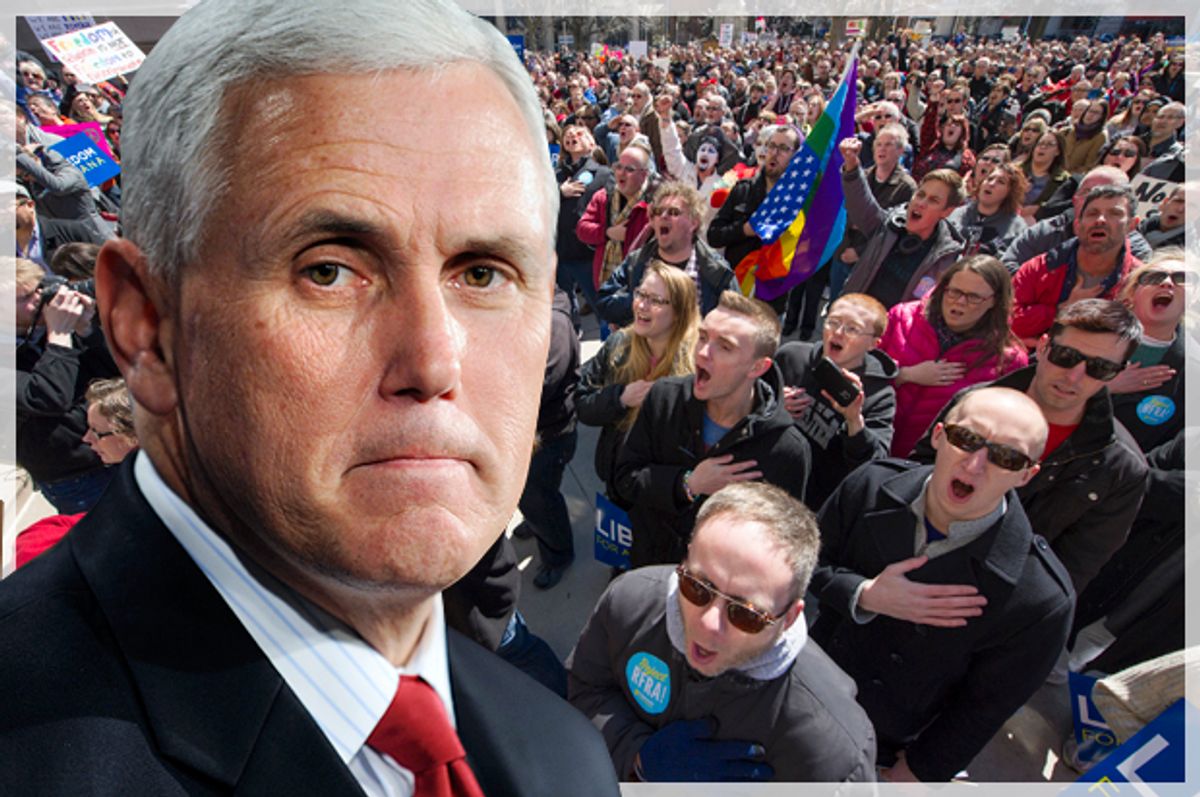 Although he is one of my favorite pundits, The Week’s Michael Brendan Dougherty is also a devout Catholic who tends to lean conservative on economics. So when it comes to the political arguments of any given news cycle, we more often than not disagree. But while that’s been the case with the contentious “religious freedom” law recently passed (and more recently amended) in Indiana, I do think Dougherty’s Tuesday column about the controversy made a point that has otherwise gone under-appreciated.

It’s an obvious one, too. A reminder that, to paraphrase Orwell, the hardest truths to remember are often the ones staring you in the face. What Dougherty understands is that the kerfuffle that consumed Indiana — and, to a lesser degree, Arkansas — during the past week was not about the Constitution, the Religious Freedom Restoration Act (RFRA), Indiana Gov. Mike Pence’s 2016 ambitions or partisan politics. It was about symbolism and the culture war; it’s really as simple as that.

People who don’t live and breathe politics likely figure this is self-evident. But for the kind of people who spend at least some time every day catching up on the latest news and political debates, the essential nature of the religious liberty vs. LGBT rights argument can get knocked down by a wave of ancillary information. Secondary or tertiary points — which only really matter insofar as they’re a sword or a shield to use in online arguments or while bickering with friends — grab the media’s attention. And eventually, the conversation drifts away from reality as well as what really matters.

For example, look at the sheer number of articles that have been written in the past week or so about whether or not Indiana’s RFRA differs from the one Congress passed in the 1990s. A cursory search will show you examples from Vox, the Indianapolis Star, Think Progress, the Federalist, the Washington Post and National Review. Generally, these pieces reach the conclusions you’d expect: The left-of-center sites report that Indiana’s RFRA is different — or that the recent Hobby Lobby decision has changed the federal law’s implications — and the right-of-center ones find that there are no significant differences.

If you simply want to know everything you can about the new policy in Indiana, or if you find constitutional questions particularly compelling, most of these pieces are valuable. And I’m absolutely not criticizing the journalists and editors who wrote and commissioned them; providing as much relevant information as you can is the journalist’s stock-in-trade. But because so much energy is put into arguing over a talking point, the real reason why the bill inspired such outrage gets lost in the shuffle, and you end up arguing over details that are ultimately beside the point.

A short segment about the Indiana fight, which I participated in for the conservative Newsmax TV, offers a good example. Overall, I felt things went pretty well. It was my first stint as a televised talking head, so I made more faces and bobbed around nervously more than I should have; but host Ed Berliner didn’t ask any cheap “gotcha” questions, and I thought the conversation he moderated between myself and the Washington Examiner’s Sarah Westwood produced more light than heat. Which, as anyone who’s watched five minutes of CNN’s Don Lemon knows, is rare for cable.

Still, I thought the framing of the segment, which was hardly different from the rest of the media, was a little off. Berliner asked me some questions about whether Indiana’s RFRA differed from the federal one, and whether it was so different from similar laws that have been passed by many other states. I responded by noting that there are some potentially significant differences. What I should have said, though, is that whether or not the law will do what its harshest critics say isn’t especially important. Because, above all else, it was the symbolism of the measure that had led to the boycotts and backlash.

If defenders of the law are right when they argue that, even before it was amended, it was very unlikely to lead to a kind of anti-gay Jim Crow, that wouldn’t quiet its critics. It might have tempered their outrage, perhaps, but it would never have led to a shrug or their giving the law their seal of approval. What bothers the law’s opponents is not so much its specific language as it is the implicit message they believe its passage sends. And that message is, more or less, that religious conservatives in Indiana still oppose same-sex marriage, no matter how much the mainstream opinion on the issue has changed.

Dougherty, to his credit, understands this. He wants his fellow Americans to “step back from where the culture war is leading us.” He wants us to take the philosophical ideas at stake — of pluralism, first and foremost, but also of privacy and private property — more seriously. He wants us to think more clearly, more analytically about our decisions’ possible implications. He wants us to stop jamming every political disagreement into the general culture-war framework, which is more about dueling identities than public policy. He wants us to actually learn about the RFRA.

Ultimately, I don’t agree with Dougherty when it comes to Indiana’s law. As I wrote earlier this week, I think his vision of pluralism, while intellectually consistent and well-intentioned, would lead to a culture even more balkanized than it is already. It’s too libertarian for my taste. But what Dougherty gets right — and what we should all keep in mind when discussing the RFRA in Indiana and in states yet to come — is that, whether we like it or not, the vast majority of Americans are thinking about these problems on a symbolic level. And if we want to talk about these issues like a real democracy, that’s the language those of us more wrapped up in the minutiae must try to speak.