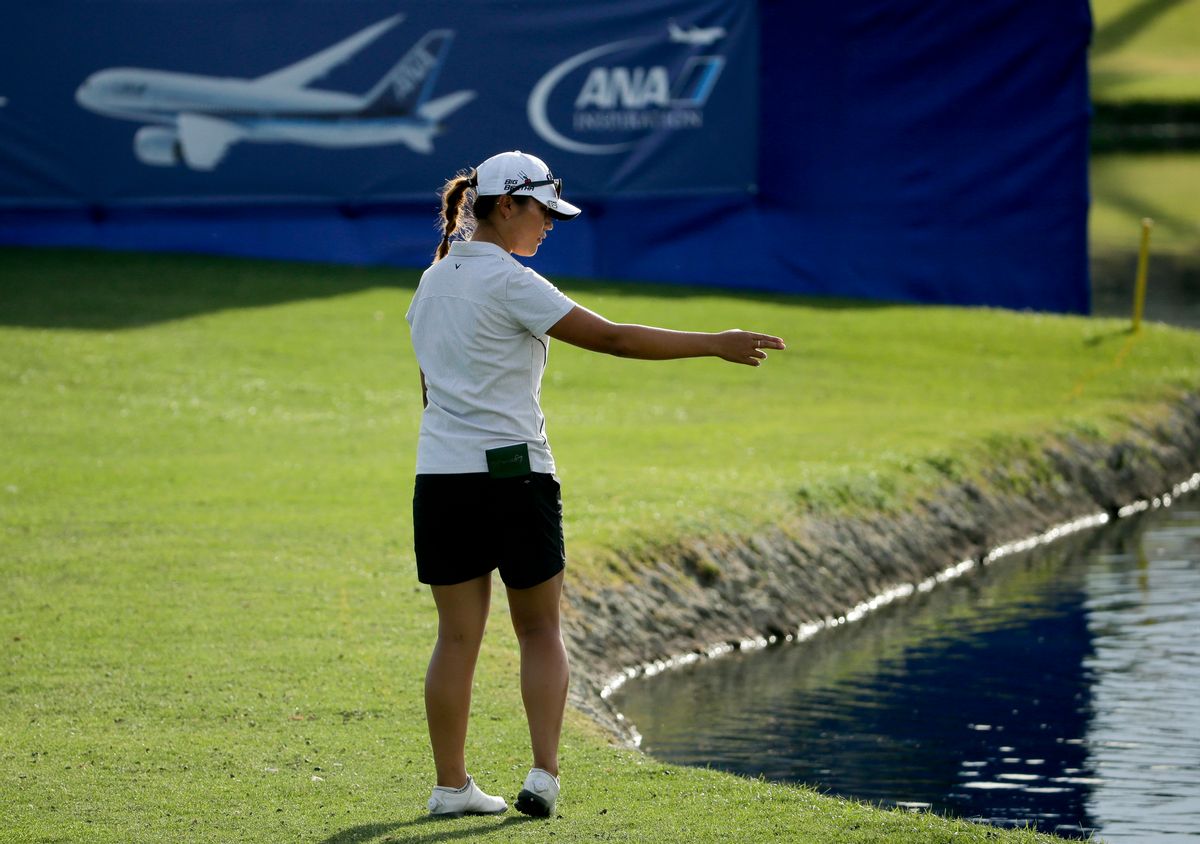 Lydia Ko, of New Zealand, looks for her ball in the water on the 18th hole during the second round of the LPGA Tour ANA Inspiration golf tournament at Mission Hills Country Club Friday, April 3, 2015, in Rancho Mirage, Calif. (AP Photo/Chris Carlson) (AP)
--

RANCHO MIRAGE, Calif. (AP) — Mission Hills' rough actually saved Lydia Ko some early strokes Friday in the ANA Inspiration. The thick tangled mess of Bermuda, rye and poa annua grasses struck back on the back nine to end her bid to break the LPGA Tour record for consecutive rounds under par.

The driving problems soon caught up to her in a streak-ending 1-over 73 in the second round of the first major championship of the year.

The top-ranked Ko missed eight of the 14 fairways, four to the left and four to the right.

"I just wasn't hitting fairways and then it just kind of becomes no fun," Ko said. "It's fun because you're trying to hit hook shots and low shots out of the trees. In that way it's fun, but no, I just really couldn't get my driver going. When you're in that kind of position, it's not easy around this course."

She nearly got away with another birdie after hitting into the left rough on the par-4 13th, but her 15-foot putt circled the cup and came back at her.

"After that 360 horseshoe, everything kind of turned around," Ko said. "I would have never thought it would do a whole circle around the hole. That's harder to do than holing that putt."

Needing a birdie on the par-5 18th to extend the streak to 30, Ko hit her second shot 190 yards into the water after catching a flyer out of the right rough on her layup attempt.

"I just hit a three-quarter 6-iron," Ko said. "I would have never guessed that I was going to hit a 6-iron 190, not even if I was Lexi (Thompson). Obviously, that was the wrong club at the end of the day, but I thought even if it flew out of there, it would have at least stopped."

After a penalty drop, her fourth shot rolled 15 feet past and she missed the par putt.

On Thursday, Ko shot a 71 to tie the record set by Annika Sorenstam in 2004. Sorenstam is working the tournament as an analyst for Golf Channel.

"I applaud Lydia and her play over the last few months," Sorenstam said. "I'm impressed with the composure she shows at such a young age."

Ko was tied for 30th at even par, seven strokes behind second-round leader Sei Young Kim. Before Ko started her afternoon round, Kim eagled the 18th for a 65 to get to 7-under 137. The long-hitting South Korean player hit a hybrid to 6 feet to set up the eagle.

The 22-year-old Kim won her first LPGA Tour title in February in the Bahamas.

On 15, she drove into the right rough and tried to play a draw around a large tree. She didn't make clean contact and the ball came up short, hitting high in the right greenside bunker and tumbling to the bottom. Her blast was too hard and low and went through the green, leaving a 15-footer from the fringe that she couldn't hole.

"I didn't really pull it, but just kind of dove a little left," Ko said.

On the front nine, Ko rebounded from bogeys on Nos. 3 and 5 with birdies on Nos. 6 and 7, then bogeyed No. 8 and birdied the par-5 ninth to make the turn at even par. She got to 1 under on the par-5 11th with what turned out to be her last birdie of the day.

Ko started the under-par streak in the first round of her victory last year in the season-ending event. She also won in Australia in February — the week before her New Zealand victory.

The teen made her 49th straight cut on the LPGA Tour, a career-long streak that started with 15 events as an amateur. She also has 10 straight top-10 finishes.

First-round leader Morgan Pressel was second at 5 under after a 72.

Thompson, the defending champion, was tied for sixth at 3 under. She shot a 69, also bogeying the 18 after following Ko into the water.