The subversive and shape-shifting 1994 album topped the charts but was never necessarily beloved. Why it should be 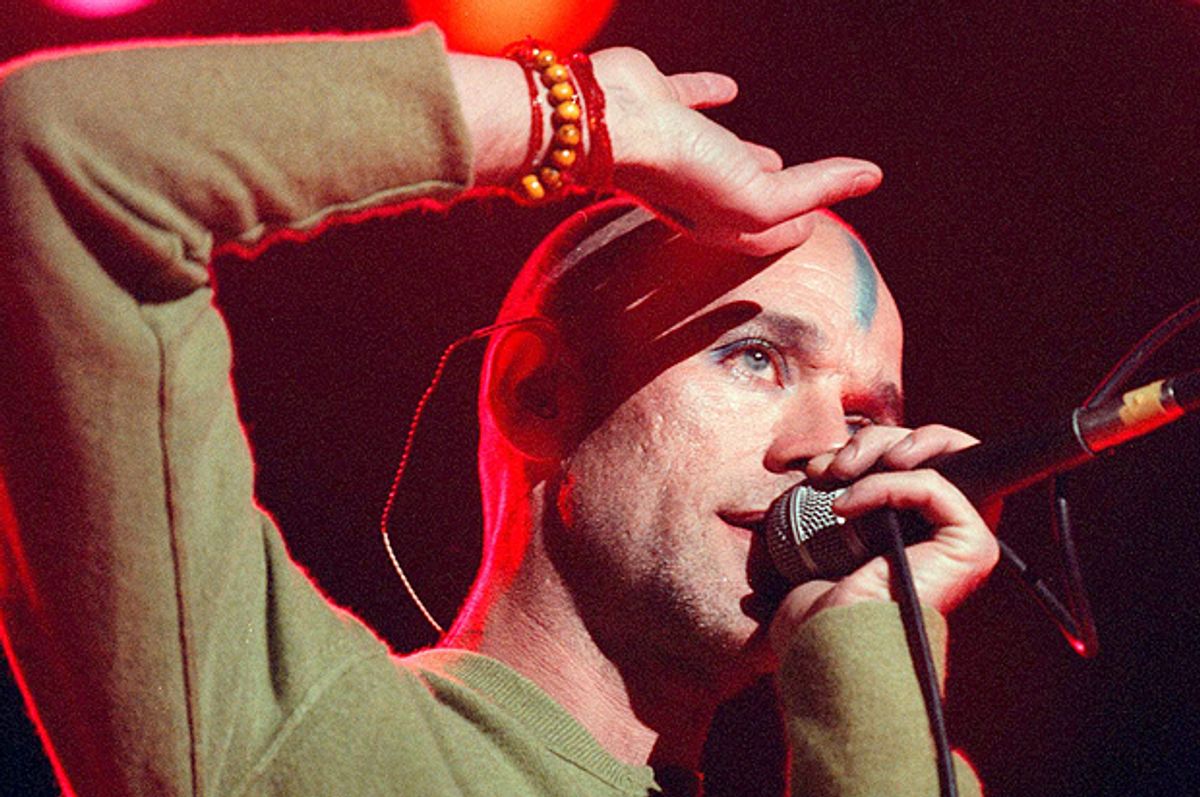 As the years pass, R.E.M.'s "Monster" has emerged as one of the most polarizing albums in the band's catalog. Still, the record is also one of the most interesting artifacts of the Athens, Georgia, group's career. First of all, it was unexpected: After previous attempts to make a rock-oriented album yielded two decidedly quieter affairs--1991's "Out Of Time" and 1992's "Automatic for the People"--the band finally succeeded in crafting a loud, brash record suitable for live concerts. Second (and perhaps most important), the album was a thematic curveball akin to U2's 1991 opus "Achtung Baby," in that R.E.M. toyed with their own mythology and decidedly tried not to sound like themselves.

As guitarist Peter Buck put it in David Buckley's "R.E.M.: Fiction, An Alternative Biography": "The whole record was a kind of reaction to having people following us around to a big degree, making the news in all these weird ways. … I would say that this was the only time where [vocalist Michael Stipe's] done characters that are creepy, and I don't know if people got that. He was getting out his things by acting out these parts that are not him. He took the mantle of front person to a degree he hadn't done in the past. It is a record that is our least direct and our tour was the least direct. ... I think it was all character-driven in a way--let's be someone else for a while."

This personality shapeshifting didn't hurt "Monster" commercially: The album debuted at No. 1 on the Billboard charts, sold 4 million copies and spawned several hits. Time has also been kind to the record, which sounds far weirder--and far more subversive--than it did at the time. And like many R.E.M. albums, its themes--ruminations on obsession, identity and fame--seem eerily prescient and timeless.

While there's no real bad song on "Monster," we decided to revisit the album and rank its songs. In ascending order:

The band's last Top 40 hit has, over time, also come to feel like one of its most dated singles--and one of its least-essential songs. The protagonist is smugly satisfied that a deceitful person is getting their comeuppance and is refusing to be a victim anymore--"Stop laying blame/You know that's not my thing"--although an exact motive for this vindictiveness is never clear. The song's charred riffs and explosive chorus are engaging, but not as innovative as other moments on "Monster."

Musically, the weakest link on "Monster" is the delicate, piano- and organ-driven "Tongue," an homage to genteel baroque pop that would eventually be overshadowed by plenty of moments on 1998's "Up" and 2001's "Reveal." Still, the lyrics are far worthier: Written from the perspective of a woman who rues her inability to resist a paramour who is simply using her for sex, "Tongue" adroitly captures the feeling of self-loathing intrinsic to such a situation.

The "Monster" album-closer is mesmerizing, with an underbelly of sludgy, droning buzz overlaid with coiled rhythm guitars and wild-eyed declarations of all-consuming desire and obsession ("I can wing around your Saturn smile, shout at the moon," "And I want you like a Pisces rising"). Yet it's also the most unsettling song on a record full of both blatant and subtle unease; the relationship described in the song isn't necessarily consensual--and it's not necessarily going to have a happy ending. Either way, it's an appropriate capper for an album that never goes for easy answers.

One of those subtly genius songs, "Circus Envy" is written from the perspective of a circus animal seething with anger over mistreatment; the character threatens mayhem should escape ever occur. But like George Orwell's "1984," the song also functions as an allegory for anyone oppressed by government tactics, the patriarchy or any other suppressive forces. The underlying bomb-fuse sound effects, metallic-coated vocal processing and martial-sounding drums further contribute to the song's uneasy, apocalyptic feel.

"I Took Your Name" is a sonic and lyrical cousin to "Crush with Eyeliner"; the tune deals with chameleonic personalities and the subsequent havoc wreaked by those who shape-shift with nefarious intentions. Choppy guitar riffs, menacing vocals and spates of falsetto harmonies only encourage this tension.

A satirical look at commercial success and toying with labels (e.g., sexual preferences, religious beliefs) to curry attention and financial gain, the growling, gravelly "King Of Comedy" sounds like a fractured take on the liquid post-punk favored by R.E.M.'s longtime influence Gang of Four. Thematically, it also shares traits with the latter band's output; in the end, the lyrics condone the crassness of fame and superstars-as-objects:  "I'm not commodity."

About as punk as R.E.M. ever sounded (on record, at least), "Star 69" ranks up there with the Replacements' "Answering Machine" as one of the best rock & roll songs about antiquated technology. Take a chaotic tempo--the aural equivalent of amusement park bumper cars careening all over the place--add plenty of vocal delay and then pile on of stacks of jangly, haywire riffs; the result is oddly life-affirming.

Consider this a song a sonic holdover from R.E.M.'s recent acoustic elegies, and a welcome respite from "Monster"'s noisier songs, courtesy of its arpeggiated guitars and waltzing tempo. Like "The One I Love," "Strange Currencies" is also deeply misunderstood. On the surface, the tune's about a love affair; however, its lyrical desperation--"I need a chance, a second chance, a third chance, a fourth chance…"--and pointed descriptions ("I don't know why you're mean to me/When I call on the telephone") reveal the song's about an unrequited love affair where the rejected person isn't taking no for an answer.

On the surface, "Crush With Eyeliner" is about the age-old phenomenon of changing personality to attract a gorgeous crush. But like many songs on "Monster," the song has a creepy bent ("What can I make myself be (Fake her)/To make her mine?") and has quiet depth--in this case, an exploration of the slippery nature of identity. Sleazy, woozy electric riffs and grooves (as well as an ominous second voice from Thurston Moore) complete the seductive package.

Perhaps the most underrated song on "Monster" is "I Don't Sleep, I Dream." Sonically, it's a foggy daydream centered around glassy piano shards, askew guitar chime and pounding-heartbeat percussion; lyrically, it's an enigmatic, cryptic song that leaves things wide open to interpretation: "I'll settle for a cup of coffee, but you know what I really need." Plus, Michael Stipe's falsetto surge when he sings "I don't sleep, I dream" amps up the emotional urgency.

The buzzsawing first single from "Monster" heralded that R.E.M. was going in a different musical direction, from the tremolo-drenched riffs and the elliptical choruses to Peter Buck's rare solo on the bridge--a distorted, malleable beast that never turned out exactly the same way twice in concert. But "Kenneth"--which refers to a phrase uttered during a 1986 attack on Dan Rather--also fell in line with the album's commentary on pop culture and mass media. The titular phrase is intoxicating to the protagonist (perhaps because it's so slangy), while the sharply observant line, "You said that irony was the shackles of youth," sums up the generation gap that broke wide open during the '90s.

The death of Kurt Cobain hovered over "Monster," which was released less than six months after he passed. (Buck even played one of the Nirvana frontman's guitars in the "What's the Frequency, Kenneth?" video.) Fittingly, R.E.M. memorialized Cobain with the achingly straightforward, grief-stricken "Let Me In." As Stipe cries out in anguish at being unable to stop his death--"I had a mind to try to stop you. let me in. let me in/But I've got tar on my feet and I can't see"--the band surrounds him with dusty clouds of unfocused, distorted guitar and a keening, funereal organ. "Let Me In" succeeds because it is so wrenching--wishing only for a small, universal gesture that's heartbreaking in its simplicity.