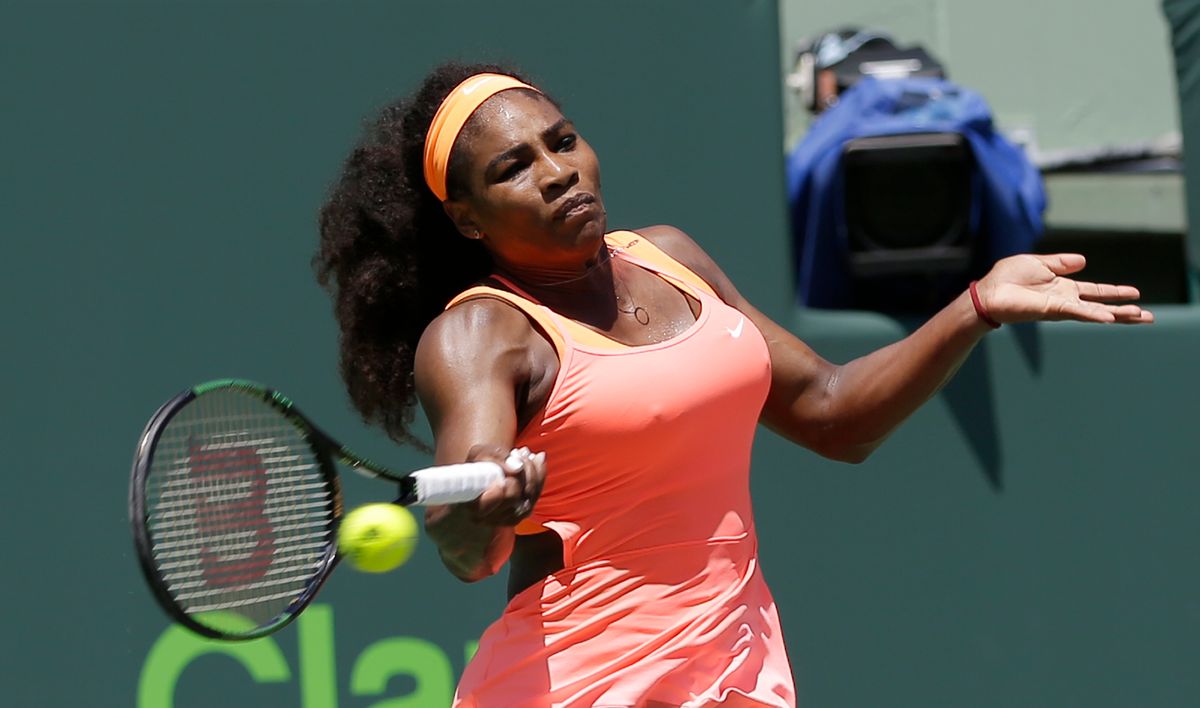 KEY BISCAYNE, Fla. (AP) — Clutching her latest trophy, Serena Williams brushed confetti from her arms and smiled for the cameras as she chatted with Martina Navratilova, her relaxed multitasking a reflection of vast experience with championship ceremonies.

Williams wins everywhere she goes, and she wins on Key Biscayne more than anywhere else. She earned her eighth title in the tournament Saturday and remained unbeaten this year by drubbing Carla Suarez Navarro 6-2, 6-0 in the Miami Open final.

Williams became the fourth woman to win the same WTA event at least eight times. Navratilova won Chicago 12 times, the most titles by a woman at any tournament.

Navratilova was on hand to present the top-ranked Williams with the trophy, her second this year. She won her 19th Grand Slam championship at the Australian Open in January, and has now won 12 consecutive finals.

The 33-year-old Williams improved to 18-0 in 2015. She withdrew before the Indian Wells semifinal last month with a knee injury but quickly recovered.

"I'd like to believe the older I get, the better I get," Williams said.

Williams was erratic at times as she navigated this year's draw, and was jeered for angrily pounding the court with her racket in an early match.

But the sun-splashed crowd was firmly behind her in the final. A roar erupted when she entered the stadium, and she had them cheering her winners from the first point.

"Thank you for believing in me and supporting me all these years," Williams told the crowd during the trophy ceremony. "I love you so much."

Suarez Navarro looked uneasy at the start but managed to hold in her first two service games. Williams pulled away from there, and her grunts grew louder as she closed out the first set.

She won the final 10 games, including 25 of 30 points in the second set. Mixing pace and direction, Williams won 21 of 22 points on her first serve, and she totaled 29 winners to three for Suarez Navarro.

Williams relied on more than mere power, coming forward to put away a volley on the first point, hitting delicate slice backhands and giving Suarez Navarro fits with her slice serve.

Williams said she backed off on the velocity of her serve because she had been struggling with it.

"I improvised today," she said. "I took some pace off to get my first serve in and it worked for me, because I haven't been serving in this tournament the way I would like to. Improvising was healthy."

Williams' demeanor was subdued for most of the final, which was 30 minutes old before her first fist pump. But she wore a big grin as she accepted the trophy.

Now 73-7 at Key Biscayne, Williams has won the past three titles. She considers it her home event because she lives 90 minutes up Interstate 95 in Palm Beach Gardens. She has gone home with the championship trophy eight of the 15 times she has entered, with her first title in 2002.

The 26-year-old Suarez Navarro was playing in the biggest final of her career, and she'll crack the top 10 next week for the first time. But she's 0-5 against Williams, and has won only 12 games total in those matches.

"When I play with Serena, I know that she's the best," Suarez Navarro said. "She has the game to make me play bad."