"Better Call Saul's" Jonathan Banks on playing Mike: "It brings out a lot of my sadness" 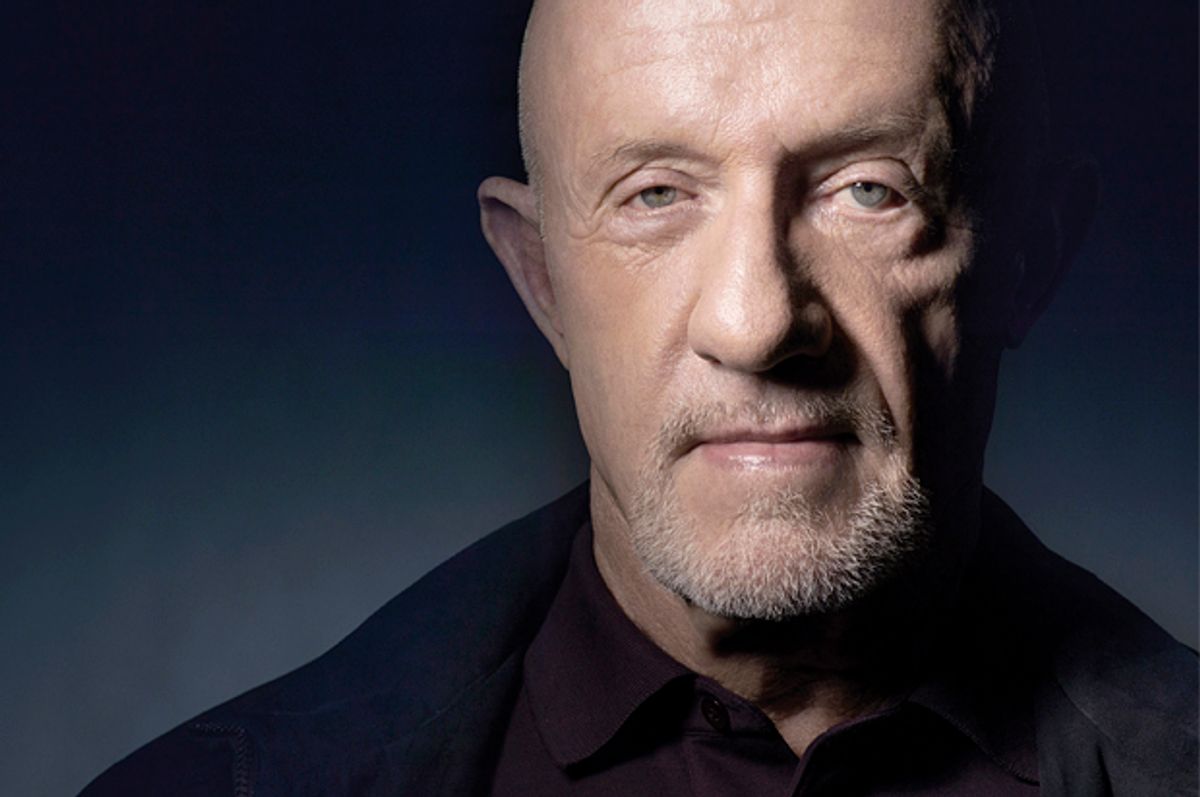 Jonathan Banks was nominated for an Emmy for his role as Saul's no-nonsense fixer Mike Ehrmantraut on "Breaking Bad." And after the sixth episode ("Five-O") of "Better Call Saul," when Mike's tragic past was revealed to viewers in flashbacks -- in a stunning, tour-de-force monologue where Mike tearily declares "I broke my boy" -- we have little doubt that Banks has secured his place on the ballot once again.

Mike was always a fan favorite on "Breaking Bad," but now we're truly seeing him come into his own on "Saul," as we learn more about what makes him tick, his relationship with Jimmy McGill, what kind of piece he packs (pimento sandwich, obviously). We caught up with the veteran actor on the phone from California to chat about the season and his character's arc going forward.

How much of Mike's back story were you aware of when you went into the project?

I didn't have any of it going in, when I said I'd come back and do it. In season 3, maybe, when I give my granddaughter the Mylar balloons and send her off to her mother and then I go and shoot people... Vince was directing that show and I turned to him and said, that's my granddaughter; that's not my daughter. I said that my opinion is, whatever happened to Mike has something to do with his son. Fast-forward a few years, when Peter called me and asked if I would be interested, he asked, do you remember when you said something about your son? And then on episode 6, Gordon [Smith] wrote me a love letter of a script and that's when we did the back story.

When you got the script for that, did that sort of gel with the assumptions you had been operating under so far about the character?

I had made up my mind, certainly, about what it was that had happened to his son, but when I saw the script I thought, great, this works just fine.

Have you envisioned a history for Mike before his time in the police force?

I don't have a pen in my hand, so I'm not going to be the one who decides that, but I will be doing Mike's back story probably for the rest of my life; I'll never be satisfied with it. I'll have ideas that will never be in cement because I'm not the writer, and I have to be flexible enough to do what I'm given.

What sort of ideas?

I hope so too. You had another great episode this season refusing to carry a gun and packing a pimento sandwich instead, which I know was a throwback to "Breaking Bad." What is it about Mike that gives him the confidence to show up unarmed to a job like that?

Well, he had done his homework about where this money was going to go and what these guys were doing, because they were doing it without the knowledge of their bosses. They're not going to give him any trouble.

I guess it speaks to a sort of boldness and understanding of the trade.

Yeah, and a lot of dramatic license.

And the scene with Mike disarming the other guys was great.

Oh, it was delightful to shoot, and those guys are such good guys, and they were good actors. All the guys you saw were such good actors! That was a lot of fun. Practicing the takeaway and dumping the clip out... I love doing that kind of stuff.

That always helps. The speech he gives to the drug dealer when he talks about good criminals and bad criminals, that seems very much to sum up some of the larger themes of the show as a whole.

I have my problems with that, in that— I can only speak for myself— that there are no good criminals. That's what Jonathan thinks; if you're a criminal, you're a criminal, and you're not going to be forgiving yourself, and you're certainly not good. But that's me. Now, as far as dialogue goes, I thought it was great.

And from the character's perspective it seems to really reflect his worldview.

Oh yeah, it sums up Mike a lot, about what Mike has gone through. Also, within that, if you adhere to that philosophy, there is a certain reason why his son was killed, you know? The point being, maybe it's not such a great philosophy.

One thing that I've noticed about "Better Call Saul" versus "Breaking Bad" is that the show seems to treat Mike and Jimmy really tenderly, whereas "Breaking Bad" was more unflinching with its main characters. Do you feel that there's a different approach to characterization on the show?

[Interruption] I just walked into the kitchen and my son has just come back from Albuquerque, where's he's been working forever, it seems like. I got my boy with me; I'm very happy!

Anyway, now let me answer your question: no. The show, because our crew, our producers, our writers... I have that sense of feeling very lucky and very much at home. Your point about them treating those characters more gently, I think there's a lot of truth in that, although I will say to you that there's no way Jesse wasn't sympathetic. You really wanted him to straighten up and fly right, you know? The feeling was that what was written when Jesse was concerned... there was compassion. Walt? Walt was just so wonderful to turn into a complete villain. Yeah.

There's been some real shifts in tone this season, between the darker Mike-centric parts and some of the lighter Jimmy bits. Do you think that those two threads are going to come together and the whole show is going to get darker?

I hope not. I hope Mike stays... you know, I've said this a hundred times but Mike has lost his soul, and Mike knows he's lost his soul. Mike has made a lot of compromises and he does not forgive himself. I can only speak for what I hope Mike does, and I hope-- Mike was hard a long time before his son died; Mike was a hard guy, and there's more prequel to the prequel.

Is it fair to say there's something special about this role for you?

Absolutely, there is. Absolutely. It would be naïve of me to think otherwise. I really enjoy doing this character. It brings out a lot of my sadness, of Jonathan's sadness, to come and do that. Maybe it's therapeutic in some ways, I don't know.

Mike has been stuck in the booth for a lot of this season, and it's been kind of slow to get him out. I think the show has been really keen to revel in the slowness -- they haven't haven't rushed to turn Jimmy into Saul. What are the benefits to this sort of slow-burn storytelling?

What you count on is that the storytelling is so good that you hold the audience's attention. As far as the writing goes, the storyline... I know people think it's absolutely great. I think many people do. A couple of people I've heard say, c'mon! I want it to move a little quicker! But it is what it is, and I think it's done very well. I can only judge from myself, and I know that if I were to be an audience member, I'd like it; I'd be watching.

What is Mike doing in that booth for all those hours? I know we saw him doing a crossword puzzle, once. What is he reading?

I would think that Mike would very much be interested in, for instance, Will Durant, who wrote "The Story of Philosophy," which deals with 50, 60 great philosophers. I think Mike is old enough that reading itself transports him and takes him to another place. He's not without flaws, but Mike does what Mike does. Mike knows how to do the bad things in the criminal world; he knows how to make a buck. He's in the booth because he needed a job. Trust me, I'm ready to get out of the booth. I would suspect he'd read history, too. Mike reads what I read, pretty much, and I'm a huge fan of Barbara Tuchman and "The Guns of August," about WWI, is one of my favorite histories; William Manchester's "The Last Lion," about Churchill.

He's doing some heavy reading in there.

We're sort of just starting to see Mike and Jimmy's relationship develop; what do you think is the basis of Mike's initial fondness for him?

Well, I think Mike was one of the first to realize that this guy was competent as a lawyer. I don't think Mike dwelled on it a great deal, but I think Mike finds him, at this point, not much more than interesting. He can be an irritation, so he's not taking him real seriously yet, but— and this is Jonathan the actor— I think he's taking him more and more seriously.

Do you guys have any idea yet of the story line going forward?

You know what? I never ask. That's just the way I like to work. But recently, I said to Peter, so tell me where you're going to go with Mike? And he looked at me and said, you surprised me, because I'd never done it before.

You just had to know?

Well, I'll pull back from that because I've just been around too long. You've heard me say that I so respect the writers, but they can go anywhere they want to go. I don't want to test my hopes; they're going to do what they want to do. In the end, I know they'll take care of me. I know that they like to write to the character Mike. You talk about something wonderful, and when you get that feeling from your writers and your producers, that they're excited about the character of Mike, that's a pretty nice place to be.

And you know you're not going to get killed off.