Last supper of the doomsday survivalist: The bizarre table spreads of apocalyptic Americans 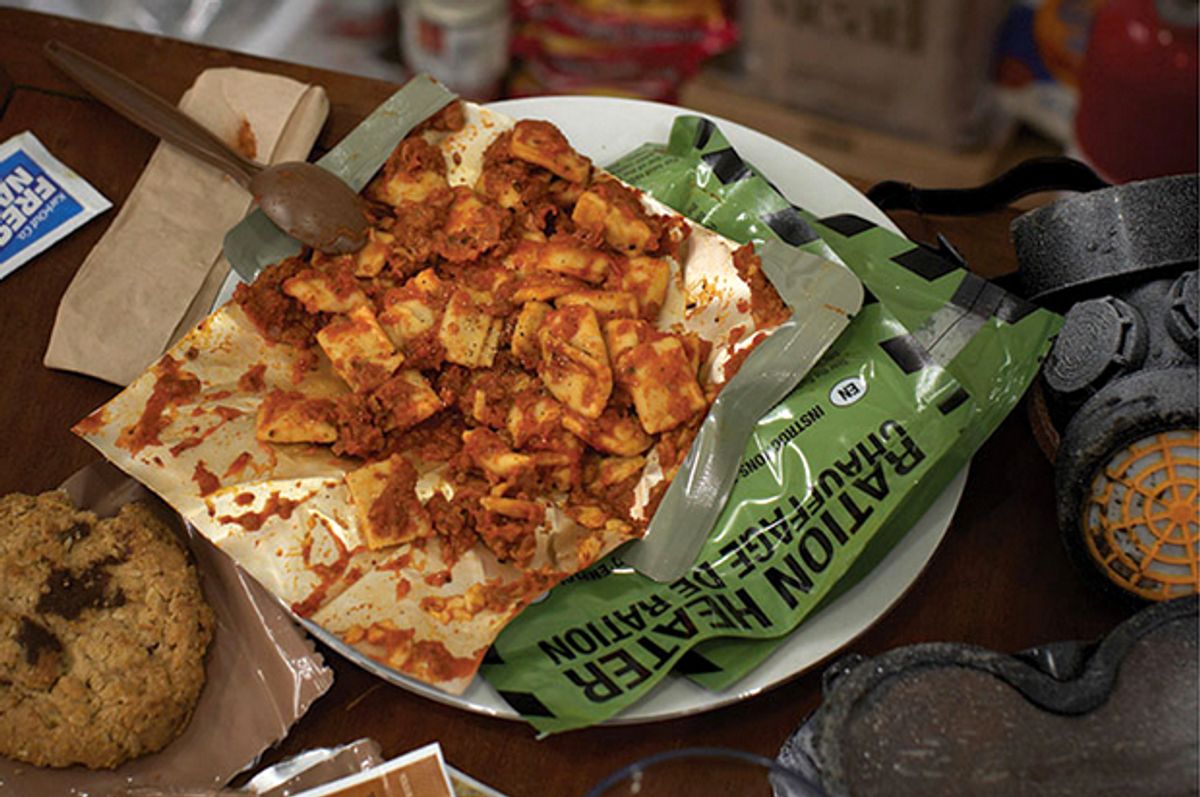 Jason Charles, Firefighter, New York Emergency responder in 9/11 attacks - Natural disaster may pollute the air like this again Preparation: NYC apartment can be sealed off like a bunker. Waterbob for bathtub to store drinking water. Food stored: MRE, Waterbob, Ramen, other shelf canned goods. Cause of doomsday: Volcano (Henry Hargreaves)
--

We humans are nervous creatures by nature -- it's what helps us survive. Once we had to worry about what we would kill to eat next. Now, that problem has been largely solved and modern humans are forced to reckon with the fear of what would happen if society were to collapse. While many of us deal with these worries with benzos and TV shows, others of us deal by preparing... sometimes more than is probably necessary.

Henry Hargreaves, a Brooklyn-based, New Zealand-born photographer, was fascinated by doomsday preppers -- those who stockpile supplies in preparation for an ultimate catastrophe. How will they continue to live a shadow of a normal life once society as we know it no longer exists? It was question that inspired him to photograph recreations of the meals these doomsday preppers plan on eating when every grocery store is closed.

Salon spoke with Hargreaves about his project, natural disasters and the uniting power of food.

I love this project. How did you come up with the idea for it?

I'm interested in outsiders, people who you don't immediately relate to. I just find it really interesting to use food as a common denominator, and you can relate to people who are usually unrelatable. I guess this is the third in a series: I've done prisoners' last meals on death row, musicians' backstage requests and then the doomsday preppers as the third in a trilogy. All of them are people who are kind of unrelatable, but suddenly through the very humane interaction with food, you get drawn into who they are. It's almost like a modern portrait; I'm doing a portrait of these people but they're not in it. Because the viewer understands the food, they understand the people.

I guess I became more aware of doomsday preppers after that National Geographic TV show. To me, the whole idea of doomsday and eating after the apocalypse is such a surreal thing. I'm like, do you even want to live in a world where you're having to fight for scraps of canned food and things? To me, the pleasure of living is all about being able to enjoy your food, so I was just curious as to what they were seeing happen after the apocalypse. It drew me into this whole little subculture. I wanted to use the food to show different personalities and outcomes and theories and things like that.

Did you have any expectations of what you would find?

I guess off the bat, I was expecting more of the extreme elements. I think my initial thoughts of doomsday are more along the lines of what's been sensationalized in the media, you know? Like "The Road" and "Mad Max," that kind of thing. As I spoke to them, it was actually much more logical than I had initially expected. It's more of a distrust in the current food distribution chain. That's the crux of it all.

Look, you have a snowstorm in New York and you go to the supermarket and there's nothing on the shelves and they don't know when the next delivery's coming. That's just a snowstorm; imagine if something big happens. They just don't want to be exposed if anything does come; it could be from a Hurricane Katrina all the way through to something more serious like solar flares. There was one about 150 years ago and it knocked out all the telegraph systems for nine months or something like that. There was one that nearly hit recently, and it would knock out all the communication systems around that side of the world. It's things like that, where it hasn't happened but it's not outside the world of possibilities, you know? Maybe nuclear warfare and all those things that were really threats in the '50s have been replaced by other things. I guess there are people who will always be in fear and paranoia that something's going to happen; whether it's Y2K or 2012 or whatever, they'll find something. Some of these are more relevant than others.

The city I grew up in, Christchurch in New Zealand, we had the second most violent earthquake ever recorded three years ago, and there wasn't even an active fault line running through our city. These things can happen. Talking with my family about what happened after the earthquake and all the problems there... like, suddenly all the roads are destroyed and trucks can't go anywhere and you can't get anything. There's little elements of all that stuff, but I just kind of like all the hypothetical stories these people have to tell about what they think is going to happen and how they're planning for it.

What was the process of finding your subjects?

I had the idea and was like, how can I pull this off? I asked a few people and there were a couple whose grandparents had fallout shelters from the '50s, but it was a different era. I ran into an old friend, and he had started dating a girl who did production for TV and was one of the producers on "Doomsday Preppers." She said she could introduce me to whoever I wanted, so basically I started watching the show and told her who interested me and why, so between people who had actually been on the show and other people who they had been in touch with but didn't use in the show, she reached out and made introductions to all these people who had really particular food-centric preparations. I just reached out, and some people wrote novels back.

I would imagine they were very eager to share what they were doing.

Oh, yeah. The issue was that there were some politics. There was a bit of conversion trying to happen.

In the photos, you said they're recreations. What did you actually take photos of?

My initial thoughts were to go and visit them but I didn't know how photogenic it would be. I'm sure it's like a really cramped closet with shelves close together and lots of products; it could be a shitty supermarket anywhere. The other thing was that it would be an exercise in spending money to go around to all these locations. My producer friend was also like, you have to remember that these are quite extreme personalities, and heavily armed, a lot of them. So I was like, yeah, maybe the visiting isn't the way forward and I decided to ask them about what foods they would hypothetically see themselves eating, a case study of what one of the meals could be like.

With the pictures, I try to give a few crumbs of information to tell a bit more about them. For instance, the guy in New York is a fireman, so there's a fire extinguisher in the shot. He's worried about the ash cloud, so I had a little gas mask covered in ash. There's little things like that that kind of frame out the stories. There's the one about the guy who's worried about the Chinese devaluing the U.S. currency until inflation goes out of control and America loses its way, and in the foreground of that there's a dirty, creased, tattered American flag that's kind of the metaphor for this empire falling. I try to use the pictures to tell a story.

What do you want people to get out of the project?

I never try to preach with any of these things and say, look, their idea is totally off the map. I just love the way that food has power to look at stories in a different way and connect with these people. To me, I was trying to show that the preppers are more about self-sufficiency than they are about craziness. That was something I learned through the process of doing this as well. To me, the main goal is actually more about connecting with food in a different way, and the subject of this just happens to be the preppers but it's more about your interactions with food and the stories it tells about you.

I always try to put the text in the images, so with this one I decided to do the text like the nutritional information on a can. I feel like when you put stuff out there on the Internet, it's about sharing it. If all the information is in the body of the text, I feel like the image loses its impact. That's why I made the conscious decision to include all these things, so that when people share it around it becomes much more immediate. To me, it's just these people who have these great stories to tell, and I'm happy to try to do that through food.
Check out the photographs below: