"Don't you want to be normal?"

Diagnosed with cancer, I found myself arguing with my female doctor over whether to reconstruct my breasts 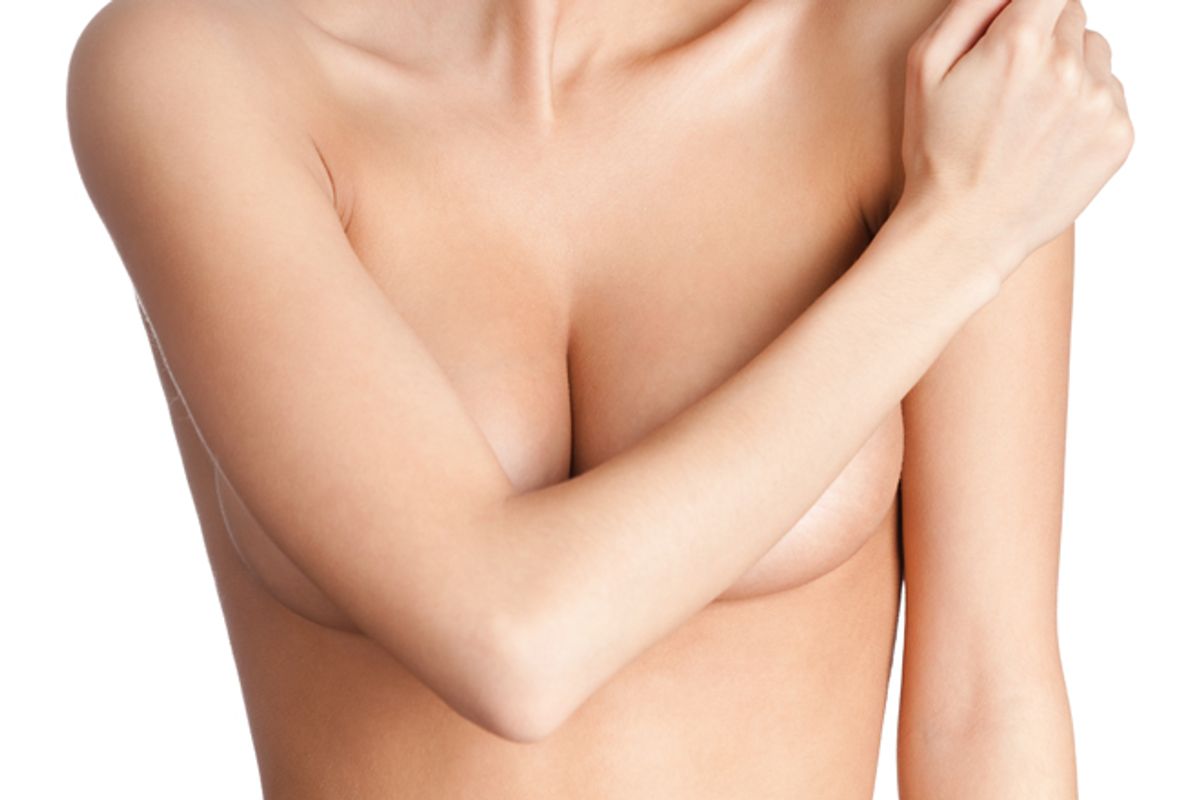 “Don’t you want to be normal?”

I was shocked that those words actually came out of the surgeon’s mouth. I think I must live in a more liberal bubble than I realize. I couldn’t believe she’d just asked me that. Do doctors really ask their patients such questions?

Wait—let me back up. You need context.

I have breast cancer, and was discussing treatment options with my surgeon, who was echoing everything my oncologist had just told me: that’d they’d be recommending chemotherapy before surgery, to hopefully shrink the tumor. If chemo shrunk my tumor a lot, they could perform a lumpectomy—maybe on one side, or even both. If not, they’d have to perform a mastectomy. But, she wanted to assure me, there was nothing to worry about, because whatever they did, they’d send me to a plastic surgeon, who could reconstruct my breasts.

My surgeon became visibly startled—and even a little agitated.

“Don’t worry,” she told me, “insurance will cover it.”

“No,” I said, “I understand that. I’m just thinking that breasts have been a nuisance for much of my life, and I might be ready to be done with them.

And that’s when she broke out the line: “Don’t you want to be normal?”

More from DAME: "The Future of Loneliness and Silicon Valley’s Sexism"

I didn’t know what to say. I was angry—angry and tearful. We were arguing now, even as I tried to remain calm and rational. Didn’t I have enough to worry about with the cancer? Did I really have to be fighting with my doctor—my female doctor—over my choice whether to reconstruct my breasts? If I had to get a mastectomy, I was being advised to get a boob job afterward—having inserts to bring up my breasts to a C cup. It would add months of surgical recovery, more painful procedures. That had to be optional, yes? Up to the patient’s discretion?

I’d already had this argument once before. I grew up with large breasts—I was five feet tall, and I’d developed DD cups at 9. My preteen and teen years were spent walking hunched over, trying to minimize their size (and the boys’ attention), generally to no avail. Those breasts were uncomfortable and sweaty in warm weather, and over time, they made my back ache.  They were large enough to require bras for support, bras that were expensive and sometimes hard to find. It wasn’t until I began seriously dating in college that I discovered the benefits of having big breasts—though I still would’ve preferred mine to be smaller.

And I did make mine smaller. I’m 43 now; I had a breast reduction when I was 38, after I had my two kids and finished nursing. Of course, nursing made my breasts even bigger, which was miserable. I couldn’t wait to get a reduction. I was eager to go down to a B cup. But my (male) surgeon told me I couldn’t. He said I’d be removing too much tissue, that it was less safe.

At the time, I wasn’t armed with enough information to argue or ask more questions. Having spoken with other women since the surgery, I’ve found that my experience is not uncommon, that others have also had to argue with their surgeons to try to get a reduction smaller than a C cup. One surgeon friend explained that if the most common procedure is to reduce to a C cup, the surgeon who has done that particular procedure innumerable times may not be confident enough in his ability to make them even smaller. The surgeon may also be worried about his patient feeling like her breasts were reduced too much—that if she changes her mind, he’ll have to deal with an unhappy patient. It may be difficult to augment them again, once breasts have been reduced severely. (Among other complications, there’s likely to be additional numbness, and the possible loss of nipple sensation.)

More from DAME: "Is There Anything to Gain From Ellen Pao's Loss?"

I was afraid that if I pushed too hard, my doctor would decide against performing the surgery, so I went along with him, and agreed to go down to a C cup. I was hoping to do away with bras completely—and being a C cup meant having to wear one, especially while exercising—so it wasn’t everything I’d wanted, but the smaller size was a vast improvement.

Now here I was, facing breast surgery again. Amid the terror of having cancer, there was a silver lining: I could be rid of my breasts if I wanted. I didn’t want to lose my nipples—they’d been good to me for many years. But if they had to go, then I wasn’t sure I was interested in having fake breasts. I already knew from having reduction surgery that skin sensation was greatly reduced—the area under my breasts is still somewhat numb, even four years after the reduction, in comparison to the rest of my skin. Did I really want two numb implants inserted into my chest?

I worry about how these decisions could affect my sex life: I’m polyamorous. I’ve been with my husband, Kevin, for 23 years, and with my long-distance sweetie, Jed, for 17. In theory, I have the freedom to date other people too, though with two small children, I haven’t had time or energy to pursue that in quite a while. I know Kevin and Jed would miss my breasts, yet I feel quite sure that they’d adapt, and that we would still have great sex. I know not every woman is so lucky.

I thought about all of this as I talked with my surgeon. “You’re a professor,” she was telling me. “You’ll be standing in front of a classroom, and you’ll want to look pretty.”

What I most wanted in that moment was to get out of the room. I do understand why she was trying to persuade me. In our society, a woman’s worth is often wrapped up in how well she conforms to conventional aesthetics. And it’s probably true that if I went breastless, I would suffer some social, if not career consequences. I might have a harder time finding dresses cut to fit me. And it could potentially make things difficult for me if I should reenter the dating scene.

A bigger problem is self-esteem. Insurance covers breast reconstruction after mastectomies; boob jobs, however are not covered, and aren’t they essentially the same thing? Yet there’s a strong argument to be made that having breasts is a huge part of women’s self-image—even mine—and that without them, many of us may find our self-image compromised.

Which is to say, I appreciated my doctor’s concerns, and since my own surgery is still six months away, after I go through neoadjuvant chemotherapy, I don’t know which I will choose: lumpectomy or mastectomy, reconstruction or not. What has infuriated me was that my doctor would wield the word “normal” at me as if she knew who I was, and then argue with me about my decision.

I write this in part as a plea to any medical professionals who might be listening. Please, advise us of our options. Make your recommendations, and if you happen to know that 99.9% of women who have gone through breast cancer and mastectomies feel much more emotionally stable if they choose to do reconstruction, then that is absolutely a valuable piece of information for your patients to have, and do bring it to the table. But listen to your patient, let their needs and desires guide your advice and advocacy. Try, as best you can, not to let current social prejudices inform your practice of medicine. First, do no harm.

And for the love of all the gods and little fishes, please do not ever ask a patient, “But don’t you want to be normal?”