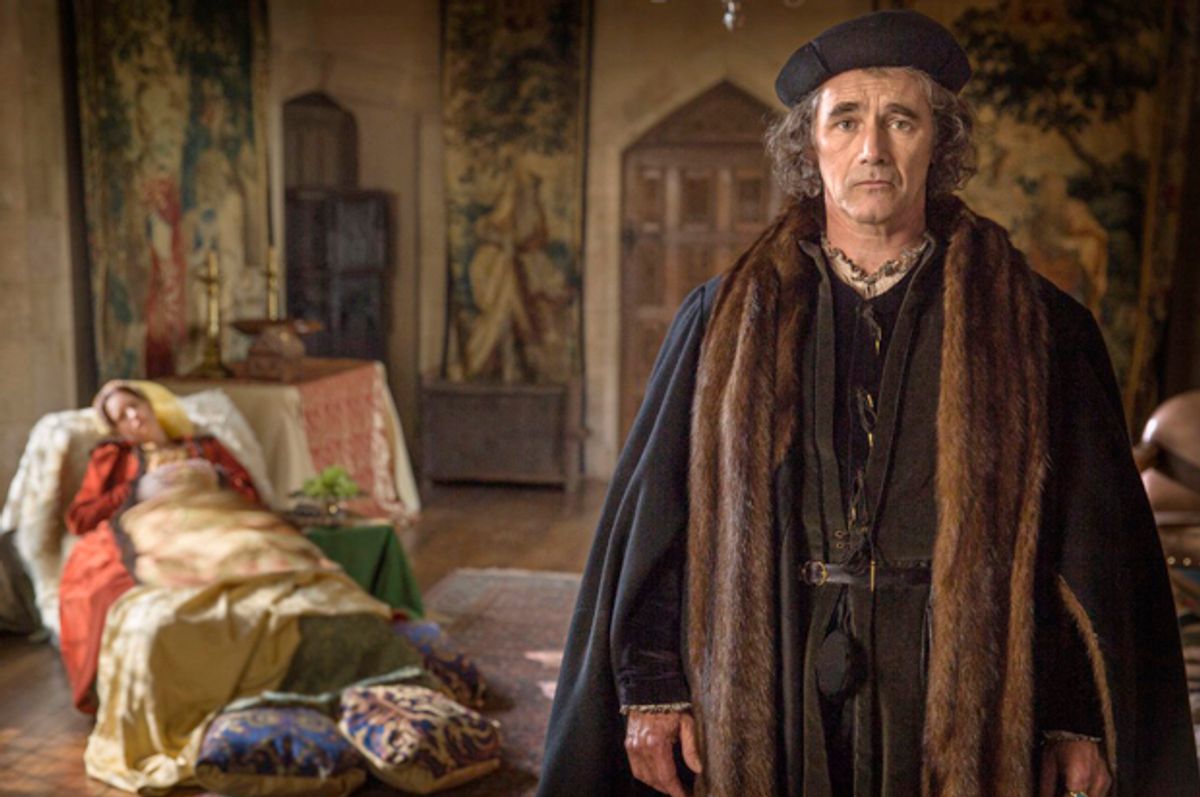 There wasn't much all-family appointment television during my '70s childhood, but two low-budget BBC miniseries shown by "Masterpiece Theater" always brought everyone to the living room: "The Six Wives of Henry VIII" and "Elizabeth R." Shot on video and directed with undeniable staginess, these shows were nevertheless crammed with excellent actors, particularly the incandescent Glenda Jackson as Elizabeth I. (You can stream "Elizabeth R" on Hulu. It holds up.) This was "quality television" in the most old-fashioned, PBS sense of the term. Our parents considered it educational, and our teachers scheduled their Shakespeare segments to coincide with the broadcasts.

It's hard to imagine any classroom endorsing "The Tudors," a glossy, softcore Showtime production featuring Jonathan Rhys Meyers as Henry VIII, leering at a series of lingerie models as their linen smocks slide sensuously to the flagstones. Then there's the CW's stupendously moronic "Reign," very, very loosely based on the early adult life of Mary, Queen of Scots -- a Stuart, granted, but still a major player in the Tudor story. That show is chiefly an occasion for minor-league starlets to stand around in fancy dresses, simpering at cute guys and speaking without contractions. The royal dynasty whose doings were once the subject of prestige television has, in our time, become a vehicle for thinly veiled trash.

This weekend, however, the highbrows will attempt to regain the field with the BBC dramatization of Hilary Mantel's Booker Prize-winning novel "Wolf Hall." Can it be done? Mantel certainly seems to have achieved it in the kingdom of print. One thing you can count on if you tune into "Masterpiece" this weekend, is an absence of courtly cheesecake and lines like, "But the people love her, majesty."

The book world has experienced its own version of the pulpification of the Tudor saga; a thriving subgenre of historical fiction -- call them princess novels -- that involves describing events of the Middle Ages and Renaissance from the perspective of young British and European noblewomen. Anne Boleyn -- daughter of a scheming, arriviste clan -- is the ur-model for the heroines of such novels, but that ground has been trod so often that authors have had to turn to peripheral figures from the notoriously confusing Wars of the Roses in their quest for fresher material. Still, apart from Eleanor of Aquitaine, who has always enjoyed a fan base all her own, and perhaps the tragic Lady Jane Grey, these ancillary aristocrats owe their fictional resurrection to the readerly hunger awakened by novels about Anne Boleyn.

The doyenne of this genre is Philippa Gregory, whose novel narrated by Anne's sister, Mary, "The Other Boleyn Girl," was made into a 2008 film starring Natalie Portman and Scarlett Johansson. If not quite a queen of the bestseller list, Gregory is surely one of its duchesses. She has produced, among other books, a six-volume series on the Tudor court and another on the Plantagenets, approximate a novel per year, to great success. That, however, is nothing to the track record of her extraordinary forerunner, Eleanor Hibbert, who wrote princess novels under the name Jean Plaidy, as well as gothic novels as Victoria Holt and historical sagas as Philippa Carr, among other pseudonyms, to the tune of several books per year.

Plaidy's princess novels, although relatively staid and exhibiting all the sloppiness you'd expect considering the rate she churned the things out, remain popular. The circulating branch of my library has almost a whole bookshelf of Plaidy's works; by contrast, the historical novelist Thomas Costain -- a big influence on George R.R Martin -- is entirely unrepresented. Today's most prominent male historical novelists, writers like Bernard Cornwell, show a marked lack of interest in the Tudors, preferring to chronicle the adventures of soldiers, wandering knights and other men of action, mostly set in earlier, wilder centuries. To paraphrase the Fonz (I hope you're appreciating my antiquated TV references), the Tudors, like Elvis, are a chick thing.

Why? Well, the reign of Henry VIII was one of the few periods in history when momentous affairs of state hung on the aspects of life that women tend to view as their purview: sex, love, marriage and childbearing. You could say (as many have) that Anne Boleyn's expertly played game of hard-to-get changed the course of a nation by causing Henry to split from the Catholic Church. In reality, most monarchs of Henry's day and the centuries leading up to it were chronically hard-up for cash. They were always seeking funds to prosecute the endless warring that substantiated their feudal glory. As the historian Barbara Tuchman wrote of the 14th century, "the status of nobility derived from birth and ancestry, but had to be confirmed by 'living nobly' -- that is, by the sword. ... The one certain criterion was function -- namely, the practice of arms." But wars, even more than lavish habits, are expensive, and Henry coveted the Church's English holdings. It was not just for love that he broke with Rome.

Finance, however, is not typically the stuff of exciting fiction, and it's so much more fun to look at the Tudor court as a hothouse where people's intimate lives trumped everything else. To best understand the allure of princess novels, compare, say, the first chapters of "The Other Boleyn Girl" with the beginning of the YA novel "Gossip Girl." It is, essentially, the same story. The characters are teenagers obsessed with fashion, with who's in and who's out as well as who's hooking up with who. As the novel opens, they brace themselves for the return of a long-absent peer. She's beautiful, with an enviable sense of style (you really can't underestimate the role that costume description plays in princess novels), and she promises to shake up the existing social hierarchy by seducing the most desired male. Anne Boleyn is the new girl at school who steals the quarterback away from the head cheerleader.

High school is the analogy by which American popular audiences view the British class structure -- not as an entrenched system of economic exploitation but as a fascinating spectator sport in which rivals for high-status positions duke it out by fair means or foul. High school is the closest experience most Americans have to a society where everyone's role is dictated by an elaborate and largely unspoken set of norms.

Like most rigid systems, this one can be both reassuringly stable and brutal, so princess books often require disclaimers from their heroines even as the books themselves indulge their readers' hunger for luxury, catfights, betrayal and dish. Mary Boleyn, the mild-mannered narrator of "The Other Boleyn Girl," describes a dancing lesson as a "savage battle fought with smiles and sweetest words as to who would play which role in the masque." As in many such novels, Anne Boleyn is the lead mean girl, the Rachel McAdams of the Tudor court. She's an expert on fashion, sneering at her aging rival, Katherine of Aragon, for disdaining the French. In D.L. Bogden's "Secrets of the Tudor Court," she "bats her eyes and adopts a playful expression" when suggesting that Katherine's daughter should be nicknamed "Ugly Mary."

Yet Anne remains a touchstone, if only because she parlayed her sexual appeal, and the fickleness of a man, into a crown, only to lose everything when she failed to provide a baby of the right gender and the fickle man proved himself to be fickle once again. Hers is both a thrilling exercise of the power of feminine desirability and a cautionary lesson about what happens to those who dare to use it as the means to an end. Princess novels, as a rule, are fascinated by the retrograde fantasy of a received identity, of being born to a condition (nobility and/or beauty) that makes striving unnecessary. Why do, when it is so much more feminine to simply be?

For all these reasons, "Wolf Hall" and its sequel, "Bring Up the Bodies," come close to being anti-Tudor novels. Their subject, Thomas Cromwell, has a thoroughly unglamorous middle-class position. (Have you noticed that popular depictions of British class traditions focus on either the exotic upper crust or their equally exotic servants? There's a reason "Downton Abbey" pays almost no attention to doctors, tradesmen and lawyers.) But for Mantel, the Tudor period is more than a theme park or school story spiced up with kirtles and beheadings. It's the hinge between Medieval Britain, with its feudal social institutions, and modernity. Cromwell represents the possibility of a meritocracy. Henry keeps him around because he is so clever and effective, but certain aristocrats resent and insult both him and his beloved mentor, the equally lowborn Cardinal Wolsey.

Cromwell is also, of course, a man, and furthermore one with an ordinarily happy marriage untroubled by mistresses and tragic affairs -- at least until his wife and daughter die in an epidemic, the sort of grim, meaningless misfortune all too common in his time. Mantel has yet to publish the novel that relates his fall from favor and execution, but what she's written so far jibes with the view of Cromwell as the primary architect of England's transformation into a modern state. ("Modern" in the sense that historians use it, to describe the period beginning with the Renaissance.) Cromwell helps liberate England from the spiritual dictates of Rome and makes it a place where the protestant ideal of an individual's direct relationship to God becomes increasingly valued.

But, of course, just like Anne's power, Cromwell's still depends on the favor of the king, a king whose capriciousness in personal relationships is legend. And Cromwell himself is subject to primitive, vindictive impulses, wreaking brutal vengeance on those who have insulted and mistreated Woolsey and himself. Most Tudor novels are about intrigue, but Mantel's is about politics, in the broadest sense of the term: How should we run this society, and is it even possible, given our darker urges, to run it fairly?

The fine BBC production of "Wolf Hall" is alive to these questions. Instead of his notorious mug (Cromwell was said to have the face of a "murderer," and he was also reputed to have been one), Mantel's hero is given the sensitive, almost otherworldly countenance of the great actor Mark Rylance, who looks more like a saint. Initially, Rylance seems miscast, but part of the significance of Cromwell's story is that our destiny isn't written in our birth or our faces. For Mantel, Cromwell represents the possibility that what we do can reconstitute who we are, and Rylance the actor does just that, transforming Henry's clever bulldog into a man whose soulfulness can be read by the naked eye. His performance is the vigor and majesty of Mantel's prose made visible. That doesn't, however, make Rylance's Cromwell any less implacable when it comes to his enemies. Mantel doesn't hesitate to show his worst side, which is pretty scary.

Perhaps the secret of the Tudors' appeal is this: That, standing as they do on the cusp of a great shift in Western civilization, it's easy to read almost anything into their story. Some of us are beguiled by the pageantry and romance of hereditary privilege; others want to dissect the first stages of its long dismantling. My parents (rightly or not) thought their children were learning something important from the those old BBC miniseries, but today's viewers seem content to consume the same stories as pretexts for sumptuous outfits, gory executions and racy shenanigans. Mantel may have reclaimed this territory for a more serious, thoughtful and literary type of fiction, but human nature being what it is, the princess novel, like the ruthless side of Thomas Cromwell, will not surrender without a fight.