The Scientology paradox of Neil deGrasse Tyson: What his defense of the religion gets wrong 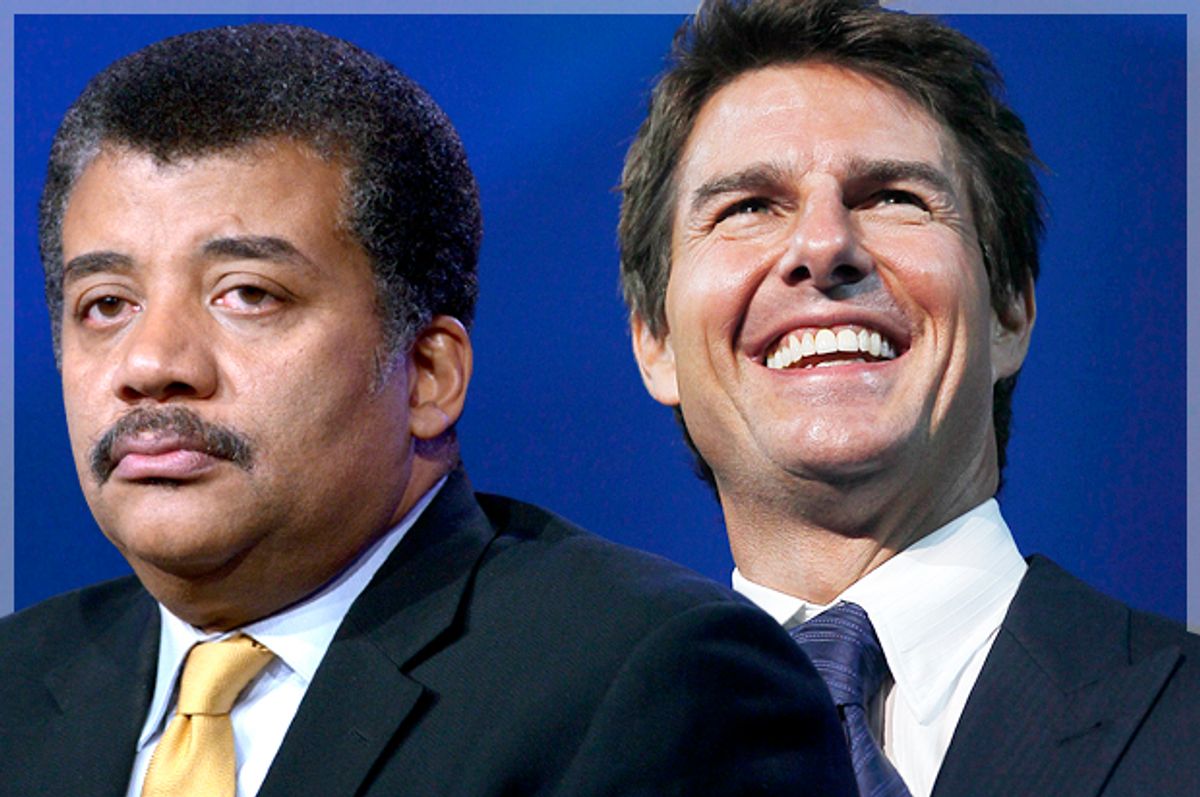 I like Tyson, and I believe he does important work in advocating for and defending science to the general public, even though I’ve criticized him for his views on philosophy before. So I’m always interested in reading pieces about him, especially when they have a sensational-seeming headline like the one mentioned. And, while Tyson doesn’t defend Scientology because he’s secretly a member, what he has to say about it is somewhat worrying nonetheless.

The interviewer begins by asking Tyson his opinion on the current state of science, but then quickly pivots to Scientology because “the intergalactic story of Xenu does encroach on your territory a bit.” Tyson responds cautiously, mentioning by way of comparison the “crazy” Catholic belief that the Eucharist wafer is literally transformed into the body of Christ during Mass. He then elaborates:

“What matters is not who says who’s crazy, what matters is we live in a free country. You can believe whatever you want, otherwise it’s not a free country—it’s something else. If we start controlling what people think and why they think it, we have case studies where that became the norm. I don’t care what the tenets are of Scientology. They don’t distract me. I don’t judge them, and I don’t criticize them.”

This response is typical of Tyson’s diplomatic approach to the culture wars, like when he explained last year why he doesn’t use the term “atheist” to describe himself. “He has as much interest in meeting with other people to discuss their absence of belief in God as in meeting with non-golfers to talk about their absence of a passion for watching golf," as NPR's Tania Lombrozo explained.

But Tyson’s contention that he doesn’t care enough about Scientology’s claims to judge or criticize them is at odds with his recent emergence from his diplomatic tortoise shell, criticizing Florida’s proposed ban on using the term “climate change” in government communications. Of that controversy Tyson said, “Now we have a time where people are cherry picking science. The science is not political. That's like repealing gravity because you gained 10 pounds last week.”

But even this attack is somewhat oblique, because he’s not directly accusing the powers that be but those of us who put them in power: “We should be talking about what we are going to do about this. I don't blame the politicians for a damn thing because we vote for the politician. I blame the electorate.”

But in his effort to be tactful, Tyson fails to appreciate the power of the powers that be, and that’s why he should be concerned with the teachings and influence of Scientology. Educating the electorate is necessary but not sufficient for rectifying the harmful effects of ideology; education alone can’t do much to influence those in power in the here and now.

The sins of fundamentalist religion are all around us, and have been since the beginning of recorded history—from the Canaanite genocide by the Israelites to the Christian crusades to the rise of the Islamic State. And while Scientology doesn’t have a hold on the rest of the world, and is only a small religion practiced by a minority here in America, the psychological and physical damage it inflicts on many of the individuals who get caught up in it is still real.

Consider what the HBO documentary "Going Clear" has exposed. As Vulture's Bilge Ebiri put it:

[Scientology's] current leader, David Miscavige, who took over after L. Ron Hubbard’s death, sticks to the founder’s credo, “Never defend, always attack.” The brave souls who spoke out for ["Going Clear" writer] Wright and for ["Going Clear" writer/director] Gibney, some of whom were at the uppermost levels of the organization, have been harassed, followed, threatened. But many of those still in the religion fare worse, with elaborate punishments that would be considered assault and torture if you or I did it, but in Scientology’s case are—amazingly—protected under the First Amendment as freedom of religion.

It’s easy to point out that while Scientology may be bad, other religions have done worse things. But that doesn’t make the terrible things Scientology has done any less terrible. Arguing whether the sex-abuse scandals of the Catholic church are worse than the psychological damage and physical beatings in Scientology allegedly administers seems entirely beside the point. They’re both abuses that need to be stopped in the here and now.

Tyson is correct to say that people in a democracy can believe whatever they want—whether that’s believing that humans rode dinosaurs into Noah’s Ark, or that humans were brought here billions of years ago by an alien dictator and then blown up with hydrogen bombs in volcanoes. Many people are able to get along just fine in an otherwise rational society despite believing those things. But history is all too clear that more worrisome problems begin to arise when you use the power of religious beliefs to have power over others.

Tyson reasonably wants to limit that power through the democratic electoral process. He says that “if you have one view or another based on faith and you want to legislate that in a way that affects everyone,” and that it’s “improving the educational system that shapes the people who elect such representatives in the first place.” Again, he is absolutely right, but that’s only one piece of the puzzle—it does nothing to stop the horrible acts being committed by those motivated by their religious beliefs, whether they be those of Christianity or of Scientology.

Tyson understands that something like refusing to deal with the reality of climate change is a clear danger to humanity. And he says he’ll be all “up in your face” if you try and bring the Bible into a science classroom. And when a student recorded his teacher’s fundamentalist Christian rant in his history class, Tyson penned a succinct letter to the editor in The New York Times in 2006 that read: “People cited violation of the First Amendment when a New Jersey schoolteacher asserted that evolution and the Big Bang are not scientific and that Noah's ark carried dinosaurs. This case is not about the need to separate church and state; it's about the need to separate ignorant, scientifically illiterate people from the ranks of teachers."

I understand that, given Tyson's high profile and demanding career—the fact that he “has the universe to deal with,” as he puts it—he can’t actively work to combat the clear and present danger of those in our society who exploit the power they have over others. But he should at least refrain from lending tacit support to harmful doctrines, whether they originated thousands of year ago in the dreams of sheepherders, or decades ago in the talented but twisted mind of a science fiction writer.