Wall Street and the wingnuts win again: Radical right and radical wealth have captured both parties

The public opposes the extreme right and big banks. The GOP's hopeless, but so are Schumer and Hillary's Democrrats 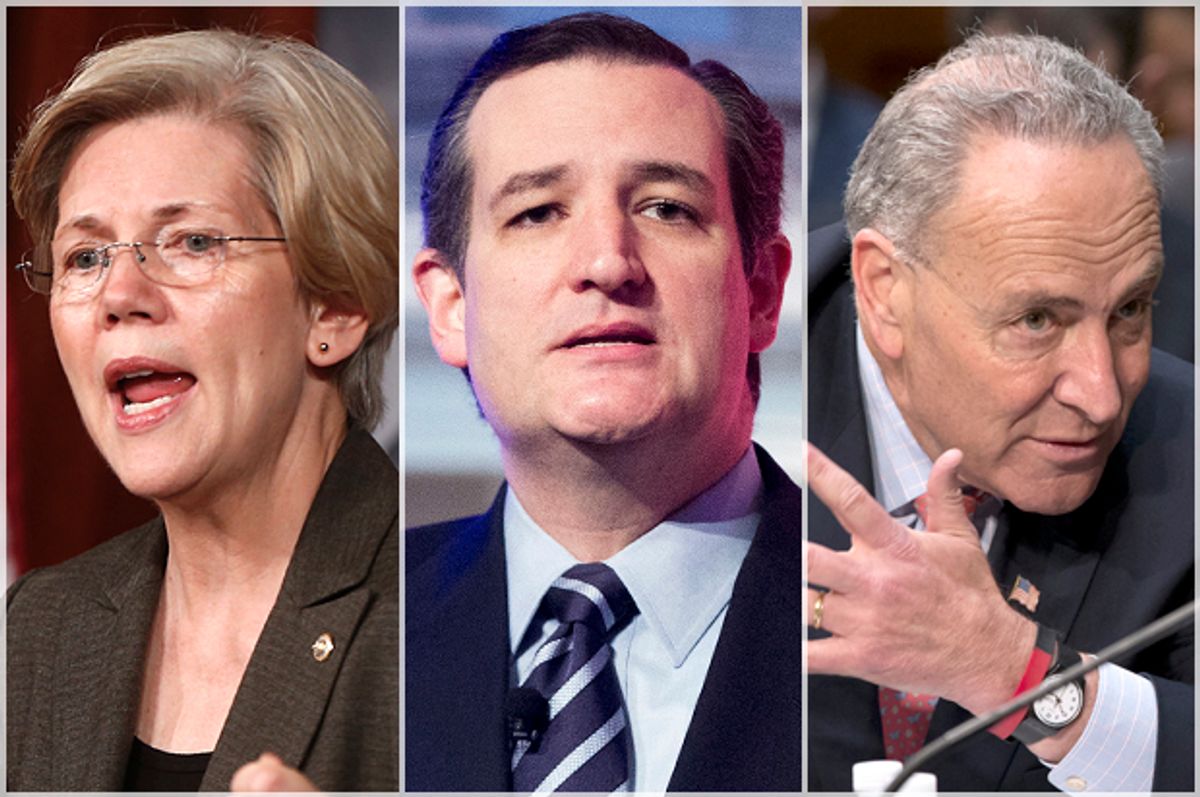 Say what you will of Congress but it’s been busy lately. In the Senate, Bob Menendez is busy being indicted. Harry Reid is busy retiring. Chuck Schumer is busy being promoted, and also beheading his old pal Dick Durbin. Some Republicans are busy running for president; all are busy not confirming Loretta Lynch, not passing a sex trafficking bill, and pretending to pass a budget (but not really doing that, either).

The House is always busy investigating Benghazi, repealing Obamacare and not reforming immigration. Not writing a real budget frees up members to write letters urging senators not to vote on executive nominations. If there’s a lull in the action they can invite a foreign leader in to help the president manage our foreign policy. The point is to stay busy, an idle mind being the devil’s workshop.

How does a do-nothing Congress manage to do so many things people hate? The Washington crowd blames the system and they’re partly right. When politics is all fundraising and performance art, Congress fills up with people who don’t want it to work. Because Ted Cruz and Tom Cotton don’t want to pass any bills, Mitch McConnell has nothing to hold over them. McConnell vowed to make the Senate work again, but his grip on the GOP caucus seems no tighter than John Boehner’s.

A far worse problem for Republicans is their agenda. You’d think a party that just pretends to do stuff would pretend to do stuff people like. Not so. The Bibi stunt and the Iran letter were meant to blow up a nuclear weapons deal two-thirds of Americans already favor. As Indiana and Arkansas Republicans made fools of themselves in the name of ‘religious freedom,’ CBS News asked voters about same-sex marriage. Sixty-two percent of the unaffiliated are for it; as are 70 percent of Democrats and 43 percent of Republicans. Last month McConnell urged governors to block EPA rules on carbon emissions that voters also back by two-to-one margins. See a pattern?

The same is true of nearly the whole Republican agenda. No one wanted Homeland Security shut down and hardly anyone wants the GOP immigration policy.  In a recent Pew poll, over 60 percent of respondents backed every part of Obama’s immigration plan, even after knowing he was for it. There’s a lot people don’t like about Obamacare, but only 30 percent want the outright repeal Republicans scream for every day. Almost as many—23 percent in a recent poll---want to expand it.  The Republicans are in even deeper trouble with their budget, or will be if anyone finds out what’s in it. In most polls 60 percent or more say big corporations and the rich pay too little in taxes. Absolutely no one wants the deep cuts Republicans secretly seek in Medicare and Social Security. Over 70 percent of Americans supported Obama’s safe gun proposals.

Republicans are afraid to show their hand and thus unable to govern. Ahead are fights over the debt ceiling, budget, Pacific Trade Partnership and maybe Obama’s all-too-quiet request for authority to send troops against ISIS. Not even the wily McConnell knows what to do, so he waits on courts and writes letters asking others to lead.

Things don’t look a lot better for Republicans outside Congress. Once they could count on their governors to be safe and bland, but the far right has its mitts into state houses now, so Indiana may not be their last state-sponsored fiasco. Then there’s the presidential race. In Jeb Bush and John Kasich they have two real contenders. That may be one more than Democrats produce. But the din arising from the rest of their insane clown posse—Cruz, Trump, Ben Carson et al--may drown them out.

If anyone told me in 2010 that in 2015 the Tea Party would have Congress in a chokehold, I wouldn’t have believed it. At the least I’d have thought Democrats would be on the cusp of throwing them out. They aren’t. Even assuming Hillary Clinton emerges from the primaries victorious, Democrats will likely find themselves fighting in 2016 only for a share of a divided government.

How could it be? How could Republicans make such a sad spectacle of Congress, lose every issue in every poll by such huge margins, yet run so close in the race for president -- and hold the upper hand in the battle to control Congress? Some blame the system's corruption by big money. Others blame voters for being lazy, gullible, ignorant or reactionary. The money is awful and we’re all flawed but we can only hope these analyses are false, as they lead nowhere. If you want to know why Democrats are in a dead heat with a gaggle of extremists, look at what they’ve been up to lately.

It used to be Republicans rose quietly and by consensus, or at least seemed to, while Democrats squabbled over every party perch. Now Republican presidential races are brawls and fights for their House leadership posts are truly vicious. That Democrats can’t even decide whether to have a contest for their 2016 presidential nomination testifies both to Hillary Clinton’s strength and the party’s weakness.

When Harry Reid announced that he’d retire from the Senate in 2016, the race to succeed him lasted at most a few hours and was held entirely in the mind of Sen. Dick Durbin. In the wee hours of the next morning, he conceded to Schumer. For the second time in four months, Democrats picked a Senate leader without a fight -- or even a discussion. In December, after suffering an historic loss, Democrats in both houses reelected all their leaders by voice vote and without opposition. Whatever they may disagree on, Democrats in Congress stand united in the conviction that their leaders are all doing a terrific job.

Schumer’s elevation was a big hit around town, as can be seen in a piece by the Washington Post’s Dana Milbank with the actual title of ‘Why Harry Reid’s likely successor Chuck Schumer is exactly who Democrats need.’  Milbank calls Schumer’s rise “a welcome development for a Democratic Party sorely in need of a competent strategist…” Milbank scolds the White House for “felony message bungling” and lauds Schumer for setting up a “campaign-style war room’’ after the Democrats 2010 defeat, to coordinate message and “find themes that would unify the caucus.”

Milbank strongly implies that Schumer’s stewardship of the Democrats’ message over these last four years was a big success, though it’s hard to see why anyone would think so. Exactly what was that message? Milbank also neglects to cite Schumer’s status as the Senate Democrats’ premier fundraiser, though he does note that he has been “justifiably accused of being too close to Wall Street’ while also noting that it didn’t stop him from encouraging Elizabeth Warren to run for the Senate.  To Milbank it all proves that “ideology means less to Schumer than winning,” which in Washington is high praise indeed.

High-dollar fundraising is now the preferred path to Democratic advancement in Congress. Over a generation the party’s relations with Wall Street were slowly transformed until Barack Obama in 2008 became the first Democratic candidate for president to outraise his Republican opponent there. Nothing that has happened to or within the party has had so much impact on its policy and message. Schumer is one of three men, the others being Tony Coelho and Rahm Emanuel, who made the marriage, and made it work. Today he is its chief guardian and the enforcer of its contract. It is in this role--  and not as the founder of some vague message operation -- that he has influenced the direction of his party. His influence has been profound.

After the last election Schumer offered up his opinions as to why his party had lost and what it ought to do next. Two points stood out. First, that Obama had made a serious blunder in tackling health care ahead of the economy; second, that Democrats should embrace government and that, "The 2014 election was not a repudiation of government in general," but "just another sign of a deep frustration that government is not doing enough to fix our country's problems."

Schumer said health care only affected 5 percent of the electorate and that what people cared about was jobs. It was an odd analysis. The uninsured alone were 15 percent of the population. People paying more than they could afford for less coverage than they need were another 20 percent.  No other initiative could come close to helping so many people. Doing the economy first meant never doing health care at all. Nor could we ever fix our economy without fixing its broken institutions, of which the health care sector was the biggest and most broken of all.

Obama shouldn’t have delayed health care; he should have done it right. He should have defended the public option and not cut a deal guaranteeing a parasitical insurance industry the right to go on skimming forever. Some say he had no choice. I believe otherwise, but certainly his task was made harder by his party’s relations with the finance and insurance sectors.

2014 was indeed “a repudiation of government in general” by a public sickened by the sight of its corruption. People are furious, which is why ‘big government’ is still the Republicans’ favorite trope and why so many people who back Democrats on so many issues still vote Republican. As the Democrats’ ambassador to global finance capital, Schumer isn’t apt to see that either.

Schumer has always struck me as a decent man. Save for the outsized financial connections, he's like most other Democrats: You can count on him to support civil rights, Keynesian economics and a social safety net for the old and poor. These aren't small things. What you can't count on him for it the kind of reform that alone can lead us back to broad prosperity -- and ahead to democratic renewal and the just distribution of power and opportunity.

The week saw another Democratic senator get closer to a big career move. On Wednesday federal prosecutors charged New Jersey’s Robert Menendez with 22 counts of bribery and corruption. Menendez expressed “outrage” at the charges and vowed to fight to the end. The indictment is a litany of lavish gifts—trips on private jets to opulent villas—huge political contributions and undeserved favors. Menendez says there was no quid pro-quo, and thus no crime. Our ethics laws reward the clever rather than the good and he may fool a jury but don’t bet on it.

What’s most offensive is that Menendez could ever think that what he did wasn’t wrong. In effect, he argues that his conduct amounts to the ‘soft corruption’ memorialized by Justice Anthony Kennedy in Citizens United. That he may actually believe it attests to the utter corruption of the political culture he inhabits.

On Monday, Elizabeth Warren did a long interview on public radio. Sounding to my ear somewhat scripted she measured out a few kind words for Hillary and heaped praise on Schumer. She was in a tough spot, yes, but her performance reminded me how unlikely it is that the system will change from within and of how much we need a strong, independent progressive movement to be the engine of reform.

Schumer’s up for reelection in 2016. It would be great if he got a primary before he got a promotion. (Zephyr Teachout would be an ideal candidate.) The Democrats don’t need a new theme or more money. They need to reclaim their heritage and so reestablish the moral authority of government. They’ll only do it if we force them to. I know what’s stopping them. What’s stopping us?