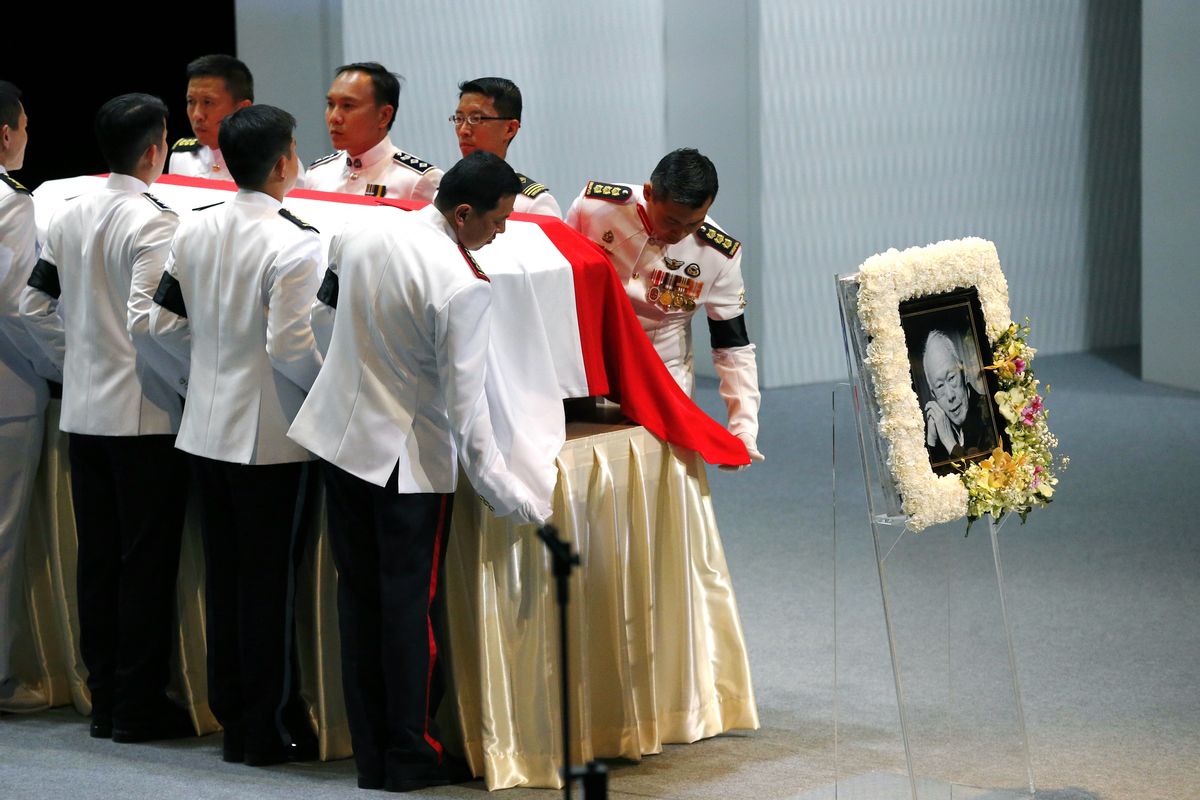 Pallbearers adjust the national flag of Singapore covering the coffin of the late Lee Kuan Yew during a state funeral held at the University Cultural Center, Sunday, March 29, 2015, in Singapore. During a week of national mourning that began Monday after Lee's death at age 91, some 450,000 people queued for hours for a glimpse of Lee's coffin at Parliament House. A million people visited tribute sites at community centers across the island and leaders and dignitaries from more than two dozen countries attended the state funeral. (AP Photo/Wong Maye-E) (Wong Maye-e)
--

Pall bearers in Singapore adjusted the national flag covering the coffin of the country's founding prime minister, Lee Kuan Yew, at the state funeral service last week. Nearly half a million people queued for hours for a glimpse of his coffin at Parliament House.

Christians across Asia remembered Good Friday, the day of Jesus' crucifixion, with services, rituals and re-enactments, including one in the northern Philippines in which believers flagellate themselves, a ritual that is frowned on by church leaders.

More than 300 enslaved fishermen, mostly from Myanmar, were freed Saturday from a remote Indonesian island after an Associated Press report revealed their plight. The story prompted Indonesian officials to visit the island to investigate abuses and they offered to evacuate the fishermen.

In Kashmir, relatives wailed during a funeral procession for loved ones who died in a landslide caused by heavy rains, while Mount Sinabung, one of Indonesia's 130 active volcanoes, released ash and pyroclastic flows.

Cherry trees were in full bloom last week in Tokyo, where a sparrow drank nectar from a blossom.

In the world of sports, Australian teammates celebrated after defeating New Zealand by seven wickets to win the Cricket World Cup final, while driver Sebastian Vettel of Germany jumped for joy after winning the Malaysian Formula One Grand Prix.