An off-screen death casts a shadow over "Severance," the final season premiere 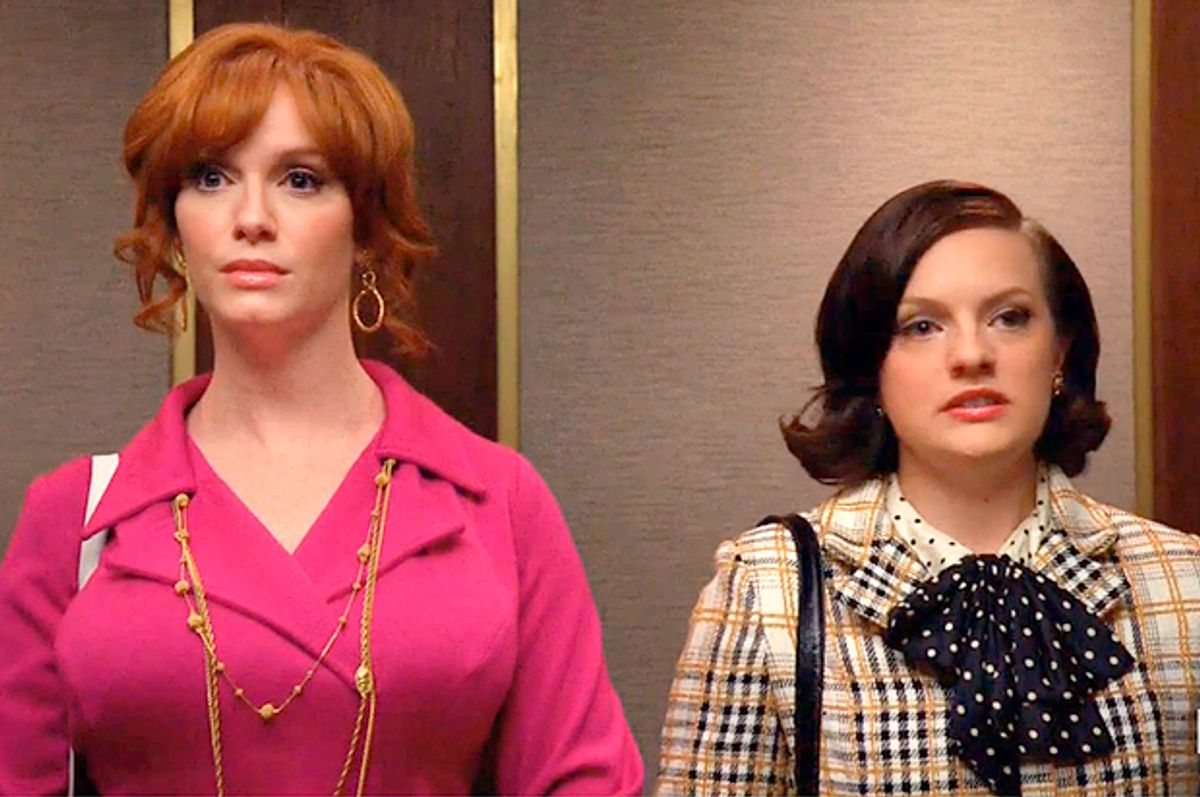 “Severance” is an aptly titled episode. The biggest reveal of last night’s “Mad Men” is that Rachel Katz nee Menken, one of Don Draper’s most brightly burning old flames, died off-screen of leukemia just a week prior. Often, when a show disposes of a character out of the audience’s sight, it’s because of some practical consideration that would prevent the event from making it to screen: expensive to shoot, actors busy, not enough time to make it work.

That’s clearly not the case in “Severance.” As lovely as Maggie Siff’s cameo is, when she walks into the closed-door office of Don’s subconscious wearing only a fur coat, there’s a part of me that wonders if Matthew Weiner (creator, showrunner and writer of this episode) had Siff wander in just so the audience knew that if he’d wanted us to, we could have seen Rachel Katz’s last days on earth. This is not a practically planned off-screen TV death, this is full-blown, twist-of-the-knife creative vision. The audience, and Don, will be denied seeing Rachel in life ever again.

Her death comes in an episode that is consciously overstuffed with beautiful women—Don is casting models for moisturizer. The cold open is just Don speaking to a naked woman wearing a fur coat, and it sounds like he’s coaxing her to have sex with him before the camera pans back to show us the couch, occupied by a few slavering account executives. It’s self-consciously erotic—on the part of Don, on the part of the model looking to sell moisturizer, and on the part of the show itself, which is eager to hoodwink us into believing it’s sex. Hardly unbelievable—we’ve certainly seen him work his magic before, and the episode pays close attention to her mouth, her naked body, and his fixed gaze on her. But then, that’s advertising: Push the buttons for one human desire, Pavlov-style, and then swap in a cheaper, far less fulfilling substitute.

But the few models we see are All-American, tanned sweethearts, the spitting image of some platonic ideal of a California girl. Rachel is nothing like them, physically—short and pale, with almost-black hair. Even with the fur coat on, she looks modest, maybe even matronly. She’s out of place in this parade of women, both the very real one coming through Sterling Cooper & Partners’ front doors and the less literal parade of women in Don’s bed. Case in point: The waitress at the diner. Don’s sitting next to one model and across from two others, and his eye strays to the brunette taking their order, who is reading John Dos Passos’ U.S.A. trilogy. Similarly dark-haired, similarly modest, similarly uninterested in Don’s stories, even if they are about his real childhood growing up in a brothel. The waitress reminds Don of someone, but he can’t articulate exactly whom: It’s more that he recognizes something in her, and is trying to find a way to connect to it.

For narrative cohesion, the waitress that Don sees should remind him of Rachel, specifically. To my mind, though, she looked more like another one of his season-one paramours, Midge. (It is remarkable that Elizabeth Reaser, who plays the waitress, is so physically similar to both Rosemarie DeWitt and Maggie Siff, enough that she could pull off looking like one or both of them.) Either way, it suffuses “Severance” with an icy blast from the past (Midge, we discovered a few seasons ago, became a pretty desperate heroin addict). It’s particularly bitter, for Don, when he realizes that the waitress was only responding to his overtures because of Roger’s ostentatiously large tip (he throws down a hundred-dollar bill for a check amounting to something like $12). There’s that Pavlovian lesson from advertising again: Stimulate desire for connection, and then swap it out with the cold business of transaction. All the more accurate that they’re fumbling almost blind in the dark.

Rachel Menken has long been my favorite of Don’s partners, and Matthew Weiner shares a similar soft spot for her. Speaking to Matt Zoller Seitz at the Jewish Institute, Weiner spoke about how Rachel, as his first Jewish character on the show, embodied a lot of the influences of his own sense of history that he brought to bear on “Mad Men.” She’s more like Don than any of his other partners—both just “one generation away from living without plumbing,” as he put it, desperately running away from a past toward a dimly imagined future that explicitly doesn’t have a place for people like them.

But also—because she was so singular—she didn’t put up with any of Don’s crap, either. That cold open is so extraordinarily telling, because of how much it tells us about Don and Rachel without outright stating anything at all. It feels erotic, because by this point, the audience knows what Don’s like when he’s trying to get someone to sleep with him. He’s swayed by his own illusion of control, fixated on telling his lovers what to do, and how he wants them to do it. As Betty’s husband, he was commanding and demanding; as Sylvia’s sidepiece, he ordered her to stay in a hotel room, naked and aroused, while he went to work. Rachel was a rare flame who, for him, defied that command; she was charmed by him, as everyone is, but not swayed. She was his first lover that we met who discarded him, instead of the other way around—she saw through him, and loved him anyway, at least for a little while.

“Severance” is positioning itself for the weighty role of bringing the show to an ending—it’s called “Severance,” after all, and the missed-connection atmosphere that pervades the episode is just as much about us learning to leave behind “Mad Men” as it is about Don feeling that he accidentally misplaced Rachel and didn’t find her until a week too late. The episode is set all the way in April 1970 (which we know because of that Nixon speech Don’s watching in his apartment)—a time that feels space-age, compared to 1961. Like so much of “Mad Men,” it has the period grace notes that we’ve come to expect (mustaches and a booty-call answering service) and the character sketches that will be brought to full force later, once the hilarious internecine skirmishes settle. (Ken’s story this episode was purely heartwarming, wasn’t it?) There’s also more to be said about the women of SC&P—Peggy, Joan and the many secretaries who fill the halls—who seem to be at or approaching a crossroads. Joan seems to swell with rage during a particularly awful fit of misogyny, and Peggy almost takes an overnight trip to Paris on a whim with Mathis’ brother-in-law Stevie (played by Devon Gummersall). (Think about how differently both characters would have handled those scenarios in Season 1 of this show.)

But when I think back on this episode, I’m drawn to a moment Don shared with Rachel’s sister Barbara, when he came to pay his respects to the deceased. At first, it looks like maybe Don went to the party at Ted Chaough’s place, because that’s what’s being discussed right before. But that the room is quiet, and the hall mirror is covered, and the occupants are wearing somber colors. This is mourning, and this is Rachel’s family sitting shiva. Barbara is openly displeased to see Don there—firmly telling twice-divorced, pathetic Don that Rachel lived the life she wanted to, start to finish. Don can see Rachel’s children on the couch; he doesn’t even know how she died, and when the answer comes to him—leukemia—it underscores even more how little he really knew this woman who would from time to time wander through his dreams.

And he’s absolutely stricken. Jon Hamm brings the full force of his talent as Don Draper to bear in the moment, vacillating between hoping for a shred of evidence that Rachel ever thought about him again before her death and praying that she really was happy. It’s possibly the most vulnerable he’s been on the show, responding to mingled criticisms and sadness with nothing except pathos.

He is holding a small pink box. Weiner called Don a “hero of assimilation” in that same talk at the Jewish Institute, a man whose superpower isn’t really advertising, it’s becoming; when he solves Joan’s L’eggs/Topaz crisis, it’s as much about brilliance and business as it is that he can be whatever someone needs most in that moment. He’s good at rising to the occasion. And he has learned this whole world from the outside in—running, as he has, from a world without plumbing to a world where he creates the mythos of plumbing for the entire planet. He observes convention in a way that is different from the rest of us—not just in a way that indicates compliance, but in a way that indicates literal observation. Don has watched us all, and seen how we work, and his greatest lesson of the last decade of his life has been learning how to let other people see him back.

So when Barbara explains sitting shiva to him, he cuts her off. He’s lived in New York a long time, he says. He’s familiar with the process. And oh yes, the box. He brought cake.