My road to hell was paved with Xanax (and Klonopin, and Ativan, and Halcion)

The pills were a release from my crushing anxiety. But the more I took, the more I struggled with a new pain 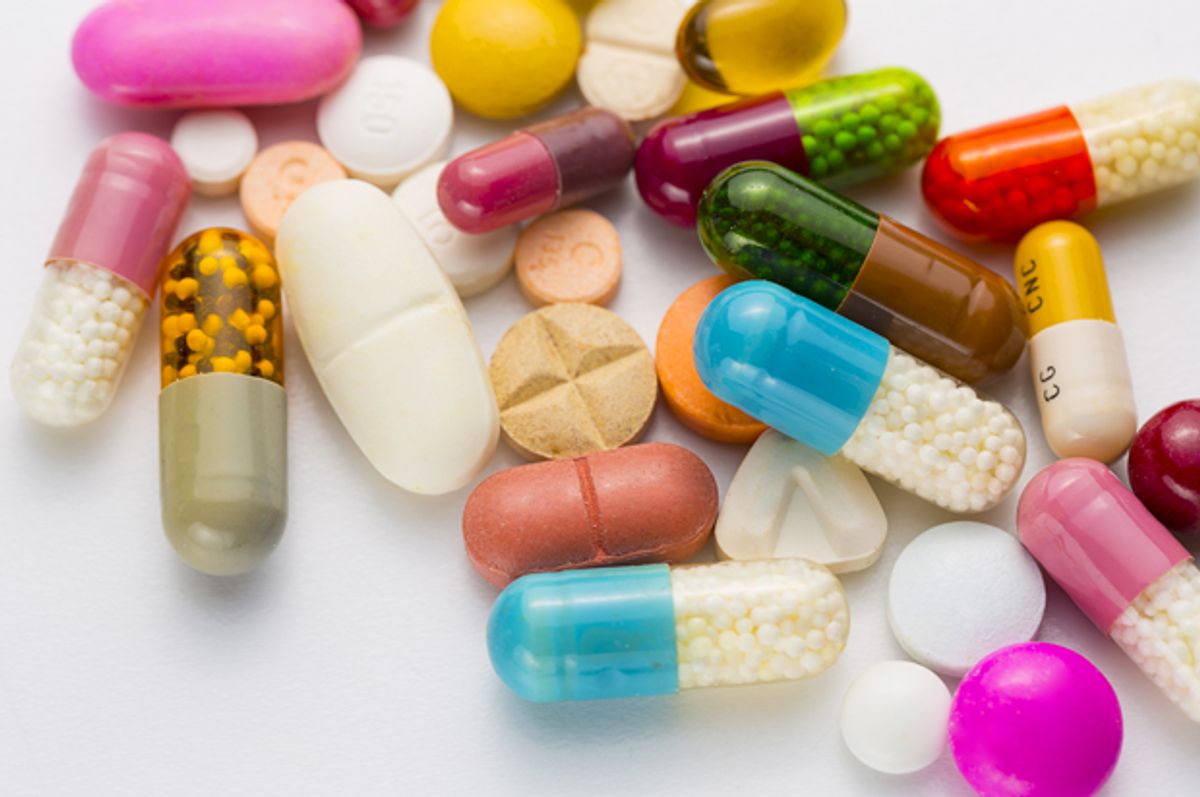 I guess you know you have a problem when you're snorting crushed Xanax up your nose through a plastic tampon applicator before going grocery shopping because you can’t stay sober long enough to grab some more cereal at 2 p.m. on a Wednesday. Not like you can afford the cereal anyway -- your bank statement reads “$0.00” in bold letters, which is also how exciting your life is on a scale of 0-10. But when you sell everything you own to buy drugs, going as far as raiding your parents' home for childhood books (a 64-book Nancy Drew collection sells nicely on Amazon for more than $300), there isn’t much thrill to look forward to except an impending nosebleed from the pills lodged up your nostrils and another destructive fight with your then-boyfriend, who is just as fucked up as you are and hates your guts. Nosebleeds are awfully exciting when you spend the majority of your time in a pill-fueled daze.

They say drugs fill a void, or at least that's what my therapist thinks. The first time I popped a Xanax was the first time I felt relief from my anxiety disorder. I would spend all day thinking about anxiety, which gave me even more anxiety, and all night staring at the ceiling and wondering if I’d die in my sleep from anxiety. I never died in my sleep from anxiety, but it didn’t stop anxiety from being the worst thing on earth. There was something oddly comforting about Xanax—the way it came in many shapes and colors, like peach and blue. I enjoyed looking at the pills. They were a pretty little assortment of happiness I could feel just by holding in my hands. Although Xanax put a temporary stop to my agony, it soon introduced a new kind.

“Why don’t you spend the night, Ashley?” a date once asked at 4 a.m. I had recently broken up with my boyfriend and my pill consumption was at an all-time high. I couldn’t go 24 hours without them. “Are you seriously going to drive all the way home?”

Yes, I’m going to drive all the way home because I don’t have my pills and I can’t sleep without them and I don’t want to stare at your ceiling all night, plus I get sick if I don’t have benzodiazepines in my system after a certain amount of time. It’s not worth shaking violently and probably vomiting all over your sink.

“I just like sleeping in my own bed,” I lied.

Truth is, I want nothing more than to sleep in your bed but I can’t, and I don’t think you’ll like me if I tell you the real reason why.

The Rolling Stones’ “Beggars Banquet” and “Let It Bleed” were the soundtracks to my addictions. I’d play the two records over and over, downing pills with a bottle of wine. Sometimes I’d get so high that the record would skip for an hour and I wouldn’t even notice. In rare moments of hopefulness, I’d listen to Fleetwood Mac’s “Rumours.” I found Fleetwood Mac, especially Stevie Nicks, to be highly inspirational when nothing in my own life inspired me. Nicks conquered a Klonopin addiction, and though she didn’t write “Don’t Stop” (Christine McVie did), the lyrics convinced me, however temporarily, that maybe one day I could conquer my own addiction, too. I’d play the song over and over, dreaming of a day with no anxiety and no pills.

David Carr wrote in “The Night of the Gun,” “Drugs, it seems to me, do not conjure demons; they reveal them.” I was manipulative, cunning and selfish. I learned how to lie through my teeth so well that lying to get what I wanted (drugs, mostly) became as natural as breathing. I stole from stores and pawned jewelry for drug money. When I disappeared into the deeper holes of my addiction, I told my friends and family I was sick and couldn’t leave the house, but in reality, I had passed out in the bathtub high.

Even when I forced myself to go out, I still felt so alone. It’s incredible how lonely the road of addiction can be, especially when you’re surrounded by people who love you. Addicts are always alone on the inside, but perhaps the loneliest part of all is feeling like the drugs are your only friends when your real friends are sitting at your side staring at you and wondering why you won’t say a word. It’s kind of hard to talk when you’re that far gone.

I’d often look at myself in the mirror and not recognize the girl with the blank stare looking back. When I tried to scrub away the black underneath my eyes only to realize it wasn’t leftover mascara, I broke down in tears. I was always crying. Pills have this weird side effect not listed on the bottle where they stop you from caring about brushing your hair, or caring about work, or caring to remember to call your grandparents. The zombie-like feeling that goes hand in hand with popping a pill eventually transitions into your personality, and it no longer becomes a euphoric rush but a necessity to survive, to even exist, to even be yourself. I felt dead on the inside.

How do you know when you’ve hit rock bottom? Maybe it’s the day you finally realize your life is a disaster. I thought about the morning after a Xanax party when I woke up with my face smashed in, phone gone, wearing clothes that weren’t mine, and the time I snorted Benadryl in a desperate attempt to get high when I ran out of Klonopin, and the day I ditched a family party to try to score heroin, trying to figure out which moment was actually rock bottom. I thought about my 20th birthday dinner when my eyes rolled back into my head after swallowing a bag full of pills, and the many afternoons I spent leaning over a friend’s kitchen counter smoking oxycodone through a piece of tinfoil. Maybe addiction is one long rock bottom.

I’m six months sober from pills. It took an entire 14 months and two relapses to get clean from six years of addiction and heavy pill use. My therapist told me benzodiazepine addictions are harder to kick than heroin and cocaine addictions combined, but any kind of addiction will squeeze out every last ounce of your soul. She told me a lot of things, though, like how I wasn’t crazy when I didn’t sleep for 28 nights straight going through withdrawals after stopping pills cold turkey the first time I tried to get clean. I’ll never forget those 28 nights. I thought I was bionic for being able to stay awake so long.

During one of my nastier withdrawals, I knocked over a glass of orange juice and cried hysterically on my mother’s shoulder, begging her to make my hands stop shaking. I felt like I was crawling out of my own skin. I’m still not sure how to describe the sensation, but it’s a most uncomfortable feeling, like your soul trying desperately to wrench itself from your body. I drew a picture of how I felt that day: A hand clutching an exploding heart surrounded by a ticking time bomb.

Stevie Nicks said getting clean from her Klonopin addiction was like somebody opening up a door and pushing her into hell, but what she forgot to mention is that getting clean from a Klonopin (in my case, Klonopin, Xanax, Ambien, Ativan and Halcion) addiction is like somebody opening up a door, pushing you into hell, locking you in, and throwing away the key with a smirk. You become disassociated from everything real, tinkering on the edge of insanity as depression and anxiety creep up behind you and dare to push you over the edge.

I don’t like to use the term “recovering addict,” because there’s no such thing. My addiction will always be a part of my life, even when I’m winning. Days go by when I don’t think about my addiction, but other days, it weighs heavy on my mind, especially on sleepless nights. An addiction is like a bag over your head: Even though it’s there, you don’t always feel it, yet other times, it tightens and you’re suffocating and you can’t breathe, and all you want to do is rip the bag off of your head but you can’t undo the knot.

Sometimes I wonder if people know I’m an addict. I wonder if passersby can see through my skull and sense the turmoil my brain undergoes as it adjusts to a non-benzo-addled existence. I know I’m shaking on the inside, but does it show on the outside? I want them to understand so badly, but I'm afraid they won't.

Maybe the understanding starts with me.