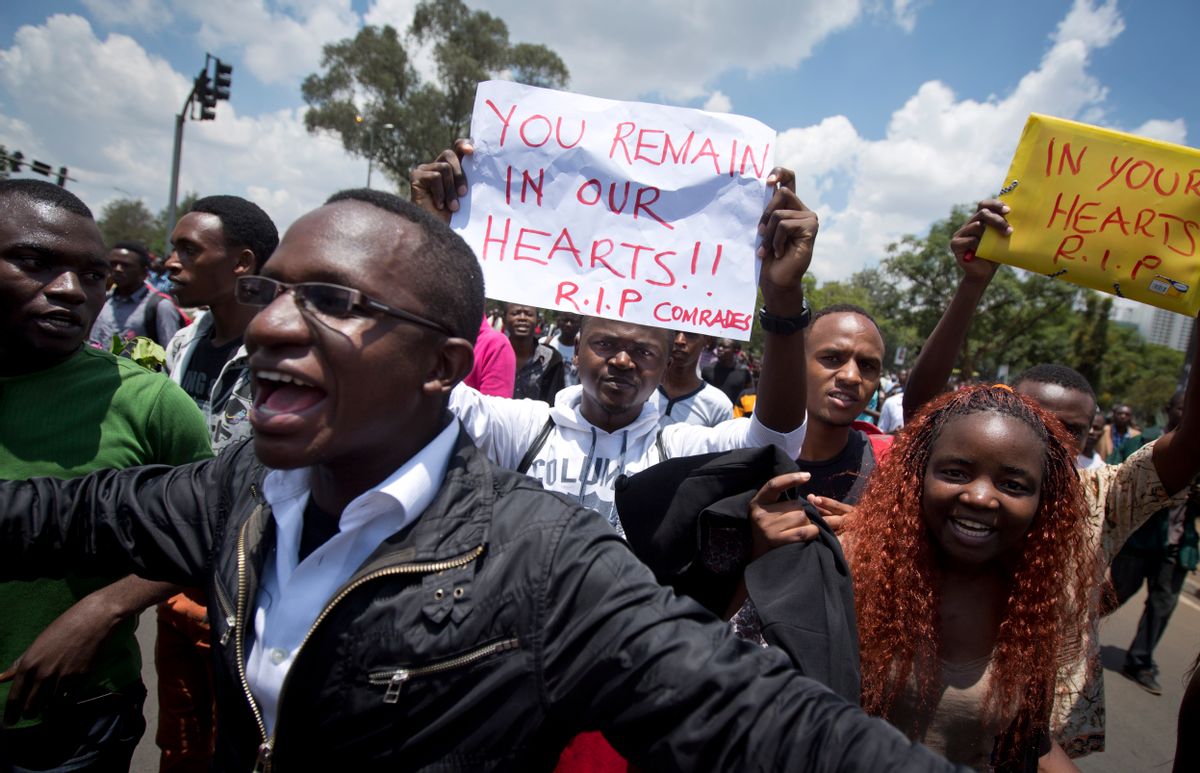 Kenyan students, some wearing black to represent mourning, march in memory of the victims of the Garissa college attack and to protest what they say is a lack of security, in downtown Nairobi, Kenya Tuesday, April 7, 2015. Hundreds of Kenyan students marched through downtown Nairobi on Tuesday to honor those who died in the attack on a college by Islamic militants and to press the government for better security in the wake of the slaughter. (AP Photo/Ben Curtis) (AP)
--

1. WHO'S MAKING CASE FOR DEAL WITH TEHRAN

Obama defends an emerging agreement by noting Iran would be kept a year away from obtaining a nuclear weapon for more than a decade.

2. KENYAN STUDENTS DEMONSTRATE TO HONOR THOSE KILLED IN ATTACK

The raucous crowd of about 250 jogged down main thoroughfares in the capital, sometimes blocking intersections and attracting bystanders.

3. WHOSE CAREER IS BLEMISHED BY ROLLING STONE STORY

The article about an apparently fictional gang rape at the University of Virginia is a rare demerit for freelance journalist Sabrina Rubin Erdely.

The tea party favorite will begin his White House campaign today, kicking off the run with a rally in downtown Louisville.

Forensic teams in the liberated city of Tikrit exhume at least 12 bodies from the burial site believed to contain hundreds of soldiers killed by Islamic State militants last year.

The deceased, who were identified as an adult and seven young people ages 6 to the teens, were using a generator after the power company cut off electricity in their Maryland home.

7. CALIFORNIA PRESSURED TO STEP UP TO SLASH WATER USE

The State Water Resources Control Board will start discussing how to enforce the reduction, which will likely include cutback targets for cities.

Both sides have 90 minutes today to make their case to the jury. The lawyer of the former New England Patriots star tight end will go first, followed by the prosecution.

Christie's says the singer-songwriter is selling 16 pages that include the original working manuscript and typed drafts of the song.

Led by Tyus Jones and Jahlil Okafor, the Blue Devils play like veterans down the stretch, outscoring the Badgers by 14 points over the final 13 minutes.