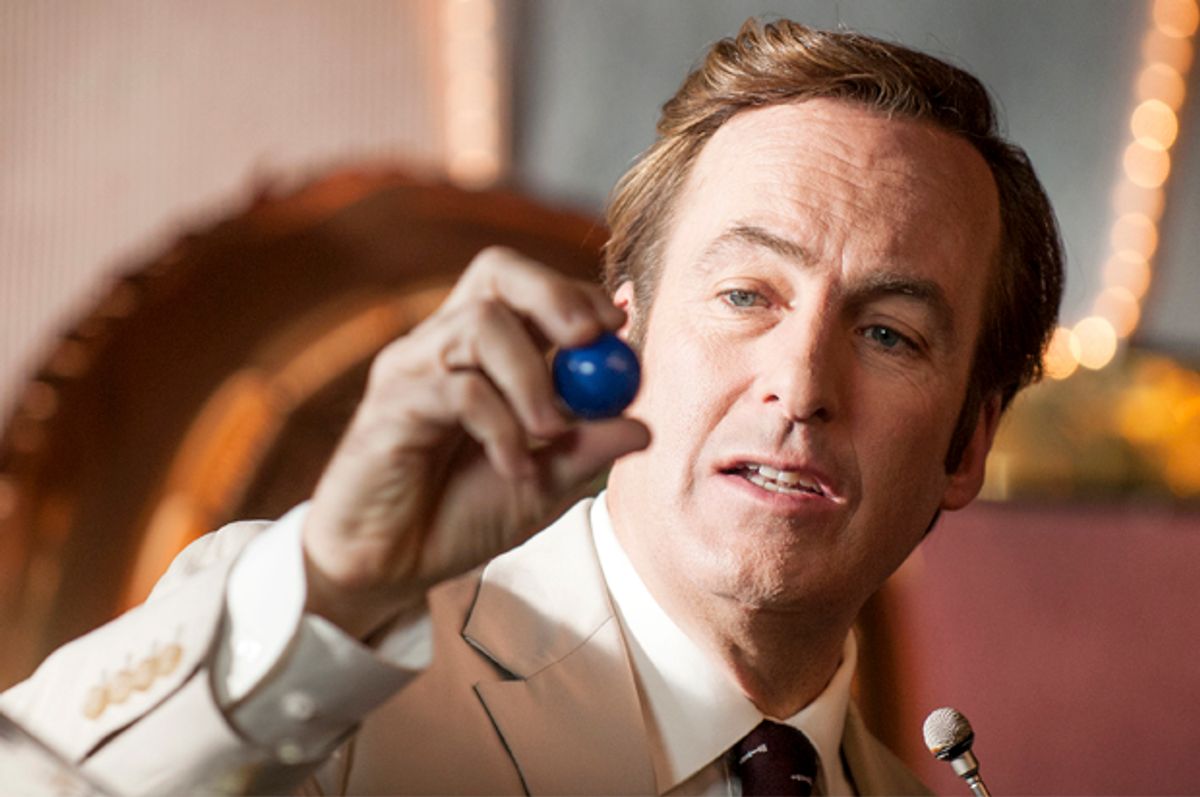 “Better Call Saul” would be aptly subtitled, “a brief history of things a man has kicked out of anger in his life.” In the first episode of the AMC drama down-on-his-luck lawyer Jimmy McGill (Bob Odenkirk) sets upon first a trash can and then a skateboarder, kicking them mostly for being in the wrong place at the wrong time. In later episodes, he kicks, with futility, a closed door in an office space he’ll never rent, and a dumpster that he was occupying when two security guards deposited bags of used adult diapers in it. It’s not just one kick, or two—the McGill kick is an assault, a barrage of pent-up anger directed at an inconveniently placed obstacle.

At first blush, it’s just good old-fashioned physical comedy—a nod to what creators Vince Gilligan and Peter Gould first conceived of for “Better Call Saul,” a half-hour situational comedy. Bob Odenkirk throws himself into the physical convulsions of kicking with gusto; Jimmy’s outsize, futile violence reads less like the casual savagery of a brooding antihero and more like Elmer Fudd thwarted from his pursuit of Bugs Bunny. It’s pure id, but it’s harmless—a child strapped into a car seat having a tantrum. Jimmy is not an object of fear.

“Better Call Saul” is a weird little show—one of those rare spinoffs that has found a purpose and vision that is distinct enough from its parent show while being distantly related to it. If anything, “Breaking Bad” is more like the rest of TV than “Better Call Saul” is—the spinoff meanders without eye-catching violence or the grounding elements of a workplace, a family, or an immediate situational narrative. “Better Call Saul” is a less driven show, one that plays its cards very close to the chest. In “Breaking Bad,” the audience knew most of Walter White’s story from the start, and could situate him into the settings and social units presented. In “Better Call Saul,” the protagonist is just as much of an enigma to us as anyone else in the story. No one is quite what they seem in “Better Call Saul,” and everyone lies all the time.

That is because it’s a show about con men and lawyers—professional liars, one and all. And they’re so good at lying that half the time, they’re lying to not just those they love most—like, oh, brothers—but themselves, too. Jimmy is the Miles Davis of con men, as his former buddy Marco tells him in Chicago. He’s the best in the game. Hence, the tantrums: Moments of unchecked emotion in a life that is otherwise fully, obsessively, necessarily unruffled.

It’s really in the last half of this debut season that “Better Call Saul” has found itself. Before that, the show was a mood-piece designed for fans of “Breaking Bad”—the faces and landscapes were familiar, but reconfigured; the plots were vaguely justified but meticulously detailed, creating a scattered palette of rich snapshots. Even the fan-favorite episode “Five-O,” which dealt almost entirely with Mike Ehrmantraut (Jonathan Banks)’s backstory, was yet another lovely vignette that didn’t quite fit into the whole. It was only when Jimmy stumbled into the multi-episode arc of fraudulent elder care that the show began to find itself—not because elder care is so fascinating, per se, but because the story gave Jimmy a purpose and a conflict. Purpose, to crack the case, borne out of a real desire to help people. And conflict, because his sudden interest and success ruffles the electrosensitive feathers of his older brother, Chuck (Michael McKean) that ultimately leads, in the ninth episode “Pimento,” to the revelation that it’s Chuck blacklisting Jimmy from advancing at HHM; it’s Chuck that is pretending to get along with Jimmy while pulling strings behind Jimmy’s back. Speaking to my colleague Anna Silman, McKean offered some fascinating character analysis on the relationship between Chuck and Jimmy: Chuck was, in all likelihood, the one their mother was always proud of. But Jimmy was probably the one that made her laugh:

Well, one thing is that [Jimmy] has the sense of humor. He can take a situation that’s dire or perhaps just an iffy situation and do a joke on it. We see him do it in the show, when he’s out in the desert with those guys who are getting their legs broken. We still see him trying to look for the joke, trying to keep it cool. He’s the one who made mom laugh, that’s what we’re thinking now. That’s the worse crime of all. I made my mother very proud, but Jimmy made her laugh. That kills me.

“Marco,” last night’s finale, reveals more about Jimmy McGill—the man who becomes Saul Goodman—than we’ve ever known before. It comes almost entirely from Jimmy himself, standing up in front of a crowd, performing as he does so well. Except it’s not a jury, or a judge, or potential clients he’s grandstanding for. It’s the crowd at the Sandpiper, the senior citizens’ home, and as he so often does, he’s calling bingo. This time, it’s after he’s capitulated to his brother’s machinations and accepted his check for, essentially, getting the hell out of HHM. For some fluke of a reason, the machine keeps spitting up Bs—B-12. B-4. B-6. And the repetition, despite the system that is supposed to enforce random chance, sends Jimmy off on a confessional monologue. He’s always coming up empty-handed, in this world, no matter what he does; at least, in this moment, he is going to yell about it.

What’s interesting, given all of this talk about Jimmy’s inherent comedic value—both as a comedian and as an object of humor—Jimmy’s breakdown looks and feels like a stand-up act. The story is comical, too: Jimmy ended up in Albuquerque because his brother made them move because Jimmy almost went to prison for defecating through a guy he didn’t like’s sunroof onto, as it turns out, the two kids that were sitting in the backseat. But it’s not funny, it’s tragic; it’s stand-up, but it’s an act that is bombing. Comedy works best when you’re not worried for the joke-teller. In “Marco,” Jimmy loses that Teflon-coolness that lets him joke while staring death in the face. He’s facing something a lot more worrisome—pointlessness.

What’s been most remarkable about the Jimmy McGill of this season—who will turn into, eventually, the Saul Goodman of “Breaking Bad”—is that Jimmy is trying, so much of the time, to do the right thing. He tries to do right by Chuck. He tries to do right by Kim. He tries to do right by the senior home residents. There’s a lot of reckoning of perceived “owing” in Jimmy’s world, because fairness—justice, in its most primitive form—matters deeply to him. It’s either “you owe me” or “we’re square” or “do me a favor,” day in and day out.

Emily Nussbaum notes rightly in her review of the first season that “Better Call Saul” is about performing masculinity—and Jimmy just happens to know intimately how theatrical it is. But what I saw in the first season was a man trying to be good and failing, all the time, on the road to giving up on doing right by anyone, ever again. In “Better Call Saul,” Jimmy has the buoyancy of his sense of humor to get him through the worst dumpster-kickings and foot-door collisions. Jimmy seems to believe in the general goodness of people and things; he seems to believe that by doing a good deed, he’ll be making himself happier. But Jimmy won’t be Jimmy for much longer. And Saul, as we know already, is a cynical, one-lining shyster. But he does not have quite the same ability to make the world laugh.