Solidarity with Palestinians seems a logical cause for Kanye, but he and Kim are vacationing in Tel Aviv instead 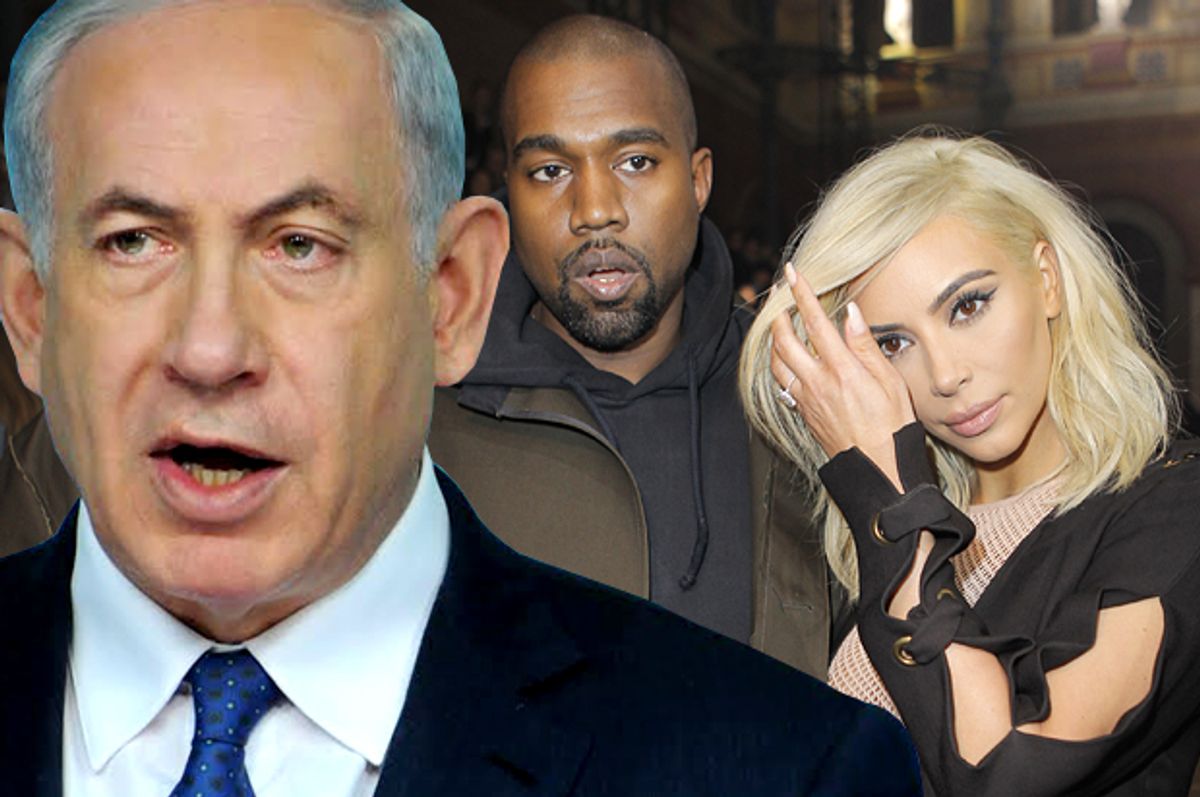 A future Palestinian rapper, perhaps one the age of Kanye’s daughter now, might eventually pen lyrics reminiscent of the deepest of Ye’s racially oriented rhymes, perhaps lyrics that call to mind West’s bitter account of mid-century racist abuse of his much beloved late mother on “New Slaves” or “Never Let Me Down.” Echoing the black struggle Kanye so often addresses, the Palestinian rapper might recollect his or her childhood when there were Israeli-only roads, Israeli-only neighborhoods, and Israeli-only schools in the middle of Palestinian land. A rapper from Gaza’s lyrics will likely be much more bleak and bloody.

The rapper from Ramallah or Gaza City might describe newly reelected Prime Minister Netanyahu like Jim Crow-era Alabama Gov. George Wallace, whose “Segregation Forever” speech was, in a way, echoed by Netanyahu when he declared that Palestinians would never be citizens on his watch, only subjects of the occupation. The popular, if divisive, leader stated in the days before his reelection that the Palestinian West Bank, militarily occupied in contravention of international law, would remain under military rule as long as he remains prime minister. There are no term limits on the prime ministership in Israel.

Kanye and Kim are visiting Israel in April, news that was celebrated with much fanfare in each of Israel’s biggest newspapers. “The Holy Land will soon be blessed” by the power couple, joked the Times of Israel. The papers report that the couple will visit Israeli holy sites and then head on to Jordan, effectively hopping over the occupied West Bank. Israeli papers also report that the Kardashians are purchasing a multimillion-dollar home in Tel Aviv, which is rumored to be shared by Kim and Kanye as a vacation home when the couple returns to Israel.

Kanye is probably the globe’s most important hip-hop artist at the moment, and his art, especially 2013’s "Yeezus," is intensely concerned with racism and oppression. Kanye has made himself a voice on racial matters, most famously by going renegade during a 2005 Hurricane Katrina telethon to angrily charge that “George Bush doesn’t care about black people.” President Bush cites Kanye’s off-script denunciation as the worst moment of his presidency. So while he’s not performing in Israel, Kanye is a leading voice on matters of race and oppression, and to visit and, at least by proxy, to invest in Israel is to validate and legitimize what many are increasingly likening to South African apartheid.

Former President Jimmy Carter famously lofted the charge of apartheid into mainstream discourse with his 2007 book "Palestine: Peace Not Apartheid." Likening the Israeli government to the apartheid government in South Africa has only increased with Netanyahu's latest inflammatory remarks. Even the New York Times editorial board, seen by many as friendly to Israel, was forced to call the prime minister's statements "racist."

America's most famous black intellectual, Cornel West, calls Gaza “the hood on steroids.” West continues, “[T]here is no doubt that for the Ferguson moment in America and the anti-occupation moment in the Israel-Palestinian struggle there is a very important connection to make and I think we should continue to make it.”

Even Kanye's longtime friend and collaborator--and former artist on Kanye’s record label--Yasiin Bey (FKA Mos Def) has referenced the Palestinian struggle a number of times on wax and denounced Israeli oppression. On “War,” Bey, like Cornel West, draws an analogy to the black struggle.

Kanye would not be alone in using his celebrity to call attention to the Israeli occupation of Palestinian territory. A growing BDS (boycott, divestment, sanction) movement calls upon artists and public figures to boycott Israel while the occupation persists, in coordination with divestment and sanctions to put economic pressure on the Israeli government. Two renowned black intellectuals, Angela Davis and Alice Walker, both speak out in favor of BDS, linking the Palestinian cause to the black American struggle and to the apartheid era in South Africa. Davis connects the Palestinian struggle to the U.S. prison-industrial complex, which Kanye angrily denounces on his hit “New Slaves.” Walker, in her open letter to Alicia Keys, recalls Jim Crow: “[Y]our elders who love you, boycotted institutions in the US South to end an American apartheid less lethal than Israel’s against the Palestinian people.”

Pink Floyd’s Roger Waters has been a leading figure among musicians to apply pressure to the occupying government. Writing for Salon, Waters described the BDS movement as “a nonviolent, citizen-led movement that is grounded in universal principles of human rights for all people.” Waters has convinced a number of musicians, including the likes of Stevie Wonder, to boycott Israel.

The BDS movement uses as its model the boycotts and divestment against the South African government and companies during the 1980s. In 1985, Steven Van Zandt of Bruce Springsteen’s E Street Band coordinated a star-studded boycott of apartheid South Africa with the hit “Sun City,” a song that led off with a who’s who of the era’s rap game: Run-DMC, Melle Mel, Afrika Bambaataa and Kurtis Blow, among others.

We’re still a little ways off from a potential “Sun City”-type effort vis-à-vis the Israeli occupation, but if anyone is gutsy enough to make a resolute stand against that theater of oppression it’s the man who handed President Bush his “all-time low” on live television, or the man whose affection for Beyoncé provided us with one of the most memorable moments in the history of award shows. Kanye does not, and has never, cared about your feelings; he cares about what he thinks is right. This is part of what makes him a genius. This is what makes his voice important. This is why he should boycott Israel as long as the occupation continues. Speaking just last month at the BET Honors show, Kanye delivered a powerful speech about the nature of black power in a world where black powerlessness still persists. He closed the speech with a rousing call to solidarity that is particularly apropos:

“Our power, our oil (since we don’t own any oil), our oil is our expression, is our influence. And when we have the chance to express it, and to influence, don’t only just do it for us--do it for the human race.”