March Madness and the NCAA purity lie: How the billion-dollar basketball-industrial complex blinds us to our biggest flaws 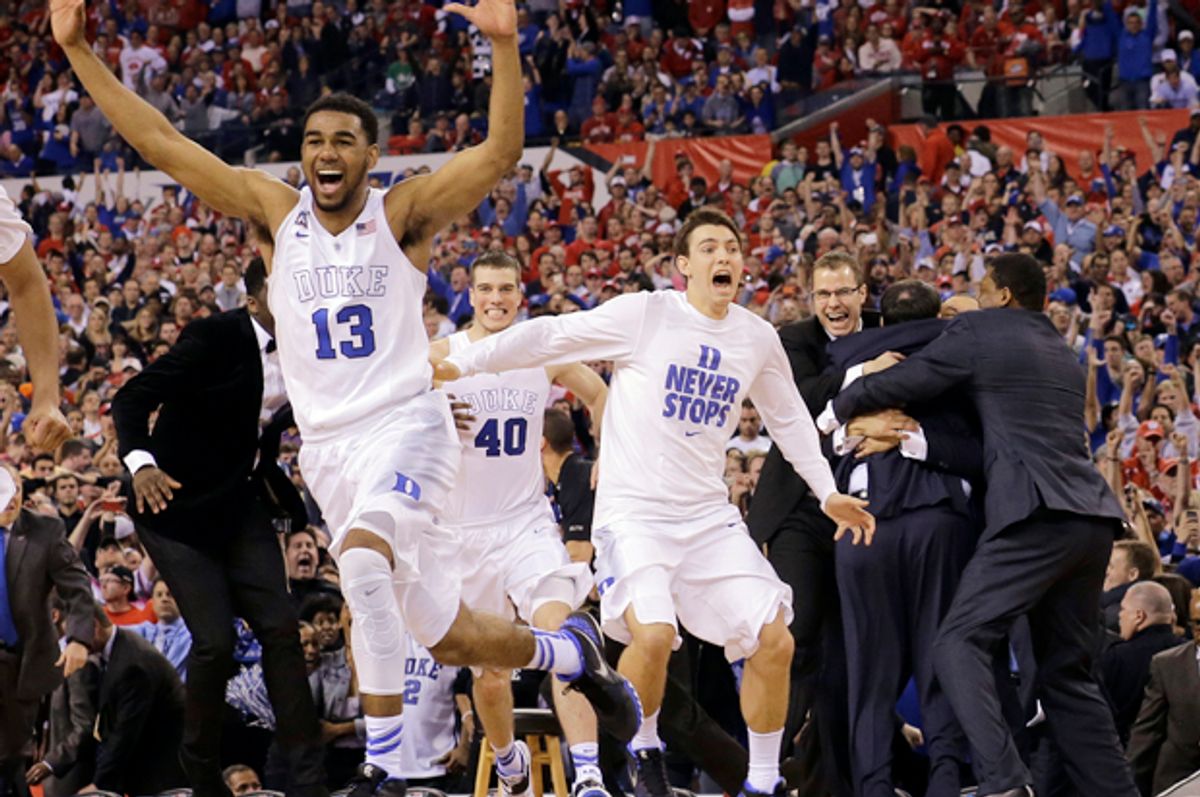 In a nation split by partisan bickering, one of the few documents that both liberals and conservatives await with genuine enthusiasm is President Obama’s March Madness bracket. Liberals hope to match it or best it. Conservatives hope to obliterate it, but unlike most hot political topics, it’s all in good fun, right? For many, March Madness is the ultimate return and escape: a return to a simpler, purer time; an escape from the crass concerns of corrupt professional sports. This perception is, of course, rooted in myth.  This year’s March Madness tournament will earn the NCAA close to a billion dollars in revenue. TV ratings for CBS, who aired the tournament games, skyrocketed to an 18-year high. That this tangled mess of contradictions and hypocrisies is cause for celebration for anyone other than the NCAA — and CBS — is a sign of both the accuracy and the timelessness of Juvenal’s old adage about bread and circus. Rather than celebrating, we should all approach March Madness with a sense of foreboding. March Madness is emblematic of so many troubling trends in business, labor, education and race that extend way beyond the basketball court.

For starters, the NCAA is a cartel that has created a monopoly, and like other cartels it argues that its goals and the public's goals are one and the same — John D. Rockefeller argued that Standard Oil's monopoly provided stability, and OPEC, according to its website, “organizes and unifies petroleum policies in order to stabilize oil markets”. The NCAA predictably calls itself a “membership-driven organization dedicated to safeguarding the well-being of student-athletes and equipping them with the skills to succeed on the playing field, in the classroom and throughout life.” All unassailable goals, sure, but cartels, whether they're the NCAA or OPEC, exist to fix prices — in the case of the NCAA, it's the price of labor.

But don't call the basketball players workers. The NCAA reconciles the dilemma in the public’s mind by creating euphemisms that redefine both labor and laborers. It makes a point of emphasizing — ad nauseam — that the athletes participating in March Madness are "student-athletes" or amateurs, even though these so-called kids are contractually obligated to participate in press junkets, to perform consistently at a high level on the court, to wear the logos of sponsors and to submit to social media monitoring by their respective schools. If they fail in any of these duties, their athletic scholarships can be revoked — no matter how well they are performing academically. They can also be saddled with medical bills later in life from injuries sustained while they were working as student athletes, because they are not employees and thus not eligible for worker’s compensation coverage. Like many workers today, they exist in a kind of netherworld with limited rewards, but ever expanding punishments.

We see echoes of this in a number of other places, with interns doing the work of workers, temps doing the work of staffers, adjuncts doing the work of professors – but none of them reaping the benefits associated with the higher position. Others are now working in the “sharing economy,” driving for car services, assembling furniture, cooking and cleaning for an hourly rate. These are all supposed to represent opportunities for advancement, in many ways akin to those of the student athlete — the chances of making it to the pros (in other words, to a full time staff position) are increasingly slim. Labor organization is discouraged or outright forbidden. Euphemisms also transform the nature of the worker and the work itself, but usually in the employer’s favor. So, a temporary employee for amazon.com will find herself signing both the kind of limited-terms agreement that we associate with a temp worker and the kind of non-compete clause we associate with permanent employment.

The answer to this limited mobility, in the imaginations of many, is more education. But spending on education in America is at an all-time high, while social mobility is at historic lows. Testing and assessments have become synonymous with teaching in many classrooms. For-profit colleges, with little regulation and oversight, leave graduates with few marketable skills and loads of debt. The costs of traditional universities have skyrocketed, making some majors off-limits to those hoping to eventually pay off student loans. It would seem insane to celebrate this trend of education-without-learning in a national forum — but that’s exactly what celebrating March Madness implies.

The NCAA itself has made statements that call into question its own commitment to education. Last week, in a rare moment of candor, the NCAA said outright that it was not its responsibility “to ensure the academic integrity of the courses offered to student-athletes at its member institutions”, yet somehow the academic eligibility of its players is always a concern. The case that led the NCAA to admit its indifference to academic integrity was the curious case of grade inflation at the University of North Carolina, which created watered-down so-called paper classes — official classes with no meeting times and all-but-guaranteed high grades for submitted papers, regardless of quality — within its African American Studies program that advisers then guided athletes into in order to boost their GPAs. After an independent review,  CNN reported that the creator of these classes started the practice "out of sympathy for athletes and other students who were not 'the best and the brightest.'" Research by a UNC learning specialist, who later filed a whistle-blower lawsuit against the university, showed "the gap in academic preparedness between profit-sport athletes and students at NCAA (Division 1) institutions perpetuates educational inequality."

UNC’s story hints not so subtly at the real elephant in the room when it comes to March Madness: race. Sports journalists are perfectly willing to criticize a player like Andrew Harrison for uttering a racial slur about a member of an opposing team, because it feeds into the prevailing idea that college sports at the Division 1 level is not a gargantuan commercial enterprise, but rather a kind of missionary effort that just happens to lead to incredibly high compensation for coaches and administrators from the mostly free labor of mostly young black men. So, Andrew Harrison needs “guidance” from his multimillionaire coach about the importance of etiquette and sportsmanship? That’s the race story, not the one about the fake African-American studies classes designed specifically to exploit African-American labor. And most March Madness stories do not explore the irony of an event that so blatantly exploits young black men coming on the heels of February’s Black History Month. Rather, the story is that the NCAA is “safeguarding the well-being” of “student athletes” — with March Madness serving as the annual celebration of this noble effort.

In Shakespeare’s “Julius Caesar,” the main character misses the signs of his impending doom, not because he is blind, but because he refuses to see. March Madness, what it is and what it represents, is a warning to us, because buried in all of the pomp and pageantry are simple lies and much simpler truths. Cartels and collusion were outlawed for reasons and those same reasons should apply the NCAA. The “student athlete” is a legal and social construction created to make this collusion more profitable, and the handwringing about education surrounding it to make the collusion more palatable.

The NCAA limit on assistant coach salaries was deemed to be in violation of antitrust law back in 1998, so the same rules should apply to athletes. Of course athletes should be able to be paid, and removing the constraints means that a more open market can emerge and athletes and their families can make the decisions that best suit them. Athletes can then choose from any number of plans and options, some of which might be identical to the current system and some not. However, the NCAA should not be able to make this decision for the athletes and all of college athletics. That’s absolute power, and we all know that it corrupts absolutely. If we miss the warnings here, we will continue to miss them elsewhere and we will find ourselves fighting battles we thought we had already won in our own workplaces, schools and communities.