Conservative hawks try out a new attack on Rand Paul: he's worse on foreign policy than the Benghazi lady 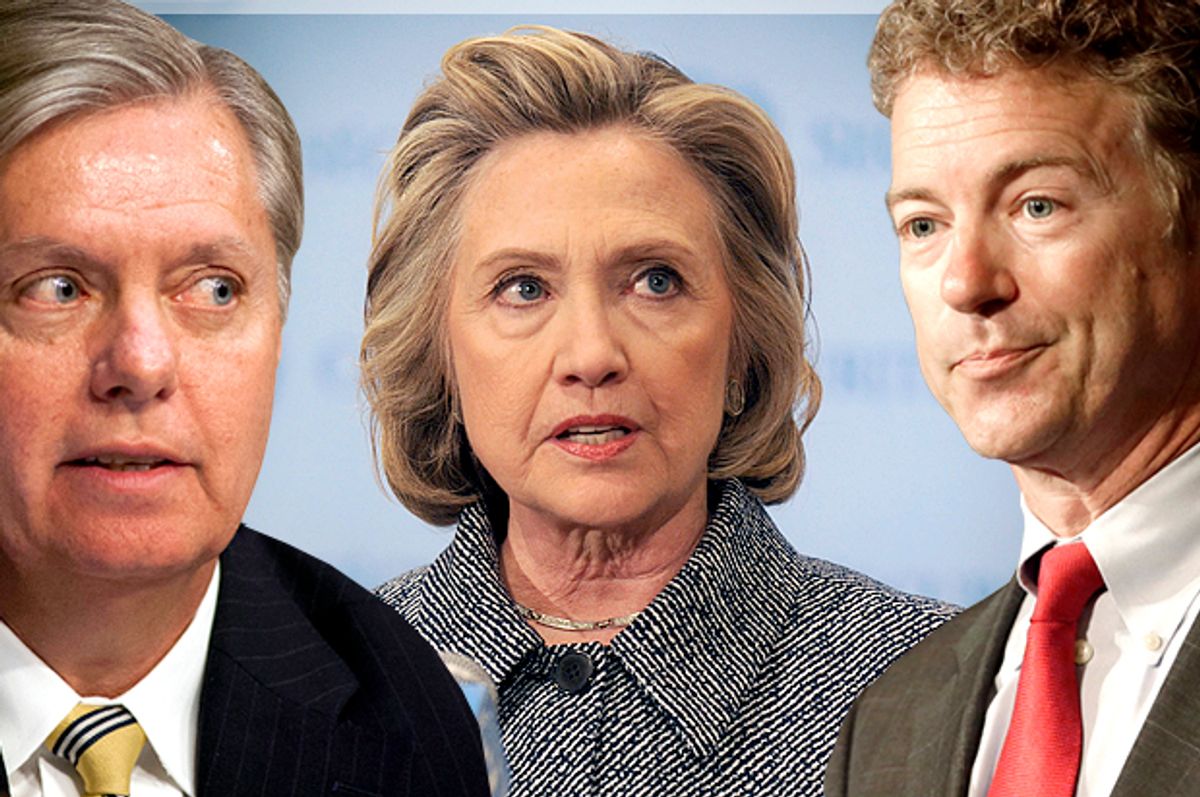 Today, at long last, freshman Sen. Rand Paul will officially declare himself a candidate for the presidency. He already has a clunky, slam-poetry-inspired campaign slogan: “Defeat the Washington machine. Unleash the American dream.” And he has a plan to run an “unconventional” campaign to win the White House by being a “different kind of Republican” who isn’t afraid to say crazy and horrible things.

That “different kind of Republican” shtick is a reference to Paul’s libertarian-ish worldview that sometimes leads him to deviate from party orthodoxy, and some of those apostasies have earned him the undying hatred of certain factions within the GOP. This is especially true of the Republican foreign policy hawks, whom Rand Paul has taunted as warmongers while advocating a less interventionist flavor of national security policy. They absolutely hate him and are not shy about saying so in public – Paul was one of the Republicans whom World’s Angriest Man John McCain called “wacko birds” for mounting a filibuster to protest U.S. drone policy.

Now that Paul is throwing himself into the 2016 race, the hawks are trying out a new and, to their mind, devastating attack on Rand: that Hillary Clinton would do a better job at foreign policy.

Sen. Lindsey Graham test-drove this zinger over the weekend while appearing on CBS’s “Face The Nation.” He was on to discuss the new diplomatic framework for curbing Iran’s nuclear program, which Graham and most Republicans hate because it lessens the likelihood of bombing Iran anytime soon. Graham endorsed the mythical “better deal” option for negotiating with Iran and said that pretty much everyone running for president right now could make that better deal happen – with one exception: “The best deal, I think, comes with a new president. Hillary Clinton would do better. I think everybody on our side, except maybe Rand Paul, could do better.”

Jennifer Rubin made a similar observation yesterday on her Washington Post blog, which at this point is basically just a long-running denunciation of the Kentucky senator and his foreign policy:

Of all the GOP contenders, he is closest in outlook to Hillary Clinton. And that is not where you want to be if you are running for the president as a Republican. Indeed, it is not unreasonable for some voters to conclude that on foreign policy Clinton would be stronger than Paul.

There’s just so much fun stuff to unpack here.

First of all, as it pertains to Iran, we already know where Hillary stands: she supports the multilateral diplomatic framework, albeit with the standard caveat that more work remains to be done. Rand Paul’s stance, however, remains something of a mystery. After a week or so of dodging reporters on the issue, his PAC finally served up a nothing-burger of a comment: “Senator Paul will be watching closely and believes any deal must make clear Iran cannot acquire a nuclear weapon, allows for full verification and is approved by Congress. He voted for sanctions both times they were put before Congress and believes only Congress should remove those sanctions.” At the very least, he’s more circumspect than Clinton appears to be (though, admittedly, it’s tough to tell). So if Hillary's going to stick to the framework, do these hawks think Rand will negotiate a worse deal than the one already in place?

Also, Republicans like Graham and Rubin have been at the forefront of the broader GOP effort to try and crucify Clinton on foreign policy through extensive repetition of the word “Benghazi.” Indeed, Rand Paul has made clear that his plan for taking on Clinton is to make her own Benghazi in every way that she can possibly own it. But the hawks are so aggrieved by Rand Paul’s heretic views that they now consider him less competent on the international stage than the person who presided over what they view as the most significant foreign policy disaster of the last decade or so. That’s how much they hate him – they think he’s worse than the person who did Benghazi.

The good news for the hawks is that Rand Paul is nothing if not malleable in his policy positions, foreign policy included. The same Rand Paul who decried “hawkish” Republicans for their interventionist policies turned out to be an enthusiastic proponent of using U.S. military might to “destroy” the Islamic State. And the same junior senator from Kentucky who once warned conservatives that they’d have to swallow defense budget cuts in order to reduce overall spending is now proposing adding many more billions of dollars to the Pentagon’s budget. Rand Paul is as sensitive to political advantage as any politician, so it’s possible that he’ll discover a hawkish streak as the 2016 campaign wears on.

If not, at least Graham and Rubin will still have Hillary Clinton.