The senator lectures NBC’s Savannah Guthrie on how to do her job. What's Paul's problem with female interviewers? 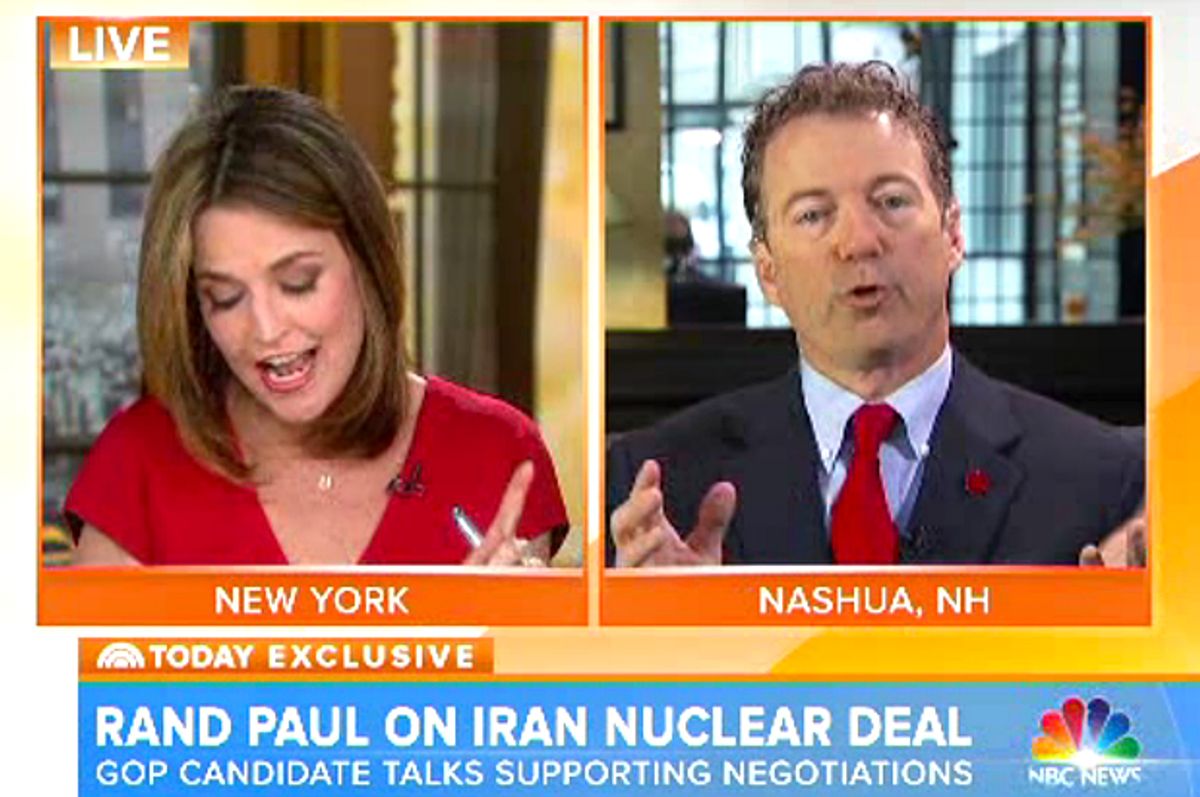 We saw the best of Sen. Rand Paul Tuesday afternoon as he announced his presidential candidacy: thoughtful, in control, strong on civil liberties. We quickly saw the worst of him again: Mansplaining Randy Paul showed up on the Today Show Wednesday morning, lecturing Savannah Guthrie on how to do her job and otherwise being contentious and contemptuous. You can watch it here:

After a few pleasantries – Paul claimed he was too interested in sports, “academics and reading” to ponder a career in politics when he was younger – Guthrie asked him his position on the “framework” of an Iran nuclear deal announced last week by President Obama. Paul said he thought only Congress can lift the sanctions it imposed. That’s a controversial view, but widely shared. Fair enough.

Then Guthrie asked about three ways he’s changed his “unorthodox” foreign policy views in recent years: He once said Iran wasn’t a threat, he opposed foreign aid to Israel and he favored defense cuts; he’s flipped on all three.

“Sure,” Guthrie said. But Paul continued to berate her.

Before we go through a litany of things you say I’ve changed on, why don’t you ask me a question, ‘Have I changed my opinion on it?” That would be sort of a better way to approach an interview.

OK: Is Iran still not a threat?

Then he simplistically and condescendingly walked her through the world according to Rand, with one more peevish "let me answer the question" about his evolving position on aid to Israel.

What a steaming load of entitlement. Paul interrupts an interviewer, then blames her for talking over him and lectures her on “a better way to approach an interview.” When she accepts his premise, and asks the question the way he suggests she should ask it, he won’t accept it, and berates her yet again.

If all this sounds familiar, it should: Paul had a similar tantrum with another female interviewer, CNBC’s Kelly Evans, just two months ago. You’ll recall: Evans asked Paul about his odd statements questioning vaccine policy in the wake of a dangerous measles outbreak. The Kentucky senator not only bristled, he rudely shushed the news anchor, literally, with a finger to his lips.  “Let me finish. Hey, Kelly, shhh. Calm down a bit here, Kelly. Let me answer the question.”

At least he didn’t tell her what her question should be.

There’s a lot going on here. To be fair, Guthrie hit Paul with the toughest challenge for his campaign. He has, in fact, moderated some of his foreign policy views, which risks losing him his father’s passionate, anti-intervention base of support. Yet the neocon hawks hate him anyway, and they’re spending millions to derail his candidacy before it gets off the ground.

And Paul’s entitlement may not only be an issue of gender. I’ve written often about Randy Paul the pampered princeling, who acts as though his every uttering is genius, who clearly wasn’t shushed enough at the dinner table growing up.

On the other hand, it’s hard to leave gender out of it, since I can’t think of a time when Paul treated a male interviewer so poorly. Not just poorly, but contemptuously, and with an evident irritation at the shocking spectacle of a journalist doing her job.

Paul either gets his buttons pushed in these situations and he just can’t control himself, or he’s deliberately insulting female journalists to play to the GOP base’s distrust of a) journalists and b) uppity career women. I’m not sure which is worse, that he's got a remarkably short fuse, or that he'd insult a female journalist to play to his party's caveman base.

But I know one thing: It would be a lot of fun to see him in a debate with likely Democratic nominee Hillary Clinton.