Now-infamous video shows an unarmed man gunned down from behind. A review of public court records shows even more 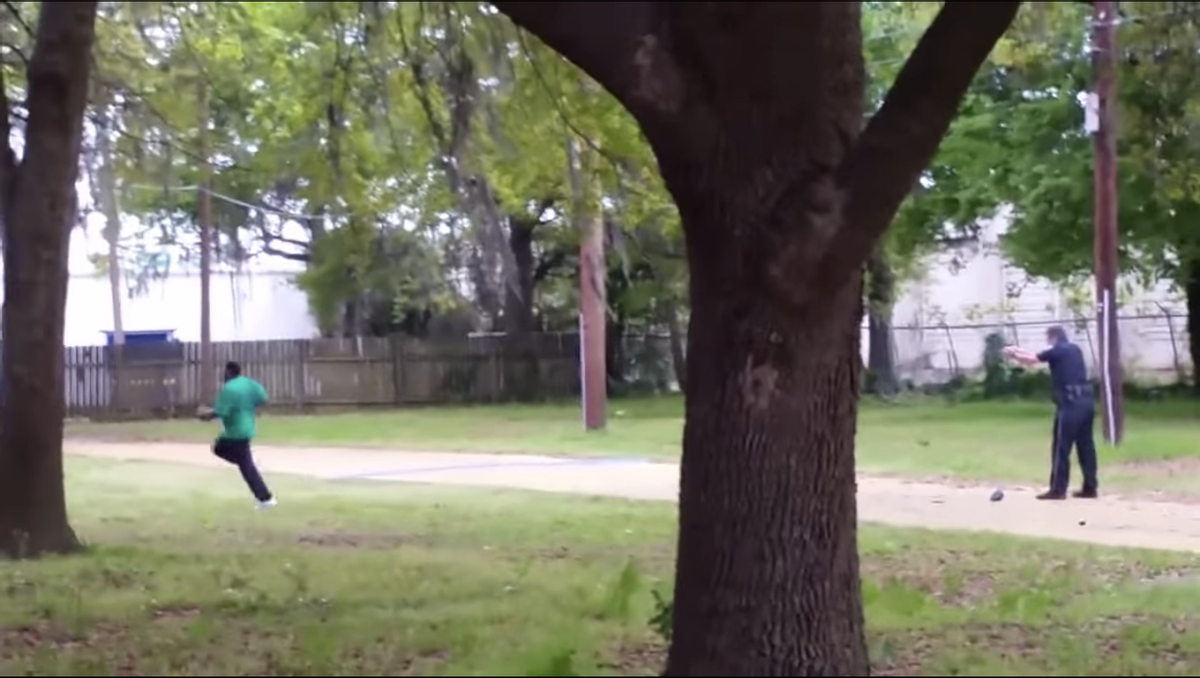 Sheldon Williams was sleeping at a Budget Inn in North Charleston, South Carolina, when five police officers entered his motel room. After finding Williams hiding under a mattress, the officers pinned the unarmed man to the concrete floor, handcuffed him, and then began stomping on his face. Williams, an African-American, was unarmed and never accused of resisting arrest.

Williams would later be diagnosed with several broken facial bones, but the five officers first brought him to the jail. Jail officials had to turn Williams away because of the severity of his injuries. More than two hours after he was beaten, Williams finally arrived at the Roper St. Francis Hospital and was diagnosed with a fracture to his cheekbone, a depressed fracture to the left orbital floor of his face, and a third fracture of the left sinus wall.

When Williams was released, the hospital staff gave law enforcement explicit instructions that he would have to see a special surgeon within one week. That information was somehow ignored, and Williams’ broken facial bones were never treated. Needless and agonizing pain followed: Williams now struggles to sleep at night and faces long-term neurological damage. Sometimes, because of the extent of the nerve damage, Williams “experiences a sensation of insects crawling on the left side of his face.”

The above account comes from just one of the many federal lawsuits filed against the North Charleston Police Department over the last 10 years. That police force is now under the national spotlight for the outrageous slaying of Walter L. Scott, an unarmed black man who was gunned down as he was running away from police, according to a report in the New York Times. North Charleston Police Officer Michael T. Slager, who is white, was charged with murder on Tuesday after a video emerged showing the shooting and its aftermath in excruciating detail.

It’s hardly surprising that Slager remained un-prosecuted prior to the release of the video: South Carolina police have fired on 209 suspects over the past five years, but only a few have been charged and none have ever been convicted, according to The State, a South Carolina newspaper.

The situation in North Charleston appears particularly bleak. Based on a review of public records, the North Charleston Police Department has been sued 46 times since 2000 in federal court alone. Many of the suits have been unsuccessful. Some were written by hand from jail and immediately thrown out. Others ran into trouble over evidentiary and procedural obstacles. Taken together, however, the legal documents present a stunning account of police brutality in North Charleston, where the population is 47 percent black but the police force is about 80 percent white, according to the Times.

None of the officers accused of assaulting Williams in that motel room on Nov. 19, 2011, were fired, according to Chris Robertson, a member of Williams’ legal team: Officer J. Byrum, Officer J. Fogel, Officer Habersham, Officer K. Beckman and Sgt. Kruger were all still on the force as of about two months ago, and there’s no reason to believe that’s changed, Robertson said.

What follows are just a handful of the accusations of police brutality made against the North Charleston Police Department over the last 15 years, according to court records reviewed by Salon. (The department directed a request for comment to City Hall. A message to the city's Public Information Office was not immediately returned.)

After she was convicted of possessing marijuana, Melissa Faith Gardner was sentenced by a judge in North Charleston to either pay a $373 fine or spend 30 days in jail. She didn’t have the money.

Gardner grew terribly upset and started “crying hysterically,” according to a lawsuit. In response, North Charleston Police Officer Timothy J. Blair reacted with "excessive force" and broke Gardner’s arm, according to the lawsuit.

“Blair did not break the plaintiff's arm maliciously or with the intent to harm her, but broke her arm as a result of a willful, wanton, reckless, careless, negligent, and grossly negligent use of force,” the lawsuit said.

A shocking federal complaint says police were warned that Wylder was mentally unstable. It says that Wylder was pepper-sprayed and beaten before being shot twice. Witnesses say that Wylder was shot after he was in handcuffs, according to newspaper reports at the time.

North Charleston Police Chief Jon Zumalt called witness reports "an absolute fabrication of what happened,” according to the Associated Press.

The case was decided in favor of the police department in 2007 and an appeal for a new trial was denied.

Brian Yates, a U.S. soldier whose military awards included the Global War on Terrorism Service Medal, sued the North Charleston Police Department in 2012. According to the Post and Courier, Yates was driving to pick up his wife and daughter in 2008 when he was pulled over by an officer. “Yates claimed the officer ordered him out of his car, twisted his arm, then deployed his stun gun onto Yates’ back,” the newspaper reported. “The officer stunned him three times, police and court records show.”

The case is still winding its way through the federal court system and is expected to go to trial in May.

At around midnight on Aug. 7, 2011, Evelyn DeVillegas was standing in the parking lot of the Market Street Saloon in North Charleston with her husband, brother and friends.

North Charleston police arrived, asked for DeVillegas' ID and then arrested her. They told the U.S. Citizen that you “are probably a wetback, …I bet you’re not legal,” according to federal court records. She was held in jail and forced to pay $485 to be released.

DeVillegas sued the police department in federal court in August 2013. Law enforcement disputed the claims and said the officers had "acted reasonably and in good faith." The claims against the North Charleston Police Department, City of North Charleston, and County of Charleston  were dropped toward the end of 2014.

After going through the drive-through at a Kentucky Fried Chicken, Robert Wayne Bishop drove down Rivers Avenue in North Charleston before being pulled over. The officer told Bishop that “he was stopped randomly because he was driving through a high drug trafficking area,” according to federal court documents, and was ordered out of the vehicle.

Bishop was then pushed “face-first” onto the pavement, had the officer’s knees pushed into his neck and was dragged by his feet, according to records submitted by Bishop’s attorney.

“Another North Charleston Police Officer, Daniele, arrived on the scene with his canine and allowed the dog to ‘nip’ at Plaintiff, who sat in the road while handcuffed and bleeding from his nose and face,” the lawsuit states.

“As a result of the force … Plaintiff suffered a broken nose, a broken tooth, and a lacerated lip, all of which required surgery.”

The police officer had a different memory of the events, telling officials instead that Bishop had resisted arrest.

The case was dismissed in April 2013.