"New Girl" gets serious about race: "When I was a kid we used to run from the police, even if we did nothing wrong"

Winston struggles with his new role as a cop, and in a frank and honest scene, explains to Nick why he can't relate 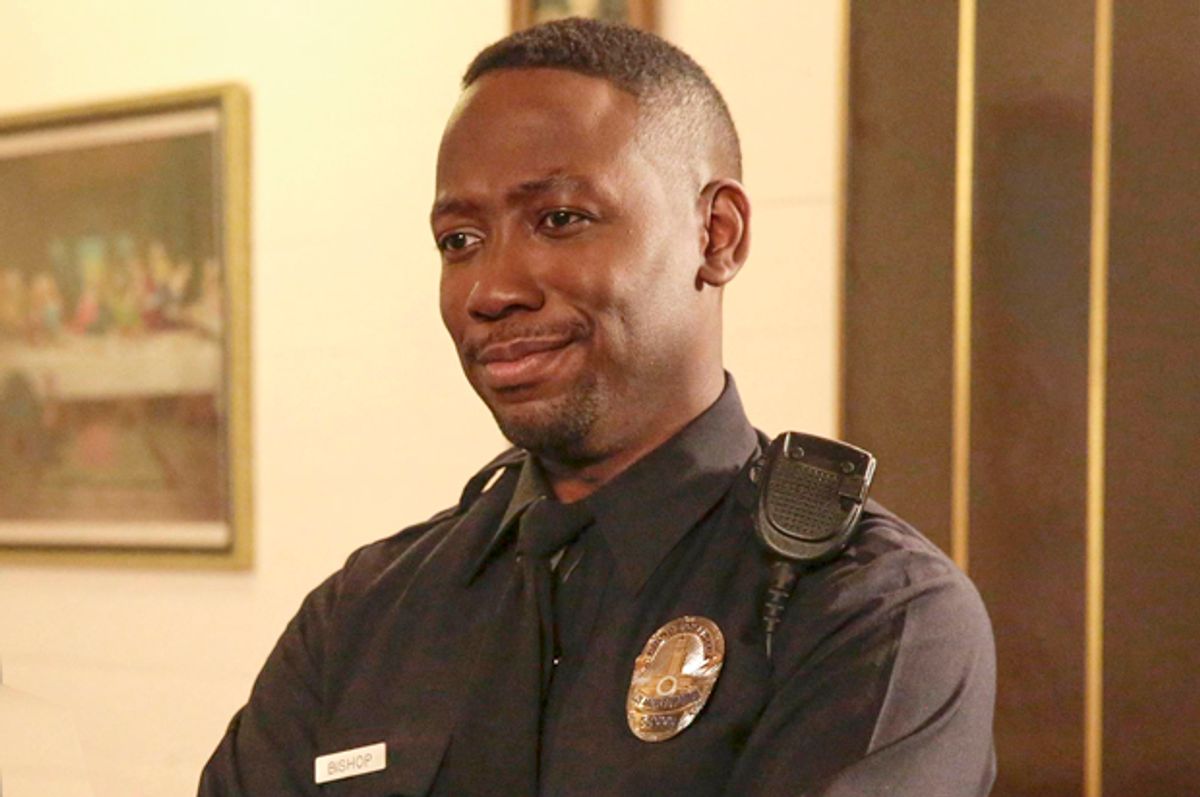 Viewers don't normally come to "New Girl" for serious meditations on race relations in America — that's just not the road that this hipster "Friends," a high-middlebrow sitcom about a chosen family of quasi-adults, usually takes. As Gwen Inhat at the AV Club says, the show tends to play race and differences between the diverse cast of characters for laughs instead. But in last night's nuanced and emotionally-astute episode, Winston (fresh on the LAPD force and earlier in the episode, quite proud of his job) goes on a spur-of-the-moment date with an activist who protests against police brutality, and even as his uniformed colleagues are saying hello to him and "see you at work" right in front of her, he pretends he and they are professional strippers (shades of  Gob's "Hot Cops" on "Arrested Development") rather than admit to his date that he's on the force.

It's a silly gag, but later, at home, Winston opens up to Nick about his conflicted feelings in a touching and sincere moment that shows just how difficult it can be, even for lifelong best friends, to bridge this experience divide.

Winston tells Nick that he can't believe he couldn't just tell KC, his date, what he does for a living, alluding strongly to the national atmosphere of anger and fear over police officers killing unarmed black men and women. "With everything that's been going on, I just felt like she wouldn't respect me," he explains.

Nick: "You wanna know what I think?"

Winston: "Nick, no, I don't. This is something you can't understand."

Nick: "Why, because I'm not black? Because I don't work for NASA, I can't fix a rocket ship?"

Nick — his ridiculous analogy to NASA aside, since, as Winston points out, that's exactly what it means — doesn't realize his role here is to listen, not weigh in. This is a sitcom, of course, so the tension is cut periodically with the kind of silly/wry gags the show does well, like when Winston reminds Nick that "you lost your right to talk to me about race during the O.J. trial," followed by a classic cutaway flashback gag of young Winston and Nick watching the O.J. freeway chase and Nick complaining, "why does it have to be a 'white' Bronco, why can't it just be a Bronco?"

Nick is hurt — he wants to connect with Winston here, and can't understand why his oldest friend doesn't want his advice this time. "I can talk to you about this," he insists. "We grew up together, we went to the same schools, we watched the same TV shows, we listened to the same records."

Nick follows that with a bad Eddie Murphy impression, which Winston calls out as super-uncomfortable. "You and me are going to get weird about race?" Nick replies, challenging him to do his Seinfeld, which Winston actually nails. Then, he cracks a knowledge egg open on Nick, exposing just how different their "we grew up together" childhoods were.

"I love you, but you're white. I'm black. I understand where she's coming from. When I was a kid we used to run from the police. Even if we did nothing wrong, it was just out of habit," Winston says.

Nick is sympathetic, but also seems almost hurt by this revelation: "Why haven't you ever told me that?"

"'Cause you'll never get it," comes a voice from behind them — it's Coach ("the only other black man in this loft"), who then shames Nick's white-boy Murphy impression, and wanders off singing a made-up song about scoring some "race talk snacks." Back to sitcom gags, but the point has been made — Winston has revealed a part of himself that he felt he had to compartmentalize from his friendship with Nick, who grew up blissfully unaware that a shared generational love of Eddie Murphy doesn't erase centuries of institutional racism.

At the end of the episode, Winston visits KC at work — in uniform — revealing his job and his motivations for taking it: "I work with a lot of great people, and I want to be one of them. Plus if there are ever Ghostbusters, I know they're going to recruit from law enforcement first."

It's a sitcom, so of course she's not mad he's a cop, she's just mad that he lied! And then she makes a stripper joke — and he performs an adorkable little routine for her and her colleagues. We can all lighten back up now.

A less-than-edgy buddy comedy like "New Girl" doesn't necessarily have to task itself with telling the whole story of race in America — that can be a risky topic to put on the table in a show about a tribe of appealing yet bumbling doofuses, at risk of being played for glib laughs. And as yesterday's news that a North Charleston police officer has been charged with murder for shooting an unarmed black man eight times in the back (yet another shameful episode that chips away at the narrative of a few random rogue bad apples disrupting an otherwise functional and respectful relationship between police forces and the communities they serve) shows, this is life-or-death material. But when written and performed thoughtfully, it pays off. Last night's episode highlighted how well an important storyline can work in the contemporary sitcom model without veering into sentimental "Very Special Episode" territory or losing its comic edge. Like every episode of "New Girl," the point of this plot isn't really about how things will go with Winston's love interest once she learns he's a cop, anyway. What's at stake in the world of the show is the relationship between Nick and Winston. Nick might have thought he knew everything about Winston before that talk, but now he knows there are some things he will never really understand.