Paul's becoming more hawkish, but right-wing media hawks aren't applauding him yet. Why should they? 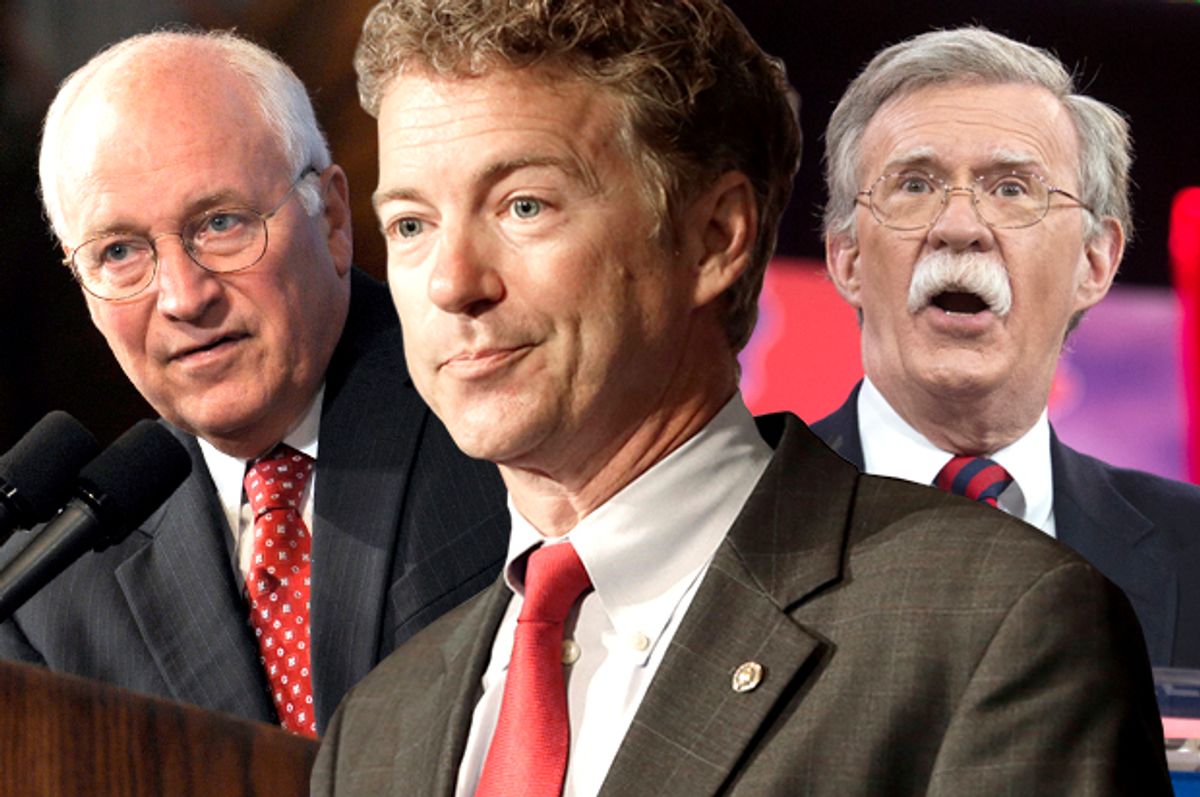 The section of Rand Paul's announcement speech addressing foreign policy -- the area where he's allegedly at odds with the mainstream of the party -- fit in neatly with his recent trending toward acceptable hawkishness. But it was done in carefully crafted language that, while aspiring to meet hawks' standards, wouldn't immediately scare away what remains of his father's die-hard libertarian base.

He spun his recent amendment to jack up the Pentagon budget through the familiar trope of "Ronald Reagan wanted peace through strength -- just like me!" He couched his desire to do whatever it takes to "destroy ISIS" by representing ISIS as some great immediate threat to our Constitution. IT IS PURELY DEFENSIVE. On Iran, he stuck to the plan his spokesperson previewed earlier in the week: hiding behind process objections to avoid commenting on the substance of the preliminary deal.

There was another quizzical bit about Iran, though. He mentioned that "we brought Iran to the table from strength, through sanctions I voted for," and then appeared to rap the president's knuckles for ... not negotiating from a position of strength? Even though he was saying that the president was negotiating with Iran from a position of strength, thanks to Rand Paul?

As the Washington Examiner's Philip Klein writes, Paul "glosses over" his own record on sanctions when he presents himself as the Sanctions Guy who brought Iran to the table. We'd describe it another way: Paul once again moved to the right on foreign policy. Paul had been on Obama's side over the last year when it came to imposing a new round of sanctions, as the Kirk-Menendez bill would do. In December, Paul said, "'I think it would be a mistake to push them away from the table." He had expressed a similar view earlier in the year:

“I think while they’re negotiating, and if we can see that they’re negotiating in good faith, I don’t think it’s a good idea to pass sanctions while we’re in the midst of negotiations,” Paul said on CNN. “I think the bottom line is we should give negotiations a chance. My hope is that sanctions will avoid war. We’ve been involved in two long wars in the Middle East. And I think it would be best if we can do anything possible to try to avoid another war now.”

This is the exact argument that the administration has been making from about 18 months ago to the present on new sanctions. Now he is lecturing the White House about the importance of sanctions.

The only real sop to the sort of non-interventionism that Paul used to espouse regularly was his call to avoid "nation-building" projects overseas. That's presumably a dig at neocons, but not even neocons go around excitedly talking about new prospects for "nation-building" as though they're real estate developers. They just sort of fall into it, because that's where so many hawkish avenues end.

Klein is just one hawkish writer who's not sold on the new, war-friendly Paul. As readers of my columns know, I enjoy following the hawks' take on the 2016 field through the prism of hilarious Washington Post blogger Jennifer Rubin. To catch you up: Rubin is the sort of hawk who will turn cold on Jeb Bush for talking to longtime Bush family friend and public servant James Baker every now and then. And her Twitter feed during Paul's announcement speech was basically a whiteboard of opposition messaging against Paul.

Rubin is a cartoonish example, but she does represent the Republican foreign policy establishment's view of Rand Paul: He must be stopped, no matter how much he moves toward us. Bloomberg's Josh Rogin reported that a 501(c)(4) "dark money group" went live the same day as Paul's announcement. They'll have to tell the taxman that this nonprofit will serve some sort of broad public welfare purpose, but it's just another big money group set up to go after Rand Paul while shielding its donors:

The Foundation for a Secure and Prosperous America, a 501(c)(4) group led by veteran Republican operative Rick Reed, will go live with its campaign against Paul on Tuesday, while the senator is in Louisville, Kentucky, announcing his presidential candidacy. The group will begin airing ads on broadcast TV, cable and the Web in several early primary states accusing Paul of being weak on Iran and tying him to the Barack Obama administration’s Iran policy, which polls show is deeply unpopular among Republican voters.

“Paul supports more negotiations with Iran while standing against more sanctions that would hold the Iranian regime accountable. That’s not a conservative position, that’s Obama’s position,” Reed told me in an interview Monday. “His longstanding position on Iran and his agreement with Obama on Iran calls into question his judgment.”

The scale of the campaign is remarkable this early on in a primary fight, and reflects not only the depth of the hostility toward Paul’s worldview among many conservatives but also the prominence of national security in the 2016 cycle.

This is just one group that exists to destroy Rand Paul because he's previously shown some hesitancy about bombing everyone. Dick and Liz Cheney started their own 501(c)(4) last year to destroy Rand Paul. John Bolton and Lindsey Graham are considering running for president to defeat the scourge of Rand Paul-ism. Sheldon Adelson is prepared to deploy hundreds of millions of dollars into this election cycle to stop the dreaded isolationist terrorist sympathizer, Rand Paul.

It's tempting to tell these hawks to take yes for an answer and pack it up. Paul has come to them. But since Paul has already moved, why stop now? The longer they resist him, the further he'll move toward their understanding of the world. The sanctions against Paul are working. Peace through strength.