The media's absurd Rand Paul spin: When increasing militarism counts as "mellowing out"

This is some seriously Orwellian doublespeak... 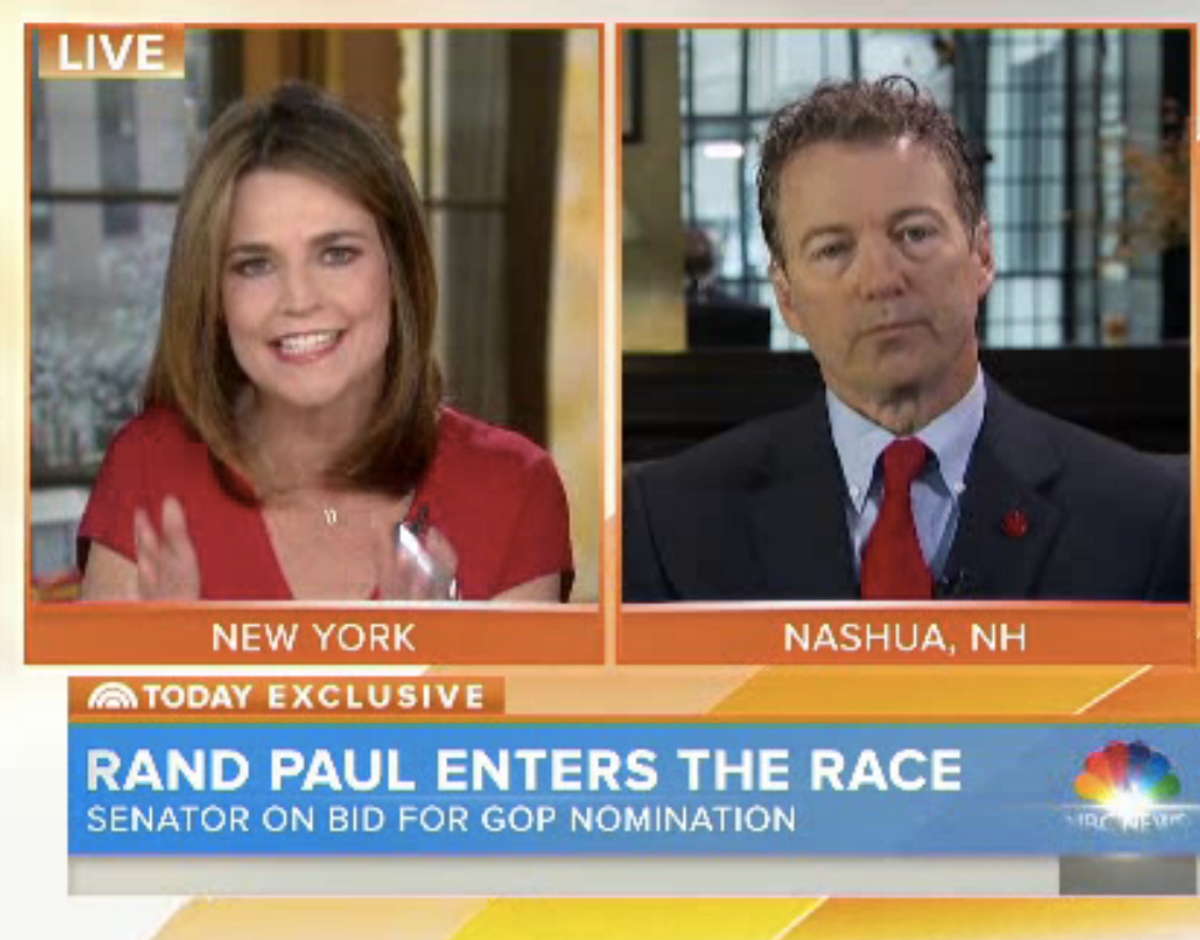 Most of the attention that will be paid to today's interview by NBC's Savannah Guthrie will, no doubt, focus on Sen. Rand Paul's dismissive and somewhat condescending treatment of the female Today anchor. It does echo, after all, a similarly condescending and arrogant tone he struck last February during an interview with CNBC's Kelly Evans, when he literally "shushed" her and told her to "calm down a bit" as she asked him uncomfortable questions.

But what caught my eyes and ears in this latest video (posted below) was something else entirely. And it's something which reflects far more poorly on Guthrie and the corporate media in general than it does on the junior senator from Kentucky and 2016 Republican presidential candidate.

While it's true Paul appears to have trouble dealing respectfully with female interviewers, and is now wildly reversing many of his previously strongly held foreign policy positions in hopes of wooing GOP voters, it's the mindset behind Guthrie's opening question which disturbs me far more. And it's one that we've seen before in the supposedly "mainstream" media.

"You seem to have changed over the years. You once said Iran was not a threat, now you say it is. You once proposed sending foreign aid to Israel, you now support it, at least for the time being. And you once offered to drastically cut defense spending and now you want to increase it 16 percent," Guthrie asked in her initial question, touching off Paul's obfuscating interruptions, before she added: "So, I just wonder if you've mellowed out?"

In other words, setting aside Paul's bluster and objections to being confronted with his past positions; the increased militarism of saber-rattling with Iran; sending more military aid to Israel and increasing an already wildly bloated U.S. defense budget -- all of this, in the eyes of Guthrie (who is quite representative of the mainstream corporate/media/political elite here), is akin to having "mellowed out."

Yes, a more aggressive foreign policy amounts to "mellowing out" by today's MSM standards in the U.S.

And, just in case you think Guthrie may have chosen the words "mellowed out" while flustered by Paul's attempt to cut her off, she offered an almost identical restatement of the question near the end of the segment: "The question I was getting at, in general, is just that when you came to Washington and realized 'I was going to run for President,' have you mellowed or tempered your views at all?"

That's some seriously Orwellian "war is peace" shit right there from Guthrie. And, as disturbing, I suspect very few, if any, in the MSM covering this kerfuffle today will even notice it.

This is now the mindset of the American media. For more evidence, see the almost identical thought process offered by CNN's Erin Burnett back in 2013, as then Republican Senator Chuck Hagel was being considered as the next Defense Secretary.

Burnett critically cited Hagel, a Vietnam vet and two-time Purple Heart recipient, for saying in 2006: "I would say that a military strike against Iran, a military option, is not a viable, feasible, responsible option ... I believe a political ... settlement will be the answer. Not a military settlement."

Then, quoting a more recent op-ed, in which Hagel wrote that "U.S. security is seriously threatened by an armed Iran," Burnett said: "To be fair, he has tempered his point of view."

Yes, as we noted at the time, "shifting one's position towards a possibility of war, rather than diplomatic solutions, [has] become a 'tempered' point of view in this country."

Neither of Burnett's guests at the time, one highly placed Republican operative and one highly placed Democratic operative, batted an eye at the peculiarly upside-down framing, which reflected what progressive blogger Howie Klein described to me as the "conservative consensus" reflective of our war-loving beltway elite.

That was Burnett's mindset on CNN in 2013 and we see the identical mindset --- almost to the exact words --- in news anchor Guthrie on NBC today. That's not Fox "News" or Rightwing talk radio, where you'd expect that sort of thing. Rather, it's the twisted mindset that represents the Orwellian, war-mongering views expressed casually as "consensus" every day on mainstream, supposedly down-the-middle "news" outlets and very few even seem to notice it, much less find it to be disturbing.