The messy business of defining "Islamic": Case in point, ISIS

Outlier or "very Islamic"? With many voices claiming their right to interpret the Quran, debate gets more complex 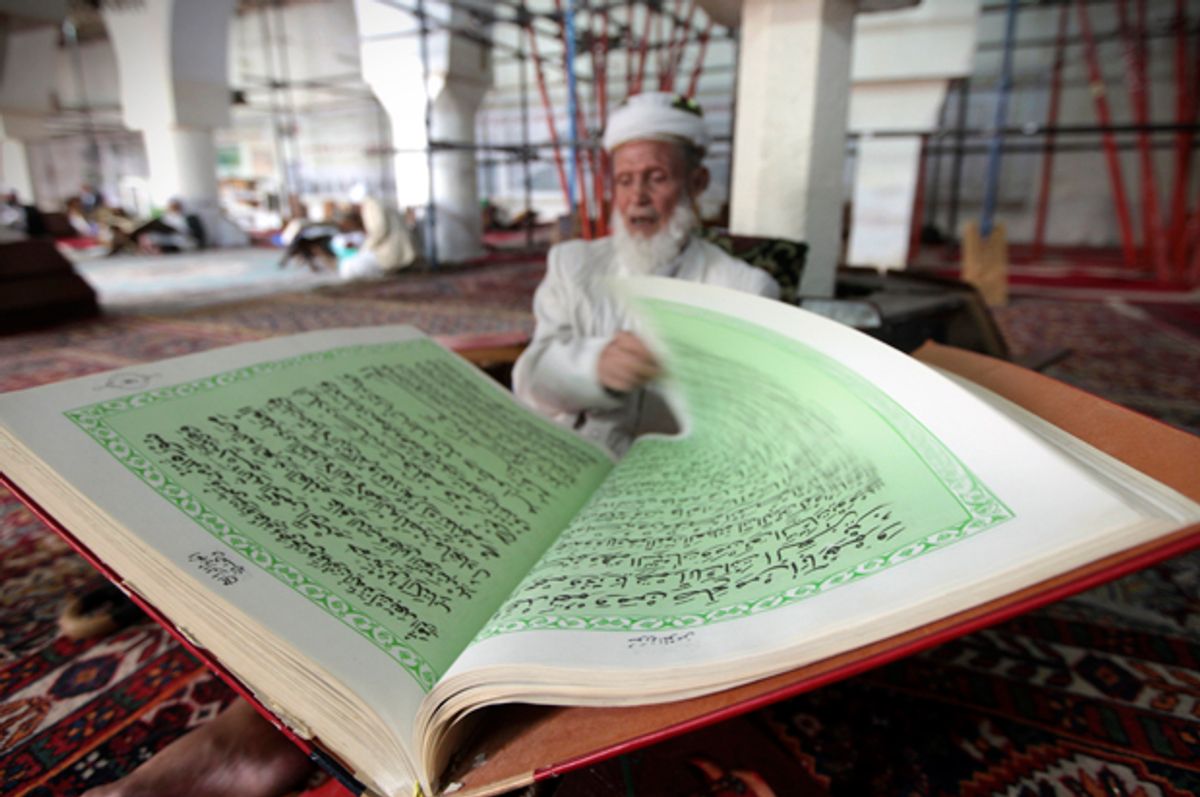 The news out of the Middle East these days is nearly always bad news, not least for Islam's image. Anyone learning about the faith from headlines alone could be forgiven for thinking it was powered just by a lust for blood and power, enforced by an inflexible legal code. Each immolation, beheading or kidnapping by ISIS or Boko Haram seems to burnish old Western stereotypes of Islam as an inherently strict and violent religion. This image isn't merely being endorsed by these groups' brutality and by Islamophobic rants, but by pieces in venerable magazines. Last month's cover story in the Atlantic argues that ISIS is not, as President Obama and others have argued, an extremist outlier, but that "the Islamic State is Islamic. Very Islamic."

Defining what is or isn't "Islamic" calls to mind the fable of the blind men and the elephant. Hunt hard enough through interpretations of a 1,400-year-old faith with a global following, and somewhere, you'll find someone justifying pretty nearly anything you want. Despotism or democracy, slaughter of non-Muslims or peaceful coexistence with them, women's submission to male authority, or liberation from it -- all have been justified by people citing classical Islamic texts as authority. Since Islam's Sunni majority sect lacks a hierarchical clergy, Muslim scholars can legitimately defend a wide range of interpretations, all safely from within the Islamic traditions. As the 126 Muslim scholars who signed the open letter to the Islamic State's Abu Bakr al-Baghdadi last fall stated, scholars can "differ on any matter, except those fundamentals of religion that all Muslims must know."

Like any sort of pluralism, Islamic intellectual debate has always been a messy business, what with five major schools of Islamic law, and no trade union to delineate who is an Islamic authority, and who isn't. The arrival of modernity has only made things messier. Until the 19th century, Muslim religious scholars -- the ulama -- pretty much had the monopoly on interpreting sacred texts. With French and British colonizers of Muslim countries keen to promote Western secular education, Muslim scholars and seminaries watched their influence dwindle. A widespread perception of Muslim scholars' overly cozy relationships with unpopular regimes didn't help: In many Muslim states, governments stuck scholars on their payrolls, undermining their traditional political autonomy.

With the rise of mass literacy in recent generations, more Muslims began going back to the Quran and reading it for themselves. Broader access to education in the 20th century, and the rise of new technologies in the 21st, has meant that more Muslims than ever are able to read their own religious texts, and to offer interpretations of them. This democratization of religious debate has kick-started a whole range of new movements, from Islamic political movements to Islamic feminism.

These new voices, declaring their own rights to study the texts for themselves, offer both promise and dangers. A new generation's ability to engage with the Quran and the hadith -- the Prophet Muhammad's words and deed -- can also run the risk of reckless do-it-yourself interpretations. Without training in the Islamic traditions, lay practitioners run the risk of riding roughshod over the nuances of a ruling. Today, anybody with an Internet connection can consult what some wag called "Sheikh Google" instead of a trained scholar. "One cannot 'cherry-pick' Qur'anic verses for legal arguments without considering the entire Quran and Hadith," warned last October's open letter to Al-Baghdadi.

In a classical Islamic education, to understand an Islamic text, you need to be mindful of its context. Take, for example, the Quran verse -- one cited in some anti-Semitic Islamic websites -- that seems, on the face of it, to compare Jews to apes and monkeys. The context, notes Muhammad Akram Nadwi, an Oxford-based Islamic scholar, refers to a very specific situation: a particular fishing town, Eilat, where some Jewish fishermen broke the Sabbath by spreading out their nets in advance of it, so as to catch fish when they should be observing Sabbath restrictions on work. The verse is directed just at those who break the Sabbath, explains Akram: "The other people in the town, the Jews who observed the Sabbath -- they are fine!" Crucial, too, is the the social context in which an Islamic law or theological tract was written, says Akram: "You need to know who the speaker is, and who their audience is, and the conditions of the era that produced it."

ISIS, unsurprisingly, has plundered the Islamic traditions, without much care for context. A Fulbright scholar of jihadi jurisprudence who blogs as Cyberfitna points out that ISIS's legal ideology is largely derived from the 13th century, developed at a particular -- and particularly terrifying -- moment in history. The Mongol hordes had sacked Baghdad, the longtime center of Islamic civilization, and were slaughtering their way through the Middle East. It was the first time Muslims weren't living under Christian or Muslim rule, a situation, notes Cyberfitna, that led 13th century scholars to radical interpretations, like lifting Islam's earlier bans on killing civilians or fellow Muslims.

The debate over what is "Islamic" and what isn't won't end, nor should it. In an age of so many competing voices claiming their rights to read and interpret the text for themselves, the debate grows more complex than ever before. And as we've seen from the havoc extremist readings have wreaked on city skylines and countless lives, more dangerous, too.

Carla Power is the author of "If the Oceans Were Ink: An Unlikely Friendship and a Journey to the Heart of the Quran." She writes for Time and was a foreign correspondent for Newsweek. Her writing has appeared in Vogue, Glamour, the New York Times Magazine and Foreign Policy, and she has earned an Overseas Press Club award and a Women in Media Award.