America's glaring double standard on terror: Why the Tsarnaev conviction is another black eye for Gitmo

A Boston bomber is found guilty, while a 9/11 mastermind still hasn't seen his day in court. Here's what it means 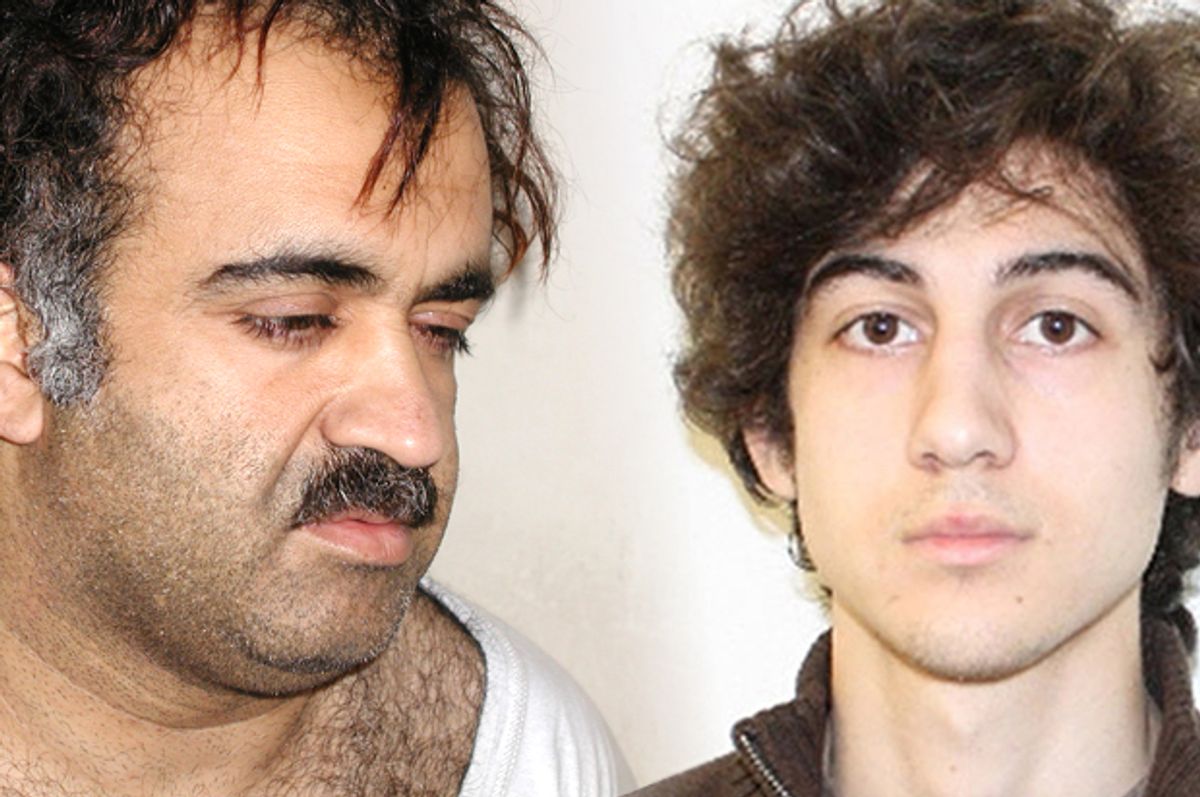 "Did the use of pressure cooker bombs," the jury in the Dzhokhar Tsarnaev trial was asked in several different ways on Wednesday afternoon, "cause the death of Martin Richard?"

"Yes," the jury declared Tsarnaev's guilt in the murder of Richard, the 8-year old boy watching the race from the finish line killed in Tsarnaev's attack on the Boston Marathon two years ago. "Yes," the jury said, over and over. The jury gave the same response when asked about Tsarnaev's responsibility for killing Lingzi Lu, a Boston University statistics student; Krystle Campbell, a 29-year old restaurant manager; and Sean Collier, an MIT cop, all of whom he and his brother killed. The jury found Tsarnaev guilty of all 30 counts against him.

The trial will now move into a sentencing phase where the jury decides whether Tsarnaev should be executed for his role in the biggest terrorist attack on U.S. soil since 9/11.

Now just imagine a similar process, had a jury called out Khalid Sheikh Mohammed's guilt in the murder of each of 2,976 people on Sept. 11, 2001.

"Anna Williams Allison; David Lawrence Angell; Lynn Edwards Angell," the indictment filed against KSM and four others in New York in 2009 started its list of the 2,976 people KSM murdered. "Olga Kristin Gould White," the long list ended. "Guilty," a jury would surely have found KSM and his co-conspirators, of the mass murder he has always admitted. Guilty, 2,976 times, plus the larger conspiracy to attack the U.S.

Of course, that never happened. Under pressure from Congress and New York politicians, the administration gave up its efforts to try the 9/11 attackers in civilian court in 2011, moving their trial back to the military commissions at Guantánamo Bay just over four years ago.

And in those four years, the trial against the perpetrators of that massive attack, committed more than 13 years ago, has gone nowhere.

Indeed, even as both sides were making closing arguments in the Tsarnaev trial this week, the Miami Herald's Carol Rosenberg reported that a hearing scheduled in the 9/11 trial for April 20 had been canceled, the third such hearing in a row to be postponed. This particular delay arose from an FBI investigation into the 9/11 defense attorneys, raising concerns about the attorneys' ability to adequately defend the accused, though details behind the delay remain sealed. There have been a variety of reasons for the delays in this and the military commission of accused USS Cole bomber Abd al-Rahim al-Nashiri, including concerns about the military chain of command undermining the independence of the judge and questions about how much evidence of the defendants own torture will be shared with them.

Civilian trials of terrorist defendants haven't entirely avoided similar challenges. Defense attorneys continue to complain that judges show the executive branch far too much deference when the DOJ asks to keep evidence secret. There have been concerns about the executive's ongoing role in detaining the suspects. In Tsarnaev's case, for example, defense attorneys repeatedly complained about FBI monitoring the conversations with their client. In addition, there have been -- and will be, during the sentencing phase -- questions about the delay in giving Tsarnaev a lawyer in the days after he was captured, though he asked for one. But even in the case of Ahmed Ghailani, who, like KSM and his co-defendants, was held by the CIA for years and tortured, an Article III judge was able to cabin off the torture of the defendant and still oversee a trial finding him guilty of conspiring to bomb U.S. embassies in Africa in 1998.

In the face of each of these challenges, civilian judges have issued their orders and, on occasion, defendants have appealed the orders (Tsarnaev's lawyers tried repeatedly to get his trial moved outside of Boston, for example). But given the long history of precedents behind each such decision, those appeals rarely hold up justice like the military commissions' repeated stalls.

Trying terrorist defendants isn't always easy, but the nation's Article III courts have developed a pretty good track record of doing so over the last decade and more. Compare that long track record with Gitmo's turnover --there have been seven convening authorities and six chief prosecutors since its inception. As the third (of six) Gitmo chief prosecutors, Col. Morris Davis reflected in a New York Times editorial recently, "If a professional football team was on its seventh head coach and sixth quarterback in less than a dozen years, that team would almost certainly be a loser."

The point is, civilian trials have more than proved capable of holding terrorists to account. And military commissions have shown little but failure, delay and the absence of justice for everyone involved.

Four years ago, sensationalist politics and a disdain for our long-proven justice system led a bunch of politicians to demand military commissions rather than the civilian trial DOJ's prosecutors had already prepared against KSM and his accomplices. Today's verdict in the Boston Marathon trial -- the beginning of closure and accountability for an attack that took place less than two years ago, even as the families of the 9/11 victims continue to wait -- is proof they were wrong.