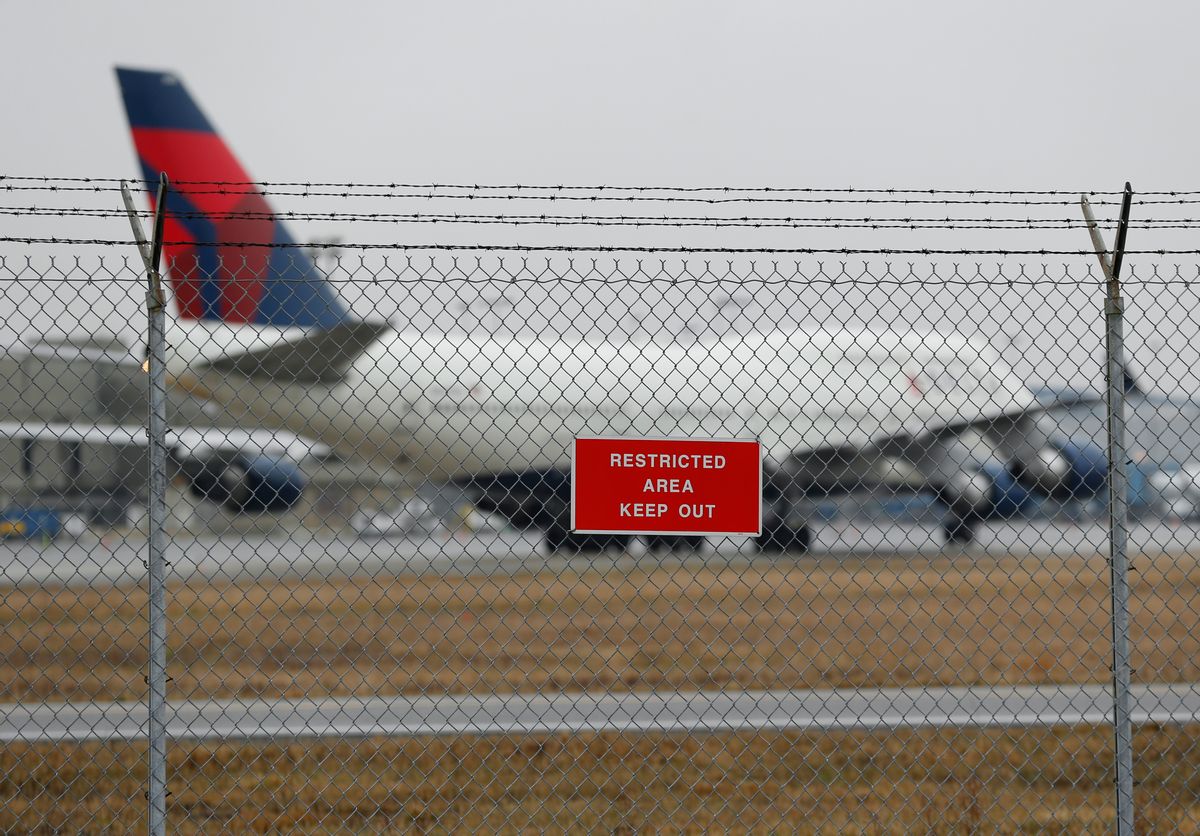 A sign is shown posted on a perimeter fence near Delta 747 aircraft taxiing at the Detroit Metropolitan Airport in Romulus, Mich., Thursday, April 9, 2015. The security fences and perimeter gates at Detroit Metropolitan Airport have been breached four times in the past two years, an Associated Press investigation shows. Nationally, at least 272 such breaches occurred at 31 major U.S. airports since the start of 2004. (AP Photo/Paul Sancya) (AP)
--

Several hundred times over the last decade, intruders have hopped fences, slipped past guardhouses, crashed their cars through gates or otherwise breached perimeter security at the nation's busiest airports — sometimes even managing to climb aboard jets.

One man tossed his bike over a fence and pedaled across a runway at Chicago O'Hare, stopping to knock on a terminal door. Another rammed a sports-utility vehicle through a security gate at Philadelphia International and sped down a runway as a plane was about to land.

At Los Angeles International, a mentally ill man hopped the fence eight times in less than a year — twice reaching stairs that led to jets.

An Associated Press investigation found 268 perimeter breaches since 2004 at airports that together handle three-quarters of U.S. commercial passenger traffic. And that's an undercount, because two airports among the 31 that AP surveyed didn't have data for all years. Boston's Logan and the New York City area's three main airports refused to release any information, citing security concerns.

Until now, few of the incidents have been publicly reported. Most involved intruders who wanted to take a shortcut, were lost, disoriented, drunk or mentally unstable but seemingly harmless. A few had knives, and another was caught with a loaded handgun.

None of the incidents involved a terrorist plot, according to airport officials.

The lapses nevertheless highlight gaps in airport security in a post-9/11 world where passengers inside terminals face rigorous screening and even unsuccessful plots — such as the would-be shoe bomber — have prompted new procedures.

"This might be the next vulnerable area for terrorists as it becomes harder to get the bomb on the plane through the checkpoint," said airport security expert Jeff Price.

Since the Sept. 11 attacks, hundreds of millions of dollars have been spent to upgrade perimeter fencing, cameras and detection technology. Many airports have dozens of miles of fencing, but not all of that is frequently patrolled or always in view of security cameras.

Airport officials insist perimeters are secure, and that an intruder being caught is proof their systems work. They declined to outline specific measures, other than to say they have layers that include fences, cameras and patrols. Employees are required to ask for proof of security clearance if a badge is not obvious.

Authorities said it is neither financially nor physically feasible to keep all intruders out.

"There is nothing that can't be penetrated," said LAX Police Chief Patrick Gannon, noting that even the White House has struggled with fence jumpers.

The AP's analysis was prompted by a breach last spring in which Yahya Abdi, 15, climbed a fence at Mineta San Jose International Airport, hoisted himself into a jet's wheel well and survived an almost six-hour flight to Hawaii. He had wanted to go to Africa to see his mother.

Through public records requests, news archive searches and interviews, the AP created the most comprehensive public accounting of perimeter security breaches from January 2004 through January 2015 at the nation's 30 busiest airports, plus San Jose.

— At least 44 times, intruders made it to runways, taxiways or to the gate area where planes park to refuel or load passengers. In seven cases, including Abdi's, they got onto jets.

— Seven international airports in four states accounted for more than half the breaches, although not all provided data for all years examined. San Francisco had the most, with 37. The others were in Philadelphia, Los Angeles, Las Vegas, San Jose, Miami and Tampa, Florida.

Airports are responsible for securing perimeters, and the Transportation Security Administration reviews their security plans, conducts spot checks and can levy penalties. The agency said that from 2010 through 2014, it issued $277,155 in fines for 136 breaches.

At a news conference called Thursday in response to AP's findings, the San Francisco airport spokesman said his facility had the most breaches because it disclosed everything, whether the breach was intentional or accidental. Spokesman Doug Yakel said the airport has beefed up security and that while its airfield is safe, "The goal is always zero" breaches.

U.S. Sen. Barbara Boxer, D-Calif., said she's been asking the TSA and airport officials since the San Jose case to "work together and resolve this alarming situation" and added: "Enough is enough, let's get it done."

Airports are supposed to inform the TSA of lapses, but the federal Government Accountability Office in 2009 found not all incidents were reported. In 2011, a TSA report counted 1,388 perimeter security breaches since 2001 at the 450 airports that TSA regulates.

The report isn't publicly available, and the agency declined to comment on AP's findings.

While many incidents were benign — two trespassers were skateboarders — other intruders posed greater dangers.

At the nation's busiest airport, Hartsfield-Jackson in Atlanta, three different intruders reached runways — in 2007, 2012 and 2014. One was an aggravated assault suspect who came within 50 feet of a plane that had landed as he was pursued by police.

In Philadelphia, Kenneth Mazik sped onto the runway in March 2012 as a plane carrying 43 people was about to land. Air traffic controllers told 75 aircraft to circle and held 80 on the ground. He faced a rare federal prosecution, spent 16 months in prison and paid a $92,000 fine.

Among the intruders, Christopher McGrath stands out. Eight times between April 2012 and March 2013, police caught McGrath after he got over the fence at LAX on a mission to board a flight. He is now at a medical lockup in Missouri.

Security firms sold $650 million worth of fences, gates, sensors and cameras to airports in the decade following the 9/11 attacks, according to industry analyst John Hernandez, though he projects spending will drop.

Officials insist that no technology solution is foolproof. Outfit cameras with software designed to help identify intruders, and there may not be enough staff to monitor images. Airports have to weigh the potential threat of harm against the hefty cost of building elaborate defenses, experts said.

"It's one of those issues that I think until something really bad happens, not much is going to change," Price said.