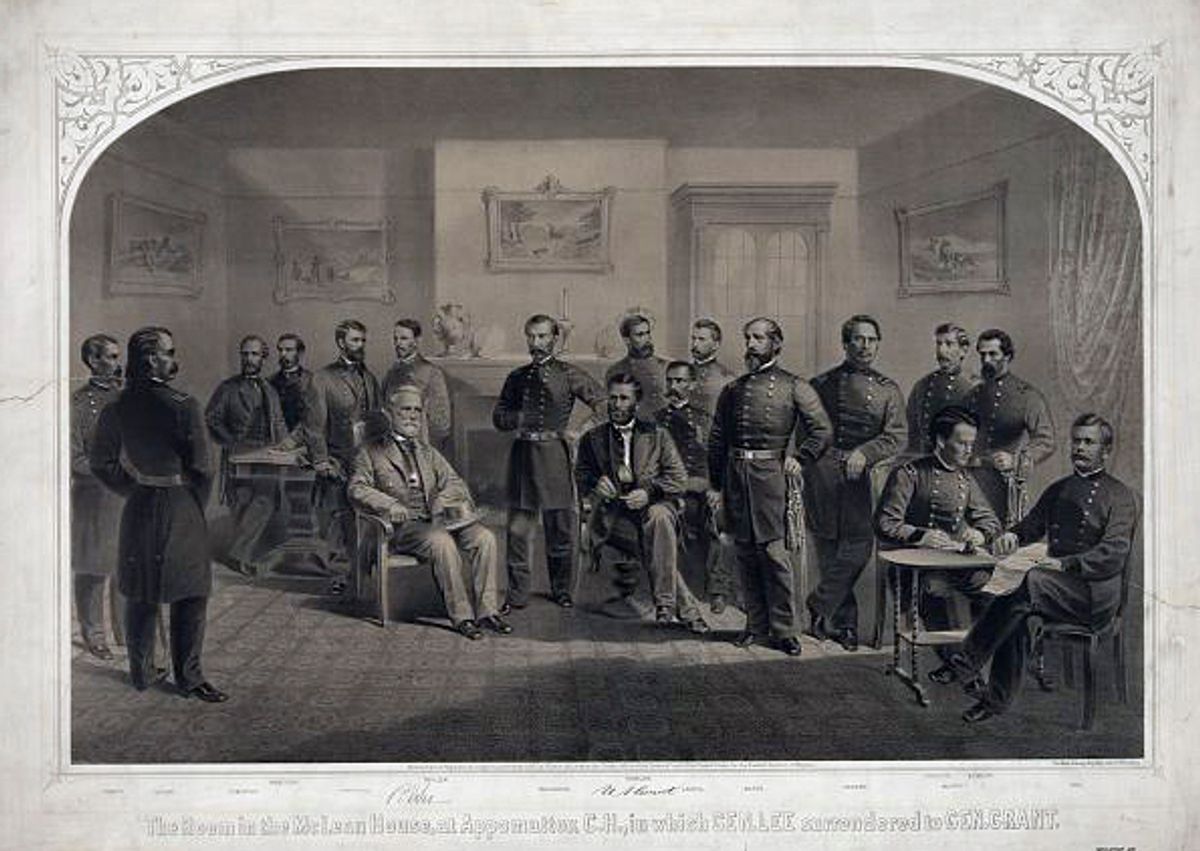 APPOMATTOX, Va. (AP) — The surrender of Confederate Gen. Robert E. Lee to Union Lt. Gen. Ulysses S. Grant 150 years ago on Thursday was a milestone event in the end of the Civil War. This is a rolling account of Thursday's commemoration of anniversary events that include a reenactment of Lee's last clash with Grant's troops and of the Confederate surrender in a Virginia farmhouse on April 9, 1865. Interspersed are historical accounts from 150 years ago:

Ahead of the battle reenactment, the boys of the Confederate 11th Virginia were as pretty a cool bunch as those portraying Union troops gathered several fields away at Appomattox Court House amid the rolling farm country dotted by brick buildings and white picket fences.

But a stoic Chris Ferree couldn't contain his excitement when asked about his role in the 150th commemoration of Lee's surrender 150 years ago on Thursday.

"This is an awesome place to be," said Ferree, a Roanoke resident. "We're all excited to be here."

The Confederate re-enactors were a ragtag, mismatched group of heavy wool coats, ill-fitting trousers and more types of hats than a haberdashery. Dozens stood along a rough wooden fence, their muskets at the ready.

The smell of wood smoke greeted the first of thousands of visitors thronging the park the next several days of commemorative events. The outline of Union troops in formation could be seen in fields as visitors approached.

Perry Miller of Salisbury, a re-enactor with the North Carolina 28th from Salisbury, explained the strategy succinctly: "We're trying to break through the Union lines."

Thomas Holbrook, a park ranger on loan from Gettysburg, went down the line of re-enactors for a quick briefing before battle.

"This is part of what I like to call the armistice that was signed on April 9, when Gen. Lee surrendered the Army of Northern Virginia," he said.

Lee's forces were in increasing disarray in the hours before Lee formally called it quits in April 1865. So the Associated Press reported 150 years ago this week. AP reported that ragged Southern soldiers, many straggling while running from federal forces, began giving up alone and in small bunches even before the official surrender.

Lee's forces, seeking an escape route, had crossed the Appomattox River while burning bridges, AP reported then. Union forces "attacked them vigorously" in the hours before the formal surrender, convincing Lee the fight was over. AP reporting from accounts as saying "the road for miles was strewn with broken down wagons, caissons, and baggage of all kinds, presenting a scene seldom witnessed on the part of Lee's army."

In a place where historically accurate fashions abound, the Rufeners of Ohio stood out.

Cousins by marriage, Kim and Mary Rufener carefully stepped through soaked turf and muddy roads at Appomattox to keep their hoop skirts mud-free. The two also wore bonnets as they watched Union and Confederate reenactors clash.

Amid the hundreds if not thousands lined along a fence watching a battle re-enactment, the two women drew attention as they posed for photographs. They talked about re-living history in period clothing.

"It just enhances the experience for us," Kim Rufener said amid booming cannons and the crackle of muzzle fire. "It makes it more alive. It's an important part of history that we need to remember."

Asked if the reproduction outfit had hampered her travels, Mary said, "Well, it is muddy." She modestly lifted the hem of her hoop skirt, revealing laced black boots that were slightly muddied.

The Rufeners have been to other Civil War commemorative events, but Appomattox was the first in period costumes. "This is a big deal," Mary Rufener said, adding "We won't be around for the 200th."

Many artifacts once used by Lee's fighting forces are preserved and many went on display at Appomattox Court House National Historical Park and a nearby museum. Those included Lee's copy of Grant's terms of surrender. There's also an inkwell from the farmhouse parlor of businessman and slave owner Wilmer McLean, the reluctant host of the surrender. The inkwell was taken as a memento from the McLean house by the brother of Union Maj. Gen. Phillip H. Sheridan. Of course, a trove of battle flags and Lee memorabilia are also displayed — even a gleaming sword Lee carried to the surrender.

AP's reporting described the waning hours for Lee's army: "After crossing the Appomattox the bridges were burned, and before our troops could get over the enemy had taken a position a mile from the river, where they erected works and made a stand in order to allow their wagon train to get out of the way ... The (Union's) 2d division, under General Crook, attacked them vigorously, driving them back some distance. But they had a force dismounted, lying in ambush, which poured a severe fire into our men as they advanced to the second attack, and they were compelled to fall back on their supports. The rebels soon after departed from this place, not being disposed to await another charge ... "

The National Park Service has 145 staff members helping with the commemoration, even a black powder specialist who watches after gun safety for the fighting re-enactments.

"He checks weapons to ensure they're safe and well-maintained, and also that there is no ammunition," explained Katie Lawhon, who came down from Gettysburg National Military Park to serve as a public information officer for Appomattox.

Appomattox is considered a plum assignment, she said. The 145 comprise what the Park Service calls an incident management team. Besides big events, they also respond to disasters, such as an oil spill on a National Parks beach or a natural disaster.

The Appomattox crew draws from 33 different units of the National Park Service, including parks and regional offices — many skilled in logistics and planning, medical services, law enforcement and resource management.