C'mon, feel the Chafee-mentum! Another bored white guy might jump into the Democratic race 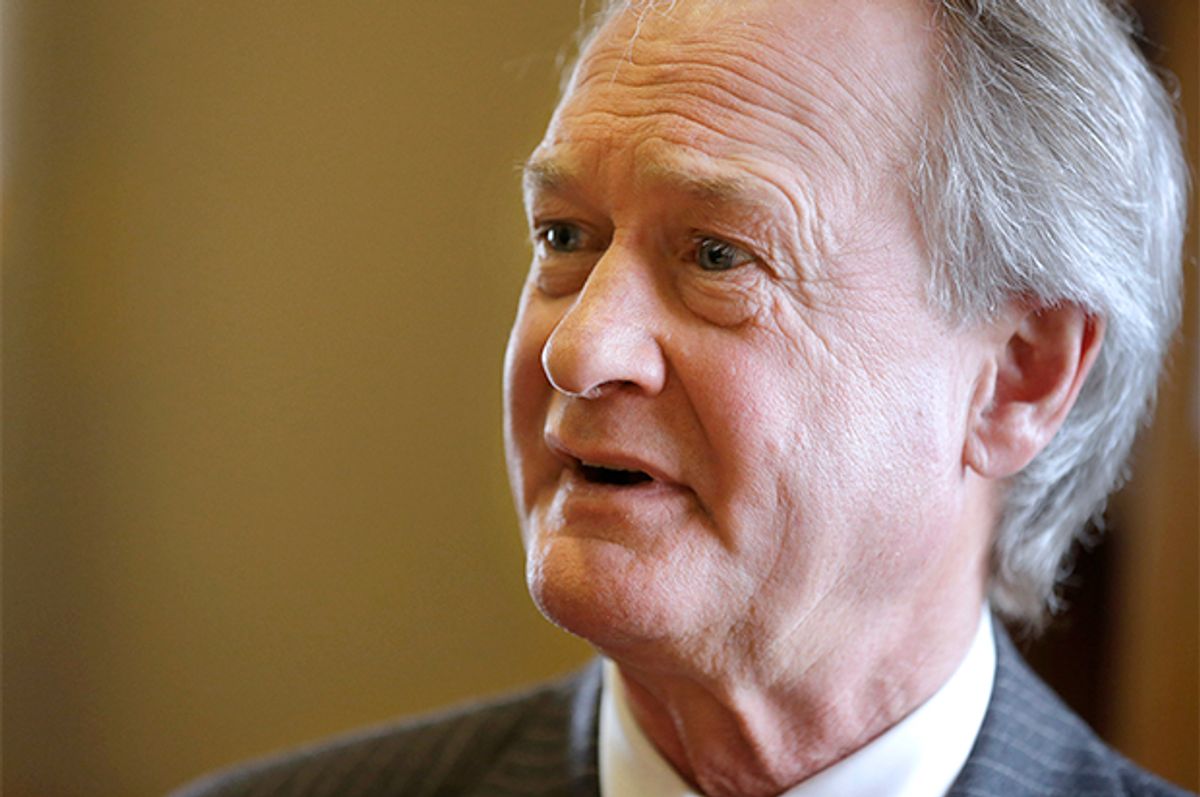 For you kids back home, that right there is Lincoln Chafee. He's formed an exploratory committee for the 2016 Democratic presidential nomination after a broad grassroots campaign of zero human beings on the planet urged him to jump into the race. (That's not entirely accurate: he does have the support of Senate legend Robert Byrd, a serious Democratic power player who's only been dead for five years. ) His slogan is a riveting "Fresh Ideas for America." May we suggest: Chafee 2016? Feel these nipples! Or some other lame "chafe"-related pun of his choice.

Chafee, to literally everyone's complete surprise, is joining Jim Webb and Martin O'Malley in the ranks of unemployed white men who have nothing to do so they might as well consider nabbing a percentage point or two away from Hillary Clinton and converting that into a deputy undersecretary position somewhere in her administration.

Lincoln Chafee served as a Republican senator from Rhode Island from 1999 to 2007. After a tough, impoverished childhood in the school of hard knocks (Andover academy, then Brown University), Chafee pulled himself up by his bootstraps and earned, by merit alone, a seat in the United States Senate. (His father died and the governor appointed Lincoln to take his place in the Senate, and then he won a full term in 2000.) He lost his 2006 reelection bid, became an independent, endorsed Barack Obama for president, won the 2010 Rhode Island governor's race, and became a Democrat near the end of his tenure. He decided not to run for a second term as Rhode Island governor, having already achieved all of his goals to universal acclaim. (He did not run for a second term because he was extremely unpopular, so much so that he probably wouldn't even have won his new party's nomination.)

Okay, okay, I'm being a jerk, but I have a perfectly good excuse for that: it's because I'm a jerk. Let's try to give Chafee a fair hearing. Is there any space for him in the 2016 Democratic presidential primary?

On foreign policy, there may well be. Chafee was the most liberal Republican during his time in the Senate, and he was the only Senate Republican to vote against the Iraq War. This fact is given prominent placement on his website, under the banner of "aversion to foreign entanglements."

The tragedies of the Iraq War are manifold; lost and injured lives, hundreds of billions of squandered tax dollars, the difficulty of providing just and proper care for our brave veterans, but maybe the most tragic, the loss of American credibility. I commit to the repair needed to all the harm done. Our credibility will be restored when we respect our world partners and truly listen when they speak. In a world of nuclear weapons, the United States must make international decisions with brains and not biceps.

If Chafee's on the debate stage with Clinton, he can make an argument that neither Martin O'Malley, Bernie Sanders, nor Jim Webb can make: He was in the very same Senate chamber as Hillary Clinton when this vote was held. He voted against it, she voted for it. (Bernie Sanders voted against it in the House, but that's not nearly as cool as voting against it in the Senate.) That required some courage, since he was doing so against a president from the same party.

But aside from offering another way of mildly annoying Hillary Clinton about her Iraq War vote, that's about all we've got when it comes to Chafee's utility in this race. Lincoln Chafee. Huh. Interesting. Best of luck? To him?