Paul thinks he can appease his antiabortion base while remaining the candidate of "personal freedom." He's wrong 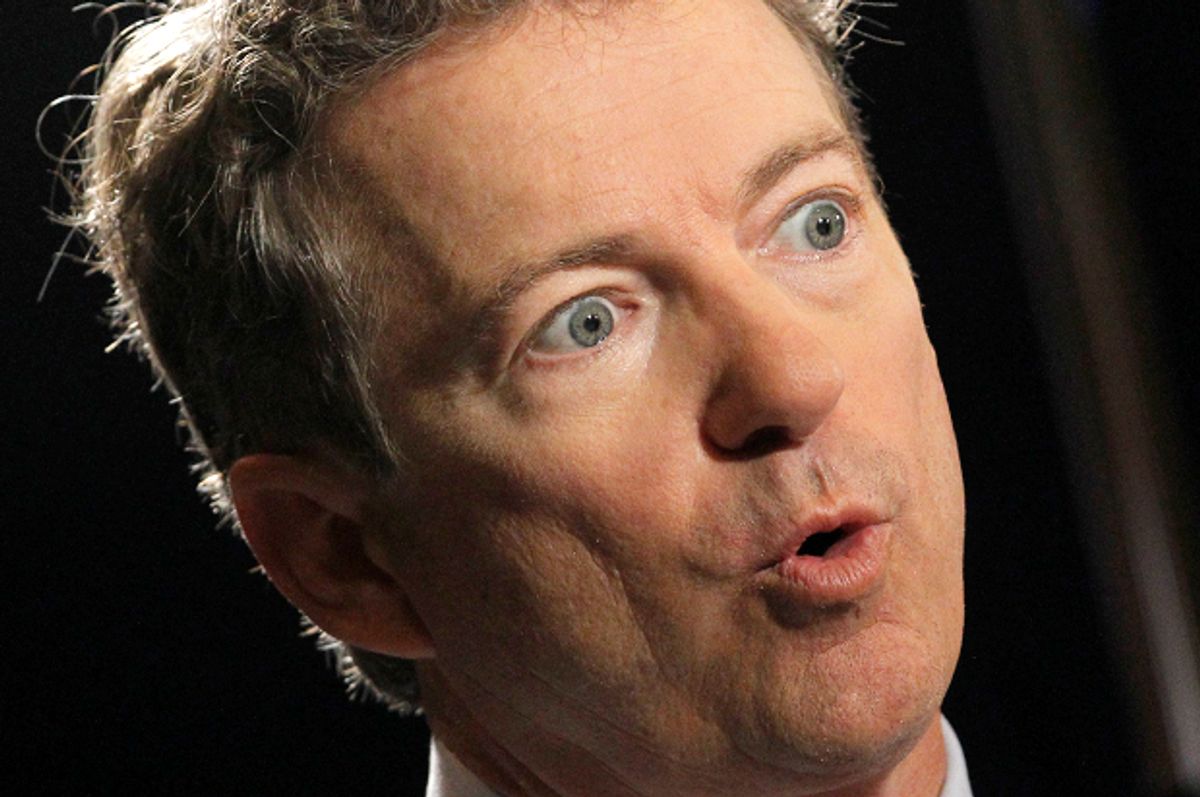 Rand Paul wants everyone to be a little more chill about abortion because life is complicated, so get off his back about it already. “The thing is about abortion -- and about a lot of things -- is that I think people get tied up in all these details of, sort of, you're this or this or that, or you're hard and fast [on] one thing or the other," Paul said during a Wednesday interview with the Associated Press.

Now that Paul has told us the thing about abortion, here is the thing about Paul: He is correct that polarized rhetoric and policy have virtually nothing in common with how most people say they feel about the procedure. But Paul is not one of those people -- and he makes laws and is running for president.

Paul may want to avoid questions surrounding his exact views on abortion exceptions because he’d prefer that his extreme record take a backseat to his image as a libertarian(ish!) rebel immune to party orthodoxies. But when it comes to his policy positions on abortion, there’s nothing tied up in the details -- Paul is as “hard and fast” as they come.

Paul gave his latest philosophical meditation on abortion in response to a straightforward question about what kind of exceptions he felt should (or shouldn’t) be made if the procedure were to be banned as a result of, say, the personhood measure that he sponsored. Pushed by Philip Elliot to give a more specific answer, Paul offered:

I've supported both bills with and without [exceptions], you know. In general, I am pro-life. So I will support legislation that advances and shows that life is special and deserves protection.

As a senator, Paul is firmly anti-choice, though he's right that he does tend to keep things fuzzy when asked if he believes that rape victims should be forced to carry their pregnancies to term. Paul has a perfect voting record with National Right to Life, the organization behind the the law that just effectively criminalized all abortions performed in Kansas during the second trimester. (That law, by the way, has no exceptions for rape or incest.)

And then there's his sponsorship of federal personhood legislation that would extend full legal rights to fertilized eggs, a move that bans most, if not all, abortion and could make certain forms of birth control illegal.

Because Paul’s personhood proposal holds that the full weight of the 14th amendment kicks in “at the moment of fertilization,” methods of birth control that may prevent implantation -- like the copper IUD when used as emergency contraception -- could become, as the New Yorker so bluntly put it last year, “weapons of murder.”

Paul likes to talk about debate and philosophy, but there’s little room for such nuance in Paul’s actual positions on reproductive freedom. The murkiness comes in when he’s asked to explain his voting record and policy priorities, which is when he tends to sound like more of a stoner than a red meat culture warrior. This isn't a new development, either. In a 2013 interview with CNN, Paul called his proposal to establish fetal personhood an "important philosophical discussion."

When pushed on the matter of exceptions, Paul said:

Well, I think that once again puts things in too small of a box. What I would say is that there are thousands of exceptions. You know, I'm a physician and every individual case is going to be different, and everything is going to be particular to that individual case and what's going on with that mother and the medical circumstances of that mother. [...] I don't think it's a simple as checking box and saying exceptions or no exceptions.

And just as he's dodged questions about abortion exceptions in order to put a moderate spin on an extreme proposal like personhood, Paul has been similarly evasive on whether he believes that birth control would come under new scrutiny as a result of such a law.

In Iowa last year, Paul said that Republicans have been unfairly portrayed as anti-birth control:

It’s been this narrative that’s come from the other side…somehow saying we’re some troglodytes who really are against birth control. There may be various opinions in here, but there’s probably almost nobody who wants to ban birth control. I haven’t heard any Republican politician who does.

Now, whether Paul’s stock response about birth control is just a dodge or if he genuinely doesn’t see how making a fertilized egg the legal equivalent of your neighbor Lisa from upstairs endangers access to basic reproductive care, people on both sides of the abortion divide have been paying attention. Paul wants to avoid being pinned down on rape exceptions and birth control while still building up the conservative antiabortion base he'll need to remain a viable candidate, and neither side is really buying it.

And the result of this balancing act can make Paul look, well, a little unhinged. After taking some heat on Wednesday for his evasiveness about rape exceptions, Paul snapped back, “Why don’t we ask the DNC if it's OK to kill a 7 pound baby in the uterus?"

Try as he might, Paul can’t be the candidate of “personal freedom” and privacy when he thinks they no longer apply the moment a person becomes pregnant. Paul is right that people in this country hold nuanced and often contradictory views about abortion. Many Americans aren’t “one thing or the other." But Paul is. He's as extreme a candidate as they come. He'd just rather not own up to it in the run-up to 2016.