Rand Paul's horrible week: Why this was one of the worst campaign roll-outs in recent memory

Sorry, Rand, but you can't cease-and-desist your problems away 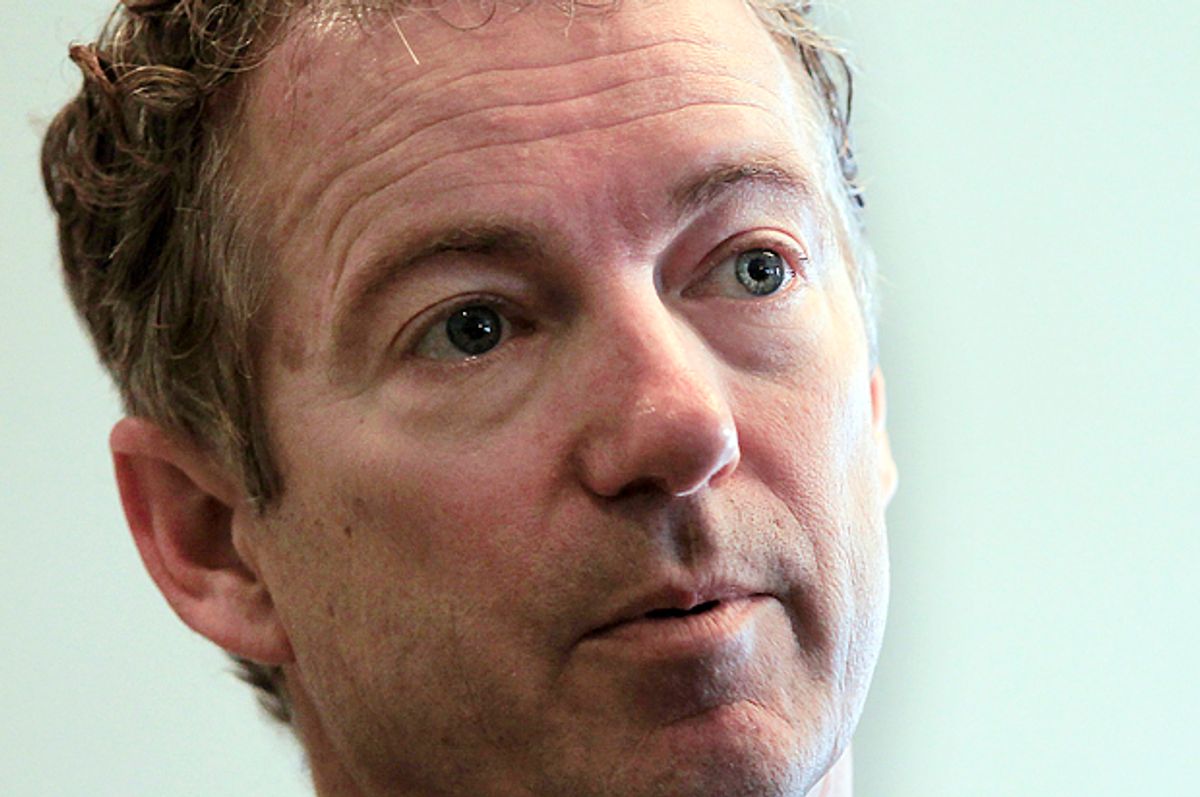 Rand Paul has had a bad week. It was supposed to be a great week – the “different kind of Republican” who is also “the most interesting man in Washington” finally became an official candidate for president! But ever since he made his candidacy official, Rand has been stepping on rakes and putting out fires. He snapped at a pair of reporters and lectured them on the proper procedure for interviewing Rand Paul. He got defensive on Iran and abortion and explained his peevishness away by acknowledging that he has a temper. At this point, Rand is probably eager for Hillary to get in the race just so reporters will have something else to talk about.

Now comes word that Team Rand has fired off cease-and-desist letters to local TV stations warning them to stop running an ad attacking their candidate’s position on the Iranian nuclear negotiations. The ad in question is from a shady group called the Foundation for a Secure and Prosperous America, which is run by one of the guys responsible for the Swift Boat Veterans for Truth. The Paul campaign argues that the group’s commercial “attempts to deceive voters regarding Senator Rand Paul’s position on U.S.-Iran relations through at least three false statements.”

Here’s the ad, which is worth watching just for the mushroom cloud at the end:

Objectively speaking, Paul’s campaign has a good case to make because the ad makes a factually dubious assertion. The problem with the cease-and-desist strategy is that it’s really hard to establish legally that you have been defamed, and the group’s spurious argumentation is based on a tiny little nugget of something that looks like truth if you squint hard enough.

The ad’s central claim is that “Rand Paul supports Obama’s negotiations with Iran, but he doesn’t understand the threat.” To the average conservative voter, “supports Obama” is the rough equivalent of “drowns kittens in boiling acid,” which is why Team Rand is so incensed by the ad. But the question of the ad’s falsity ultimately comes down to the meaning of “supports.”

The Foundation for a Secure and Prosperous America can argue that Rand has offered implicit support of Obama’s diplomatic overtures to Iran. In January, after Ted Cruz and Marco Rubio slammed the very notion of negotiating over Iran's nuclear ambitions, Rand shot back: “I’m a big fan of trying to exert and trying the diplomatic option as long as we can.” Rand Paul and his people are quick to point out that he’s been sharply critical of Obama for not doing more to include Congress when negotiating over Iran’s nuclear program. When the details of the proposed agreement were revealed, Rand’s team released a (long-delayed) statement that carefully avoided rendering judgment on the framework, but reiterated the senator’s belief that Congress must play a critical role in the process:

Senator Paul will be watching closely and believes any deal must make clear Iran cannot acquire a nuclear weapon, allows for full verification and is approved by Congress. He voted for sanctions both times they were put before Congress and believes only Congress should remove those sanctions.

Can you really argue from this that Rand Paul “supports” Obama on Iran? Not really, at least not in good faith. But is that “false” enough to get TV stations to stop running the ad? As of right now: no. The Sunlight Foundation notes that “it looks like the takedown move has failed, at least in Asheville and KCCI in Des Moines, where we spoke with a station manager regarding the ad. Public documents from WLOS, the Asheville station, show that Barry Faber, vice president of Sinclair Broadcast Group, which owns the station, ultimately decided the ad would run as scheduled.”

So Rand swings and misses again as he rolls out his 2016 campaign by picking counterproductive fights that don’t actually do anything to get his message out. Instead of prepping for the inevitable questions about how he’s evolved from a libertarian conspiracy theorist to a more mainstream “libertarian-ish” Republican, he chastised reporters for even asking and made himself look petty. A slimy dark-money group attacks him on a sensitive issue, and his response is to sic his lawyers on station managers to get them to stop running the “defamatory” ad. Clearly it doesn’t take much to throw Rand off his game plan, whatever that game plan is.