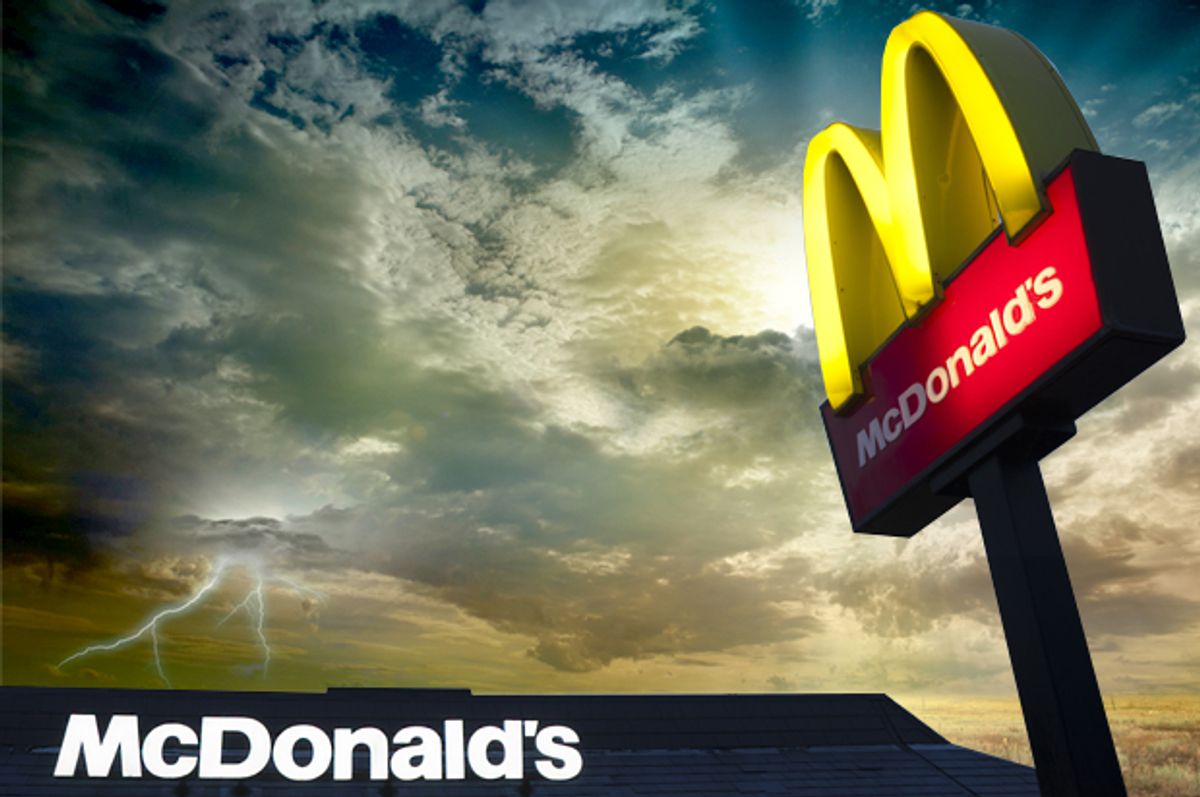 Despite the news that McDonald's plans to raise wages for 90,000 employees in the 1,500 U.S. eateries it owns and operates, the scheduled April 15 fast food workers' strike, which also will include home health care aides, airport workers, child care workers and Wal-Mart employees, may be the biggest such low-wage worker protest yet.  McDonald’s employee raise, it seems, was about as satisfying to workers as its food is to customers - as in not very.

The pay hike was too little, too late, and too limited: The approximately 10 percent raise is insufficient given the paltry, poverty-level hourly wage upon which it builds; was only announced amid persistent pressure and sustained negative publicity; and only affects about 11 percent of its total nationwide workforce, since McDonald's cannot dictate wages to the franchisees who own the vast majority of its U.S. locations.

The slow, small-scale reactions by fast food chains like McDonald's, as well as big box stores like Walmart, give the impression that their top executives thought the issue of unfair employee wages would have fizzled out by now, much like Occupy Wall Street.  But it hasn't, and it won't -- for a few reasons.

For one, unlike the Occupy movements, whose disorganization and overabundance of causes led to death by message dilution, the fast food workers have a singleness of purpose: significantly increased workplace compensation. “$15 an hour” is an easy, empathy-invoking message behind which to coalesce.

The second reason is simple necessity.  In post-industrial America, unionized, well-paying manufacturing jobs with advancement potential have been largely replaced by dead-end, often part-time jobs performed by workers who have no special skills and no representation -- and, because of that, no voice and no power. Within this sector is the fast food industry, where jobs once intended for mothers looking to supplement their husbands’ incomes, or for high school and college students who wanted some extra spending money, are now being occupied by Americans of all stripes who are looked upon to be breadwinners -- sources of primary income for themselves and, often, their loved ones.

These workers literally can't afford to stop fighting for fairer wages, because given the status quo, they can’t afford the bare necessities of living. For most, there are no viable alternatives because there simply aren’t enough well-paying low-skill jobs left in the country. So it’s either Wendy’s or welfare. Or, increasingly, it’s both.

That brings us to the third reason: The rest of us taxpayers.

A telling fact: Of the more than 47 million Americans currently receiving food stamps, tens of millions work full time. This is because their jobs at fast food chains such as McDonalds, Dominos and Taco Bell -- or at major retailers like Walmart, Target and Rite-Aid -- simply don’t pay them enough to support themselves. And, because these employers rarely provide adequate health insurance, millions of their workers also are enrolled in Medicaid, the healthcare equivalent of food stamps.

After decades of sticking strictly to their "by-your-bootstraps" script, even the business-uber-alles Republicans are beginning to realize that hard work isn't amounting to less handouts.  They are finally starting to understand -- or, more likely, to admit -- that the bootstrap-pullers and the handout recipients are, quite often, the exact same people.

The result is a brand of from-the-bottom-up corporate welfare. While the tangible, physical recipients of these subsidies are the working poor, the true benefactors are big businesses, who are only rewarded for -- and therefore encouraged to -- pay their employees unlivable wages. For corporate "welfare queens" like Wendy's, employees paid poverty wages are the real Value Menu.

Let's call this what it is: legalized robbery. The middle class is subsidizing slave wages. And hopefully, we’re getting tired of doing so.

Come April 15, a potentially unprecedented number of low-wage workers will show that the country is slowly wising up to the ruse propagated by right-wing media - namely, the tall tale that portrays welfare and Medicaid recipients as lazy loafers and swindlers.  Such nonsense only reinforces the middle-class, predominantly white fantasy that their comparative success is purely their own doing, rather than at least partially due to birthright.  This misplaced pride is nothing but insecure vanity and, often, less-than-subtle racism.

Let's help expedite this awakening.  The next time you hear someone grumble about America's "welfare state," extend your hand and say, “I wholeheartedly agree! Let’s end this corporate over-dependence on government safety nets.”

Then tell them how: by raising the federal minimum wage to a point where no American who puts in an honest day’s work needs to rely on food stamps and Medicaid just to exist in a nation that remains the world’s richest.

Christopher Dale writes on society, politics and sobriety. He has been published in The New York Post, NorthJersey.com, and The Good Men Project, and is a contributing blogger to TheFix.com. He can be reached through his website, www.ImperfectMessenger.us.