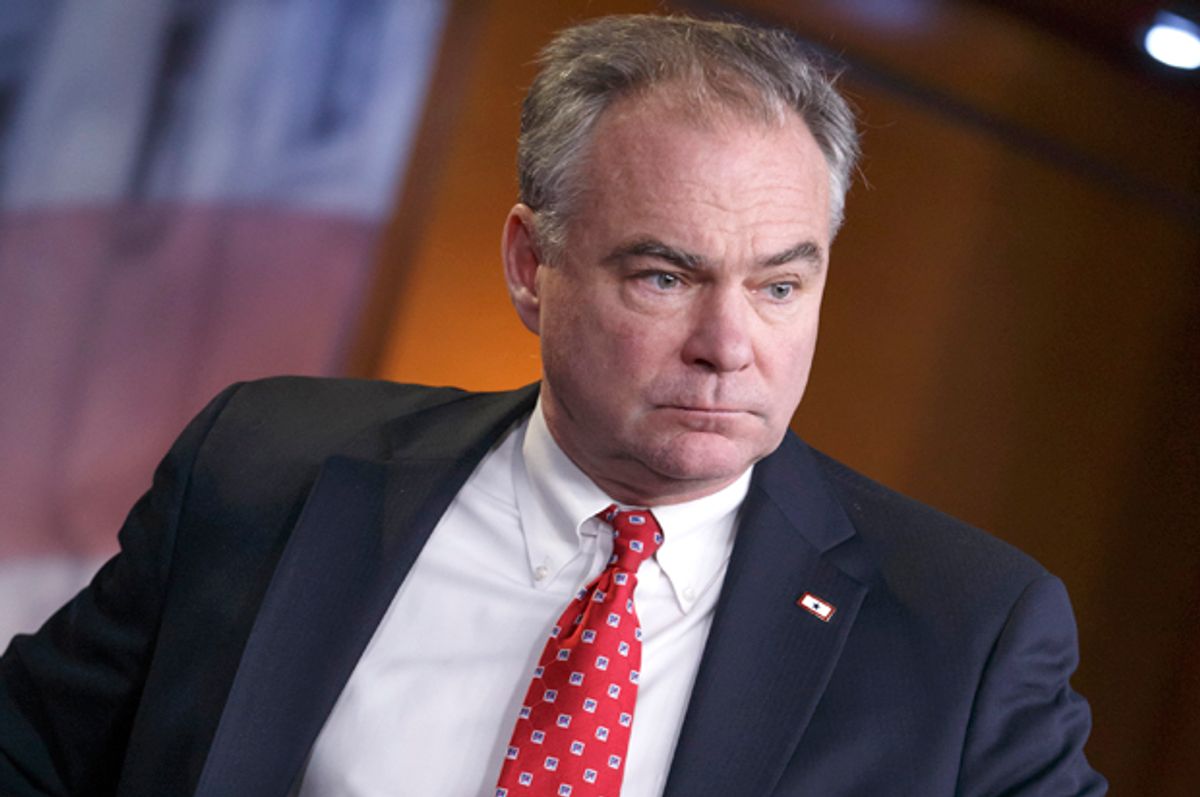 Now that Senate Democrats who support the Corker-Menendez "Let Congressional Republicans Screw Around in Bad Faith With the Iranian Nuclear Negotiations" Act of 2015 are facing some pushback ahead of next week's committee markup, Sen. Tim Kaine, one of its most prominent Democratic co-sponsors, is trying to defend the act.

The Virginia Democrat gave an interview to the Washington Post's Greg Sargent yesterday. The most reassuring argument he made was basically, don't worry, this bill that I feel very strongly about is completely useless. He explained that he and a number of fellow Democrats who support Corker-Menendez are also supportive of the diplomatic framework announced last week. So if Congress overrode the president's veto, some of those Democrats who supported Corker-Menenedez probably would not support a resolution of disapproval. The deal would be effectively approved through congressional inaction.

But the bill's endgame isn't as toothless as Kaine makes it out to be. He states flat-out that there is "zero chance" the bill will have a detrimental effect on the administration's diplomacy.

PLUM LINE: Are you saying there’s no chance that a vote on Corker-Menendez before the deal is done could have the effect of derailing the process, by, say, empowering Iranian hard-liners to say, “See? Congress won’t allow the president to keep his end of the deal”?

KAINE: There is zero chance that Corker-Menendez passing will harm these negotiations. Iran is very sophisticated. They want out from under Congressional sanctions. They’ve known from the beginning that Congress would be involved in that. The question is, What is the process that Congress will use? The letter from the 47 Republicans is engagement under a free-for-all. It’s much better to have Congressional engagement under a standard that is agreed upon and timely, and I think this is deferential to the administration.

The greater-than-zero chance of damage seems more likely because of how the bill disrupts the schedule for lifting sanctions. If Congress overrides a veto of Corker-Menendez, that restricts President Obama from suspending sanctions for a 60-day period. And guess what the Ayatollah over there in Eye-Ran was saying yesterday?

Iran’s supreme leader challenged on Thursday two of the United States’ bedrock principles in the nuclear negotiations, declaring that all economic sanctions would have to be lifted on the day any agreement is signed and that military sites would be strictly off limits to foreign inspectors.

As the New York Times points out, Khamenei's comments "could be tactical, intended to give both the negotiators and himself some political space to get hard-liners and others slowly accustomed to the framework of a deal." Indeed, they had better just be tactical if there's going to be any sort of deal.

But if the Supreme Leader of Iran is publicly thumping about the need for sanctions to be lifted immediately, and Congress responds by passing a law that prevents the president from lifting sanctions immediately, how's that going to look? Iran's conservatives can say that President Obama doesn't have control of his own government, and the United States can't be trusted.

Democrats on the Foreign Relations Committee do plan to introduce an amendment next week that either cuts in half, or eliminates altogether, the 60-day period. It's hard to see how such an amendment passes either in committee or on the floor, since it would require some Republican votes. Why would the Republicans who want to kill a deal -- which is to say, all of them -- vote to soften the provision with the best chance of achieving that?

Kaine's argument that it would be very hard to build a veto-proof majority for a resolution of disapproval is reasonable, although it makes you wonder why he feels so adamant about passing this legislation that wouldn't mean anything in the end. But even if there's slim-to-no chance that Congress would officially reject the agreement, Corker-Menendez isn't a de-weaponized vehicle.