"Gary would love to to be the first lady": Tony Hale on "Veep," "Arrested Development" and evolving beyond Buster Bluth 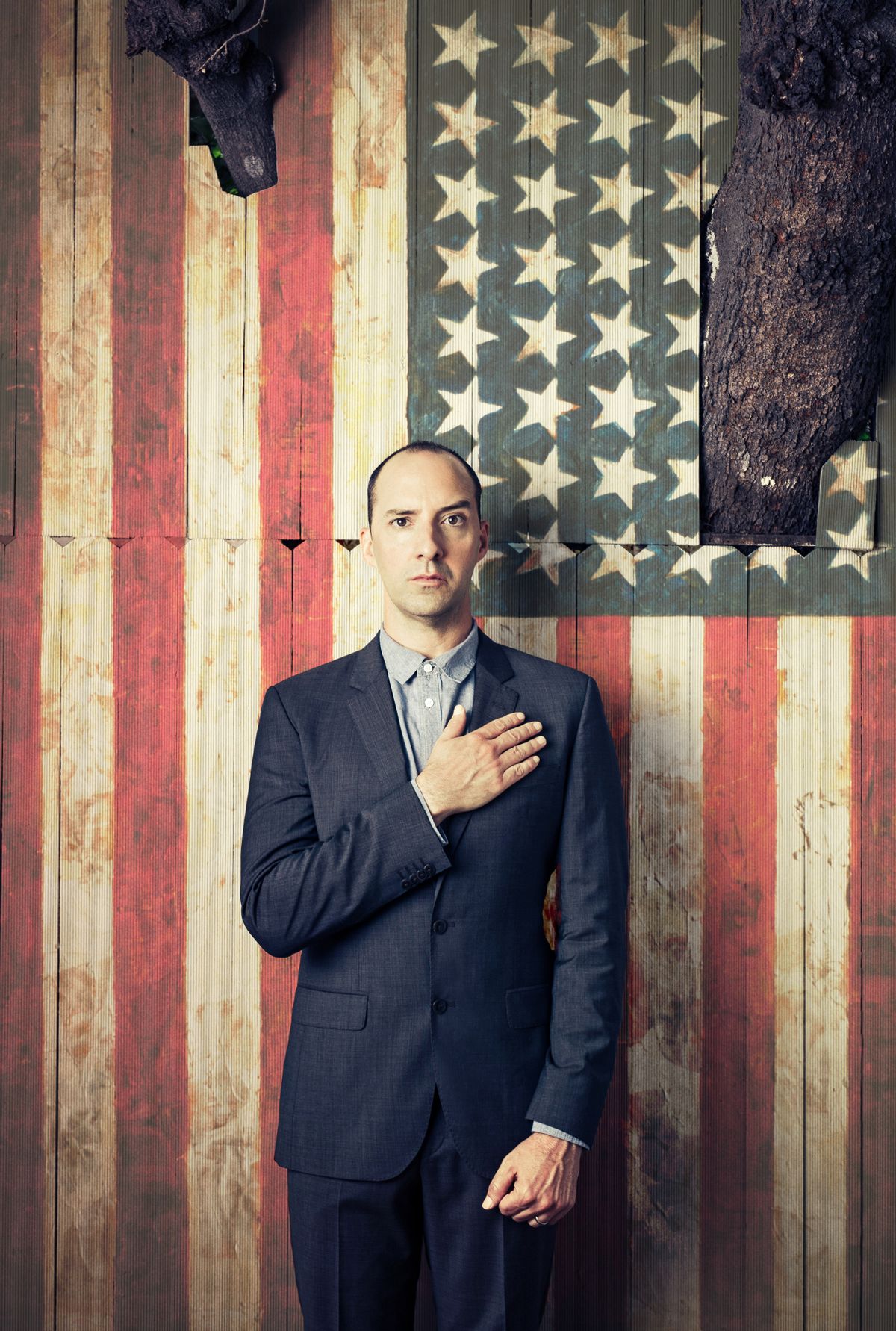 As the juice-loving, hook-handed man-child Buster Bluth on "Arrested Development," Tony Hale created one of the most indelible comedic characters in recent years. Yet while it might have seemed that Hale was destined to remain Buster in viewers' eyes forever -- he has said that people on the street still greet him with “hey, brother" -- somehow, Hale has done it again.

As President Selina Meyer's loyal bag-man Gary Walsh on "Veep," Hale is a scene-stealer amid a cast of standouts. While Hale's Gary -- a lovably eccentric, slavishly loyal beta male in the shadow of a strong woman -- certainly shares similarities with the character that made him famous, he never feels like a mere Buster redux (as Hale puts it, "Buster really would not go to bat for Lucille... Gary would go to bat for Selina").

We caught up with Hale via phone to chat about "Veep" Season 4 (returning Sunday!), his relationship with Julia Louis-Dreyfus in real life, and Gary's dependency issues.

So Selina's the president—

Right, and that's a big change for Gary. What do you think he's going through with this transition?

Trauma. I think his whole identity and his whole mental health is dependent on how close in proximity he is to Selina Meyer, so the fact that he doesn't have that much access is just emotional suicide to Gary. He doesn't know what to do with himself, he's lost all purpose in life, you know? He's just a spinning top. For the past however many number of years he's been attached at the hip with her; that's become his life goal and his identity, and now he just doesn't know who he is or what to do. He's losing his first love, or he feels like it... this is not an easy time for ol' Gary.

There's one nice moment where he's sitting in the "first lady window" looking down on her. I don't even know if that's a thing.

It's like a Romeo and Juliet moment. He's looking down, wherefore art thou, Juliet, just longing. If he can't be close to her, he will find a way to discover a window where he can peer into her life. It's a little psycho, it's a little voyeuristic and creepy. I think in Gary's world he'd love to be the First Lady. That's like his Nirvana.

He feels like it would really appeal to his skill set, maybe.

Absolutely. It's also to serve her and to make it as beautiful as possible and whatever she needs. That's his dream.

It's a relationship that's both satisfying and painful at the same time to watch. You know they have completely different conceptions of one another and you wonder how significant Gary really is to her.

I think in Gary's world, they're going to get married one day. In her world, I would question if she even knows his last name.

What is his last name?

Is that a shout-out to Matt?

[Laughs] You hear your character's name over and over and you kind of just get used to it. I think it was into the end of shooting the first season when there was a joke that he might be related to Matt... and I had never put two and two together. Like, no way! That's just an example of how slow I am.

What is your relationship with Julia like in real life?

She's pretty great. The thing is, we shoot the show in Baltimore and it sucks to be away from our families. But to be working with great people like Julia just makes it so much better because you kind of create this little community; it becomes this gypsy lifestyle where you create the world you're traveling in. They're all just so great and we get along so well and Julia... the thing is, she's obviously No. 1 on the call sheet and that can set the tone for the show. If you have a douchebag who's No. 1 on the call sheet, everyone's walking on eggshells and the creative energy is just sucked out of the room. She could not be more of a team player. She's kind, funny, just normal, and it sets a freely free, fun, great atmosphere to work in. We're all really thankful for that.

Is there a level of deference toward her on set?

I think we all obviously have huge admiration for her, but she doesn't put that attitude out, you know? If there is that there, you realize immediately how down-to-earth she is. She's so much more compatible and normal, really. Any kind of hierarchy that somebody might put on it with her or somebody else, it's just washed away because she gives off such an everyday vibe. She's funny but she's a human being. Her family is her first priority, not this business.

I know there's a lot of improv on the show, and that you guys rehearse the scripts once you get them. How does that work?

The writers aren't so precious with their words. They work incredibly hard on these scripts— like, really hard— and lay an amazing foundation, but they're not so tied to them. They hand them to us in rehearsals and just allow us to play with it, see where it gels and where it doesn't gel, and what morphs into something, and kind of allowing us to come up with our own bits. Then it just becomes something else. It's the same foundation but you never know where it's going to go, and that's a real example of how these writers are. We rehearse for two or three weeks before a shoot, which is really unheard of in television. That's such a gift. And once we start shooting it's pretty locked down, but the rehearsal time is the time to play and see what happens and laugh and come up with bits. That's really, really fun.

In the first episode, there's a great scene where the teleprompter cracks up while Selina is giving a speech, which Julia is just so amazing in.

It's heart-wrenching; just so hard to watch. Can you imagine? She's right there and all of a sudden it just goes blank... To her credit, she pulls through it. I would just go into a state of paralysis.

Was a lot of that improvised?

There was an article in the Atlantic recently about why the Brits are better at satire than the Americans, and it pulled out "Veep" -- which is inspired by Armando Iannucci's previous show, "The Thick of It" --  as an example of the rare show that manages to do edgy satire about U.S. politics.

I was a huge fan of "In the Loop" and "The Thick of It." It's really interesting to have someone else's perspective on our political system, just seeing what they see. I will say that thing about the insult vault, that you'll never see. They've got four or five passwords that they use and rotate through. It is just this world of put-downs; it is astonishing. What they call Jonah alone is just... astounding. It's amazing; it's like its own art.

What's so fun about this show is that the stakes are so high. The stakes were always high even when she was vice president, but the higher the stakes get... It just becomes chaos. This season, we have her as president but she should never even be near politics. It's just a recipe for disaster.

Just the fact that she's in charge of international diplomacy, oh my god...

It's over. She's the last person who needs to be stepping into that world and representing us. Of course, in Gary's world, she's the perfect choice; in Gary's world, the country is finally waking up to the queen and to who should have been in this chair the entire time. When she got nominated, he was like, uh, yeah! Finally, they're catching a clue.

I know you've talked a lot about the similarities between Gary and Buster. When you got cast for this part, was there a conscious effort to try and make the two characters different?

I definitely wanted to make it different. They happen to both have very powerful women that they cower to, and they both can be very emasculated and needy, but there's something about Buster -- talk about a state of paralysis, right? He's just completely shut down. With Gary, even though he does shut down, he steps up to the plate to defend his woman, and if anybody crosses Selina... Jesus. It's over. Buster really would not go to bat for Lucille; he says he would but he wouldn't. Gary would go to bat for Selina, you know? Gary would do what he needed to do. Look at what he's done for her: he's broken up with boyfriends for her. He'll do what he needs to do to please her, and that's fun and different to play.

Do you have a role you prefer?

They really are, in my eyes, so different. Buster's almost a 7-year-old trapped in a 40-something-year-old body, whereas Gary just needs a really big hug. Playing them feels very different, even though on the outside it might not look that way.

I think it's fair to say that "Arrested Development" and "Veep" are two of the greatest sitcoms in recent years. Are you just lucky, or do you have the best taste ever?

I wish I could say that... [laughs] I feel like I say this a lot, but I'm just so happy I have a job. To be working as an actor is still astounding to me. There were several years between the jobs where I was doing various gigs and looking for work, and then this came along. Here's the deal: just having a job, in general, I'm so thankful for. But to be on two jobs that I myself am a fan of, that's like, what? It just feels like such a gift. I really don't know how this happened, I'm just incredibly thankful. I really am.

And, I've gotta ask -- I interviewed David Cross and Alia Shawkat a while back, and I asked them the same thing -- have there been any developments on "Arrested Development"? [Editor's note: After the interview was conducted, producer Brian Grazer told Bill Simmons that 17 new episodes were in the works.]

I want to hear everybody's else's answer. I genuinely don't know, but what I do know is what I loved and continue to love about "Arrested Development" is the element of surprise. Where you have no idea what's in Mitch Hurwitz's brain, where he wants to take Buster or Tobias or Maeby or anything like that. I remember when we were shooting, "Arrested," I think I had an idea once of Buster doing "Dancing With the Stars" or something crazy, and I thought it was hilarious, and I remember telling Mitch and he was like, haha, that's a funny idea but then he came up with something so much funnier. He is so good at what he does. I don't want to know where he takes it, because I know everybody's on board but I also have no idea what they're thinking. I just genuinely don't know. I get all my news from the Internet, so you'll find out when I do. If you do hear, please call me!