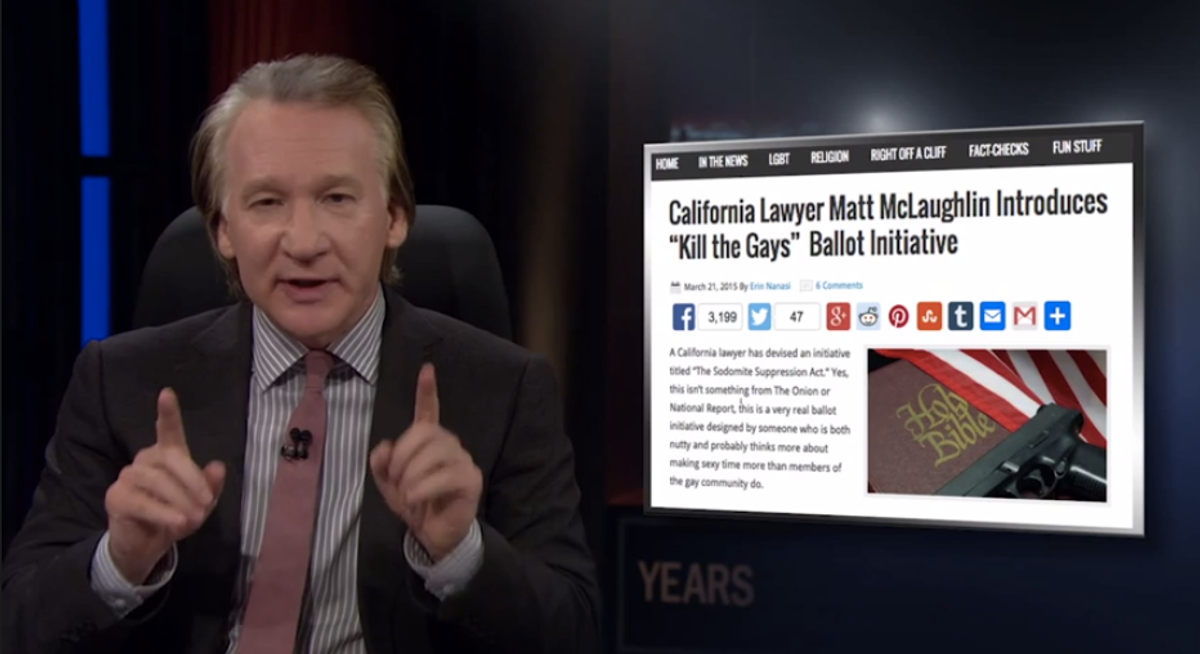 "The root of this problem is that more than half of all Americans still believe the Bible is the actual or inspired word of God," Maher said, of the Indiana bill. "But now 55 percent also support gay marriage, which must be very confusng.

"On the one hand, God has clearly spelled it out: he hates fags. But you like your gay neighbors Rob and Larry! But the Bible tells you to kill them. Yes, it literally says kill them. What to do?"

Maher was just getting started, as he went after the "Kill the Gays" initiative proposed by a California lawyer named Matt McLaughlin, and urged people to take fundamentalists at their word when they say insane things. Then he pivoted to the Middle East.

"As batshit as this asshole is," he said, referring to McLaughlin, "just imagine if there was a whole country of Matt McLaughlins. Well, there is. It's called Saudi Arabia. It's called Iran. It's called Pakistan. In many Muslim countries you wouldn't have to work hard at all to get signatures on your kill-all-the-gays ballor initiatives. In 10 such countries its already the law. Because they have crazy scripture too."

He concluded: "People say ISIS hijacked Islam. Actually the opposite is true. Religions do have hijackers but the hijackers are the moderates -- and I thank atheist God for them. They're the ones who took a Sharpie to the Bible and redacted all the crazy parts until there was almost nothing left to read -- like an email from Hillary Clinton."

Watch the entire clip below.