A museum can be worth as much as an oil field, provided there is someone willing to buy looted and smuggled art 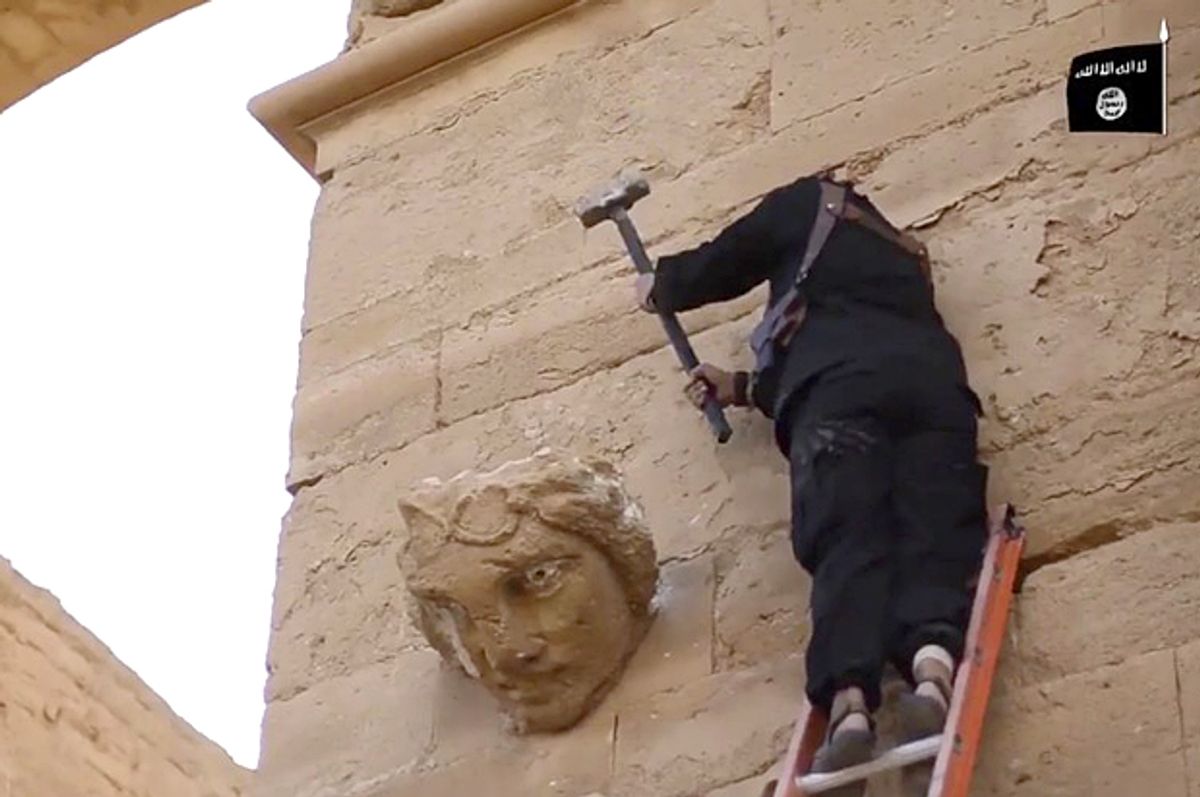 The term “tomb raider” brings to mind a scantily clad video game heroine before most people associate it with black-clad fundamentalist terrorists.  But the people who illegally excavate archaeological sites rarely wear daisy dukes while brachiating their way, vine to vine, across subterranean chasms.  The world of antiquities looting has crossed into the realm of terrorism—the ancient pot you buy on eBay, or at a prestigious auction house, might be funding jihadists.

The union of art and terrorism is nothing new.  In the 1970s, IRA operatives stole art on several occasions from Irish private collections, in order to sell or swap for the release of political prisoners.  In 1999, Mohammed Atta, one of the masterminds behind the 9/11 attacks, flew to Germany with photographs of looted Afghan antiquities, which he sought to sell in order, in his own words, “to buy a plane” that would have been crashed into American buildings.  Just a few weeks ago, ISIS bulldozed the ancient Assyrian city of Nimrud and smashed statues at a museum in Mosul, destroying pre-Islamic monuments and artifacts, while news filtered out that they were earning “as much as tens of millions” by selling antiquities looted from territory in occupied Syria alone, to foreign buyers.  Just days ago, terrorists stormed a museum in Tunisia and killed everyone they found inside.  Stolen art and looted antiquities fund terrorist groups.  So why has it taken so long for the world to take this seriously, or even notice?

Of course, this is old news to those of us who study art crime.  As early as 2005, U.S. Marine Col. Matthew Bogdanos and colleagues presented evidence, much of it still classified due to active operations, at the annual Interpol conference in Lyon on stolen works of art, that terrorist groups were funding their activities by selling looted antiquities abroad.  At the same meeting, it was announced that art crime was perhaps the third-highest-grossing criminal trade worldwide, behind only the drug and arms trades.  This was also the year when Der Spiegel broke the news about Mohammed Atta trying to sell looted antiquities in a precursor to the hijacking plan for 9/11.

But it is only now, 10 years later, in 2015, when ISIS, with their savvy terror-marketing videos of executions of people, statues and monuments, that the world has taken proper notice.  ISIS’s activities are just the latest chapter in the story of art and terrorism, which often mixes the idea that certain artworks have a corrosive influence and must be destroyed, with the recognition that this artwork has high value for collectors who love it, and can be sold.  ISIS accepts the value of antiquities but also destroys them, finding it unacceptable for non-traditional, non-Islamic art to exist within its territories of conquest.  This lack of logic sounds spookily similar to the indecisive Nazi theories on “degenerate art,” stealing as much as they could, selling as much of that as they could (much of it to prominent American and British collectors, who passed cash to the Nazi war effort), and burning the rest in bonfires.  The art they didn’t like was to be destroyed, unless they could profit from it.  Even more macabre, this attitude to art ran parallel to Nazi views on concentration camp victims—those of “lesser races” were not killed outright, but put to work and used as an economic commodity, as long as they could reasonably be sustained, before being killed or allowed to die off.  It is an easy pairing to see ISIS and Nazis as peas in a pod: the former obsessed with a warped interpretation of a real religion, the latter having cobbled together their own pseudo-spiritual amalgam of white supremacist beliefs.

If experts have known about art funding terrorism for at least 10 years, why is the media talking about it only now?

Three momentous things happened just weeks ago, in the fight against terrorists and the theft and destruction of art, both in direct reaction to ISIS's YouTube-friendly videos of iconoclasm (the destruction of art and monuments for symbolic reasons).  First, Ahmed Al-Tayed, grand imam of the Egyptian Islamic Institute Al-Azhar, issued a fatwa forbidding the destruction of ancient artifacts.  The Anglophone world is used to hearing about fatwas calling for murders, like the one issued against author Salman Rushdie, though the term simply describes a learned interpretation of Islamic religious law in the form of a decree, a spiritual parallel to a Supreme Court ruling on interpreting the U.S. Constitution.  Here was a decree from the “foremost authority of Sunni Islam,” prohibiting the destruction of artifacts.  As Al-Azhar declared in its official statement, “These artifacts have important cultural and historical significance.  They are an important part of our collective legacy that must not be harmed.”  The statement went on to point out ISIS’s hypocrisy, on the one hand selling ancient artifacts for enormous cash profit, on the other destroying them on principle as non-Islamic “idols.”  Second, the United Nations Security Council unanimously passed Resolution 2199, which condemned ISIS, al-Qaida and other terrorist groups for using “the looting and smuggling of cultural heritage [as a means to fund] recruitment efforts and strengthen their operational capability to organize and carry out terrorist attacks.”  This was quickly followed by G-7’s Financial Action Task-Force announcing that ISIS might “have earned as much as tens of millions” by selling antiquities looted from Syrian territory alone, to buyers abroad.  And just days ago, terrorists entered a museum in Tunisia and shot everyone they found inside who did not look like one of them.

The reason for the delay in links to art and terrorism being taken seriously has to do with statistics, or lack of them.  There are tens of thousands of art thefts reported each year worldwide, and far more go unreported.  Particularly, instances of antiquities illegally excavated are nearly impossible to monitor, because the objects extracted from ancient tombs have never existed before for modern humans—they were last seen when they were buried, perhaps thousands of years ago.  So no one knows what was pulled out of the ground by tomb raiders—authorities might not even find the empty tombs or sites.  So we really have no idea of the scale of the problem, only that it is indeed vast.  With more anecdotal evidence than empirical, authorities have taken a “maybe—let’s see” approach.  But ISIS’s P.R. savvy has made the problem impossible to ignore, whomping anyone with a computer screen on the head with videos of grotesque devastation, to people and artworks.

The extent of the damage done to Nimrud this March is impossible to tell.  It may be that ISIS made a show of demolishing a portion of the ruined city, and left it at that, as it seems they did at the museum in Mosul—just enough to inspire terror, like their hostage execution videos.  Never mind the loopy logic of blaming a civilization that flourished some 2,000 years before the birth of Mohammed, and whose DNA was likely woven densely into the fabric of the Prophet’s, for failing to be Islamic.  That’s like destroying a Gutenberg Bible because it was not in a Kindle.

If it can be said that there is a thimble-full of lemonade to be made out of the ISIS bagful of lemons, it is that their focus on high-visibility targets for their activities has made protecting cultural heritage, and keeping saleable antiquities out of terrorist hands, a priority.  So, now that we have governmental attention, what can (or should) be done?

The first step is to stop buying antiquities from ISIS-occupied territories.  Period.  Unless an object has a documented history of having been legally excavated and exported decades ago, it should not be touched with a 10-foot pole.  That may seem painfully obvious, but no terrorist would be able to turn pots and statues into cash unless there was someone handing cash to them in exchange.  Armies already map out culturally sensitive zones to preserve, whenever possible, to avoid collateral damage while fighting.  But such sites should likewise now be targeted for protection. Local guards should be posted at known archaeological sites and museums—studies have shown that trained, reasonably paid locals make for the best security in such situations.  While debates continue as to whether such guards should be armed, in situations like the recent Tunisian museum attack, it was the fact that the armed guards were absent (one hadn’t shown up for work, another was on break) that the assailants were able to waltz into the museum at all.  One wonders what would have happened if the guards had been in place.  The main lessons are to protect cultural heritage sites as you would any high-price, saleable commodity that you do not want to fall into terrorist hands.  A museum can be worth as much as an oil field, provided there is someone willing to buy what has been stolen from it.  Which brings us to the second point: stop buying anything that could have come from terrorist-occupied territories.

Whether the concern is the preservation of cultural heritage from obliteration, or keeping cash from its sale out of the hands of terrorists, art, antiquities and monuments must be protected.  It is not just the art that is at stake.