2016's "Shakespearean" tragedy: Marco Rubio and Jeb Bush might not be friends anymore!

Jeb Bush and Marco Rubio have been super good friends, but now that might end -- and everyone's sad 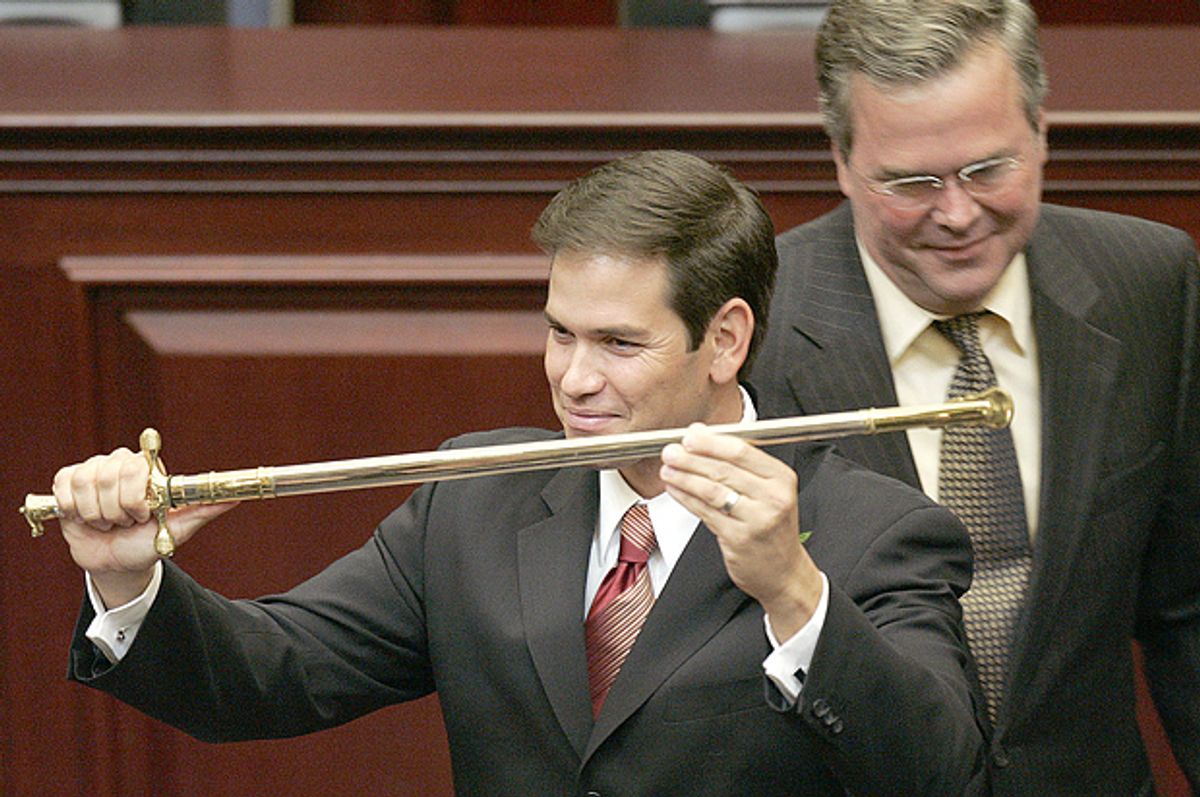 It is a tragedy of Shakespearean proportion! "Shakespearean," that's the New York Times' word, because of course it is, to describe the relationship between Jeb Bush and Marco Rubio. "Mr. Rubio’s plan to enter the presidential campaign here on Monday, upstaging Mr. Bush in his own backyard," the Times writes, "signals a decisive, Shakespearean turn in a 15-year relationship so close, personal and enduring that friends describe the two men as almost family."

Well... sure. Marco Rubio and Jeb Bush had a lot of common interests for a long time, so they helped each other out along the way. But the Times makes it sound like they've been covertly smooching on the regular for a while. ("Mr. Rubio was sworn in as speaker, Mr. Bush insisted he hold an elaborate ceremony in which the governor playfully handed him a sword that he said symbolized their shared conservative values." Ow ow!) They live "two and a half miles apart," as though that's somehow unusual for people from the same major metropolitan area. Now it is 2015 and they continue to have a mutual interest in the presidency of the United States, but at the same time.

The people who may not be able to deal, though, are the legion of Florida Republican political operatives who have hitched their careers to the advancement of these two gentlemen. Look at them whine about how terrible their lives are now that they have two very viable presidential contenders down the street to choose from. Wrenching. Just... just awful.

For the hundreds of Florida lawmakers, donors and operatives who know them both, the situation is discussed with funereal dread.

“Nobody thought it would come to this,” said Dominic M. Calabro, president of Florida TaxWatch, an advocacy group.

“I’m not going to lie,” said Ana Navarro, a strategist and fund-raiser. “It gives me a lump in my throat.”

The Washington Post has another piece about how Florida Republicans are having to "pick sides." And again, there are the same hilariously emotive quotes from political operatives, who famously have no emotions.

“It’s a massive decision that I can’t even begin to think about,” said Nelson Diaz, chairman of the Miami-Dade County Republican Party, a position once held by Bush. “I can’t imagine how difficult a decision it would be for some people.”

By the sound of things, neither candidate is going to do especially well in Florida, because all their Florida Republican friends will have killed themselves, such was the depression they spiraled into when faced with this choice of meal ticket.

I don't mean to make fun of their sadness (yes I do) but something tells me they'll have a much easier time picking their horse once the campaign unfolds and it becomes clearer which one is more likely to win. If Marco Rubio, who's announcing his campaign later today, gets out on the trail and proves incapable of handling the spotlight, you'll see the eyes of Nelson Diaz from the Miami-Dade County Republican Party dry up right quick. "I've always been a Jeb man," he'll say. "Rubio's a scumbag!" If Jeb Bush, who hasn't run for office since 2002, gets out on the trail and farts around like a confused old has-been, trying to smash the "camera phones" of everyone who records him at an inopportune moment, then Dominic M. Calabro of Florida TaxWatch will suddenly show up shirtless at a busy intersection with "RUBIO!" painted vertically on his chest.

For Jeb and Marco, having to say some mean things about each other isn't their major concern. It's that they're more or less the same candidate, in terms of the "lane" they're looking to occupy. They will each have plenty of business-community money, they each have a history of being amnesty-curious, they each love firing teachers and privatizing education. They each like to stroke their chins, murmur "...perhaps a tax credit?" after a long pause, and fancy themselves leading intellectual wonks. What should be troubling them about running simultaneously is less that they'll rupture a friendship and more that they'll cancel each other out.