"I've got a hot hungry mouth" is now high art: Grindr gets the opera treatment

The creator of "Grindr: The Opera" talks to Salon about the technology leading a rapid shift in gay culture 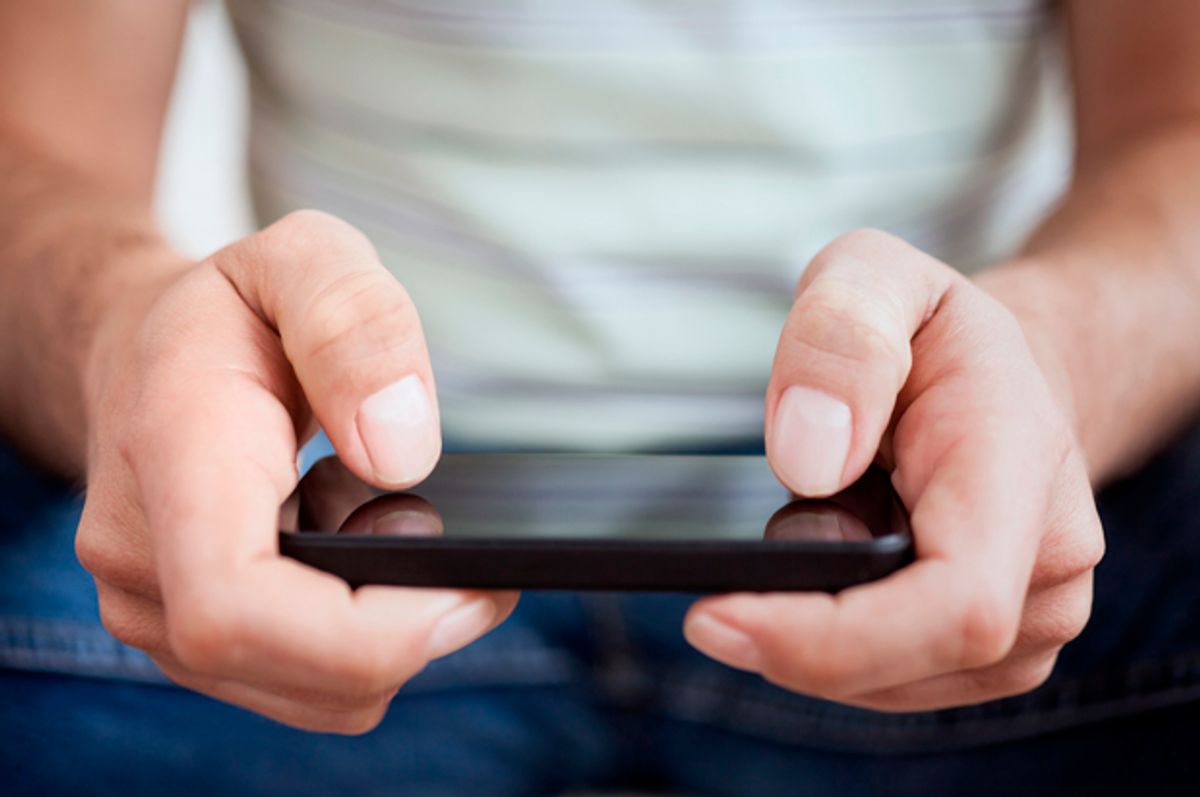 Despite the show's name, the songs tend more toward pop and rock. But the story line is very much true to the title: It follows four gay men as they use Grindr for different aims. In addition to Jack, there's Don, a closeted businessman  -- "I’ve got a good career, a summer house, a boat, a wife," he sings -- who seeks out "barely legal" boys and isn't afraid to pay them for their services. And then there's Devon and Tom who use the app for a hookup that turns into a full-fledged relationship. There's also Grindr itself, which is personified by a seductive drag queen with platinum blond hair wearing a mask in a gesture to the app's logo. It's campy, to be sure, but it also has weighty aims. As the show's website says, "Though the opera lives in the world of parody, it touches on some very serious, hot-button issues that exist in the gay community as it transitions into a time of wider acceptance and easy access to opportunities of both romance and lust to be sated."

I spoke with the show's writer, Erik Ransom, about his own Grindr experiences, how the app has changed the hookup culture and what it means for gay relationships.

Where did you get the idea for this script?

I actually got the idea from Manhunt.net, years ago, before Grindr existed. I had a lot of friends who were on that site and I dabbled in it to see what it was all about and some of the profiles were so striking to me. Some were funny, some were tragic. I just had the sense that there was opera in that. I started writing that and, as I was halfway through it, it occurred to me that it was sort of obsolete because of the app culture that was growing. The big thing at that point was Grindr, so I tried to figure out how to adapt the show so it still worked. I realized that Grindr could be a character. In the show, Grindr is played by a drag queen countertenor and acts as a siren from mythology, luring men to their sexual dooms.

Is that how you see Grindr, that it's luring men to their demise?

I have complicated thoughts on Grindr. I don't think it's a bad thing. I am an active user of Grindr. I think there are a lot of different people looking for different things and for different ways to connect to the human experience. Sometimes those work out beautifully and sometimes those work out tragically. That's what we try to portray. There are people who at the end of the show, looking for whatever they're looking for, who find it or find disappointment and frustration.

You said you found stories on Manhunt that were tragic and also hilarious. Can you give examples?

The funny stuff escapes me. You see that kind of stuff all the time nowadays; there are BuzzFeed articles of the funniest Grindr exchanges and that kind of thing. I remember there's one where someone just writes the word "near" and then someone responds "far, wherever you are" with a picture of Celine Dion. That sort of thing.

Yeah, so one of the characters in the show is on Grindr searching for positive guys to hook up with. He wants to contract HIV. Can you explain that plotline?

There are a lot of different reasons for why someone becomes a bug-chaser. The line that I pursue in the show is someone who feels sort of lost and out on his own and he feels like contracting the virus will give him a community that doesn't exist in his life. He feels there's a world that's closed off to him and if he gets HIV, he's going to find somebody who wants to be loved but feels like they're not gonna get anyone else because of the virus.

Here in the city there are a lot of homeless youth who turn to bug-chasing because of the housing subsidies and free healthcare they can get as a result. It's a fascinating symptom for something I think is great -- I think it's great we have those opportunities for people who are suffering with HIV. Of course, these people are a small minority of the broader populace who benefit from that. I would not criticize the city for pursuing that, but it's an interesting side effect.

I would also stress that that segment of the show is a very small part. The show is not about that community. It's about relationships and how they are changing as a result of the app culture that's burgeoning.

How is this app culture changing relationships?

I've seen a rapid shift in gay culture, which is spreading to Tinder and Blendr and so forth in straight culture. I came out very young, but once I was of age, I would go to bars and I would drink myself some courage and I'd walk up to the person I was attracted to and we'd start talking. I find that now that's not what people do. People go to the same bars and they go on the app and they look at who's around them and if they find a person on the app, that's how they approach them. Rather than taking the risk of walking up to someone and putting yourself out there in a way where you could be actively rejected, there's this sort of armored rejection, where someone could just not respond to you. That's like, oh, they didn't respond to me but maybe they're just not looking at the app right now, maybe they have a boyfriend -- there are more excuses you can make that soften the blow of that rejection.

After our first presentation, I talked to people who mentioned that a lot of gay nightclubs are closing because of this. The genesis of modern gay interaction comes from a time when it was really forbidden and people would have to go to these back-alley places; we think of the speakeasy windows with passwords. Then in the '70s, sexual liberation, where it was more out there and the '80s where you could go out in public to clubs. Now that's just not necessary. It facilitates a sexual liberty that is great for a lot of people, and it's complicated for another set of people who may be seeking more heteronormative, traditional relationships.

So why an opera?

When I first was following these stories on Manhunt, I sensed the opera in it. I felt there could be these melodramatically extreme moments. It's a show about four gay men, it's very intimate, but I also consider it an epic and that's because of what the music does and how we treat it. The joke of "Grindr: The Opera" is a funny juxtaposition. That's what I think has gotten us a lot of the attention we've had so far, which is kind of the tag line I came up with, "When class meets crass comes camp." You think of people with pearl necklaces -- not that kind -- and fur coats going to the opera, still, and then you think of Grindr with people sending unsolicited dick pics to total strangers. I think the joke is right there. What I hope is that when people see the show they realize it's not just a joke.

The show, to me, is about culture changing. It's something that I want people to think about and talk about. I think the show ends not with an answer but a lot of questions.

Is there a statement that you're trying to make with the play?

It's the question: How are these things changing? It's so fast. Grindr came into prominence in 2009 -- that's not even a decade ago and it's completely, completely changed the culture. For better and for worse. Again, I think there are great things that come of it. There are people that meet the love of their life on this app. But then there's this other side, not just of rejection but of how easy it is to reject. I think Tinder is actually a better example of this, with how simple it is to swipe left or swipe right. You look at someone's image and dismiss them with a little caption that says, "Nope." That's dark to me.

Speaking to the downsides, there's a committed couple in the play that start to experience outside temptations because of Grindr.

Yes. To touch upon that, another aspect of Grindr that I find fascinating in my own experience and, shall we say, research, it has an addictive quality for certain people, and it did for me. I would wake up in the morning and it would be the first thing I looked at. People say Facebook "likes" cause a dopamine release that makes people happy. Well, layer onto that the matter of romance, of sex, of intimacy. When that's at play, it's like,"I'm going to Philadelphia today, let me see who likes me in Philly? Why am I more popular in Philly than I was in Syracuse?" It's the approval, and when you get it, it's a release. Even if you don't pursue the people, it's, "Oh, someone thinks I'm hot!" We use Grindr as a character that is literally interacting with one of our characters and seducing him. Grindr can be your boyfriend. It's different people telling you different things, but you can treat it like a relationship where you have to check in with it now and then, where it gives you that sort of release that you want.

Our romantic ballad in the show is called, "We Met on Grindr." The theme of that song is, "Finally I met a man worth leaving Grindr for." That's a real shift in the culture. Facebook status too: You change your Facebook status, it means you're official. It's Facebook official. In the gay community, deleting Grindr is a thing -- I've done it. With my most recent boyfriend there was a point where I was like, "We're official, I'm deleting Grindr."

The play features four gay men who fit into various "tribes." The idea of designating tribes is sometimes controversial. Where do you stand on that?

"Tribes" is a thing that Grindr rolled out a while ago and I don't believe they do it anymore, but there was a time when they would allow you to categorize yourself as a twink, a bear, a daddy, average, a jock. To me, that's its own interesting thing and I want to explore how these people get pigeonholed into these tribes. On Grindr, you get maybe the amount of a tweet to describe yourself and what you want. We have the benefit of these songs where these characters can state their intentions and what they seek and why. We're exploring how people wind up in these tribes and come to embrace them or to defy them.

Has your experience on Grindr been mostly positive? I'm assuming, since you're still on there.

It was a learning experience and now that I know what I'm looking for and what other people are looking for, my expectations have adjusted accordingly, it's a great thing. I have a date from Grindr next week.

Do you have anything in your Grindr profile about the fact that you've written the Grindr opera?

My username is GrindrTheOpera. I actually met one of the cast members on Grindr.