"I've never yelled or screamed": Rand Paul explains why it's no big deal he's a jerk to female interviewers

In two Sunday interviews, the GOP candidate was forced to address his treatment of female interviewers 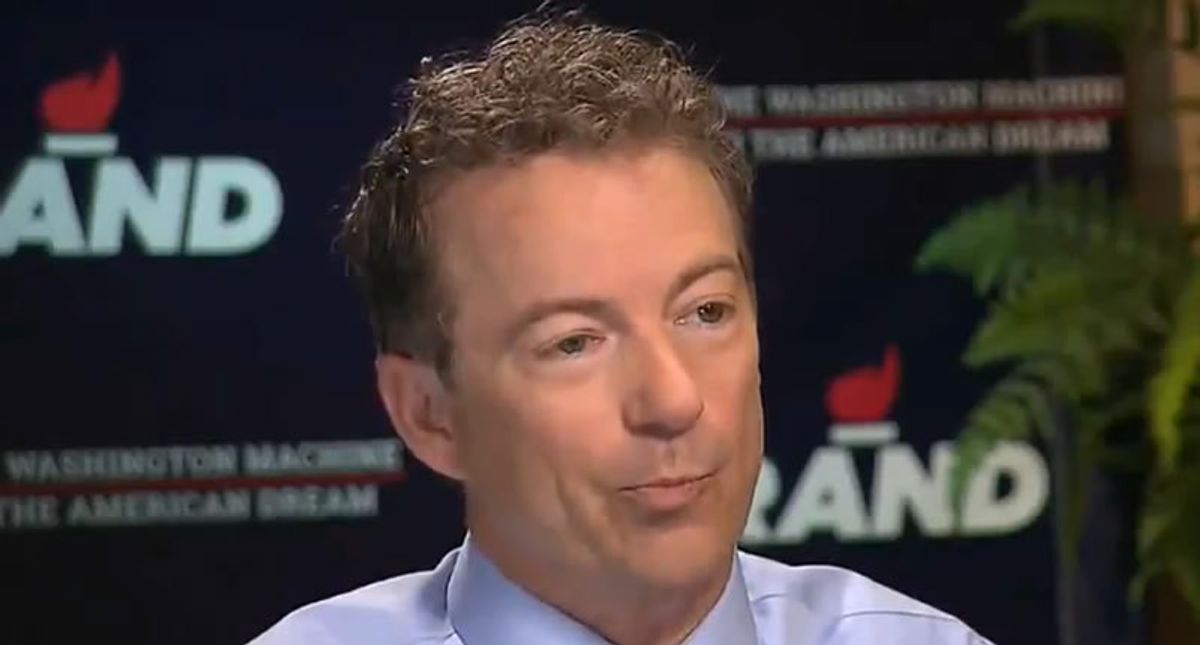 Kentucky Senator and GOP presidential candidate Rand Paul spent Sunday morning answering questions about his treatment of reporters -- particularly female ones -- and how his perceived testiness might impede his ability to the win the White House.

On "Meet the Press," host Chuck Todd began by noting that the only reason they were having this conversation was because of his disastrous interview with NBC's Savannah Guthrie in which Paul accused her of "editorializing" and "talking over me." But Todd quickly offered the Senator an out, saying that Paul had been rude and abrupt with both male and female journalists.

When asked if he needed "to grow a thicker skin," the Senator said that "it depends on when you get me. If I've had my coffee, and had a good night's sleep," at which point Todd cut in, asking "Are you not a morning person?"

After insisting that, as a surgeon, he was indeed a morning person, Paul explained that "most of my profession[al life] has been as a doctor, and you ask me a question and it's about your eyes or a pain you've got, I try to be very direct with my answer."

"Welcome to the NFL," Todd replied.

"I know, I know -- but the thing is, then I push back," Paul said, before talking about how some people approach him with praise for how he "stands up to the liberal media, but how other people, including [his] wife, tell him to 'count to 10' and let them spit out their question even if it is a biased question."

"I think interviewers could be better, but I also think that politicians could be more tolerant of interviewers," Paul added, as if the problem was that journalists like Savannah Guthrie behave petulantly when asking candidates like Paul to clarify their current position on an issue.

"If you were on stage with Hillary Clinton, a female opponent," Bash asked, "are you going to have to pull your punches, given the perception of you now?"

"But," he added, "I can tell you that the interviewers in the past couple of days probably got it easier than what I gave to Eliot Spitzer on your program a year or so ago. I'm unwilling to let people characterize things unfairly, and if someone's going to write an op-ed on me, that's fair for them to do it, but it's also fair for me to set the record straight and say that they're editorializing."

Unsatisfied with that non-answer, Bash asked the question again: "But what if you were on the stage with Hillary Clinton? Would you be cognizant of the fact that she was a female opponent?"

"I'm always polite," he replied. "Even in the interviews where I'm being accused of being too aggressive, I've never yelled or screamed. I've never gotten out of control."

Only then did Paul attempt to answer the question, saying that he "would treat her with the same respect that I would treat a man, but I wouldn’t lay down and say ‘I’m not going to respond.' That would be a sexist sort of response, to say, ‘Oh, my goodness, she deserves to be treated as aggressively because she’s only a woman.’ I would never say that about anybody."

"I don’t come into our interview thinking, ‘OK, it’s a woman-versus-man interview.’ I think she has tough questions, he will ask tough questions -- I have to be prepared."